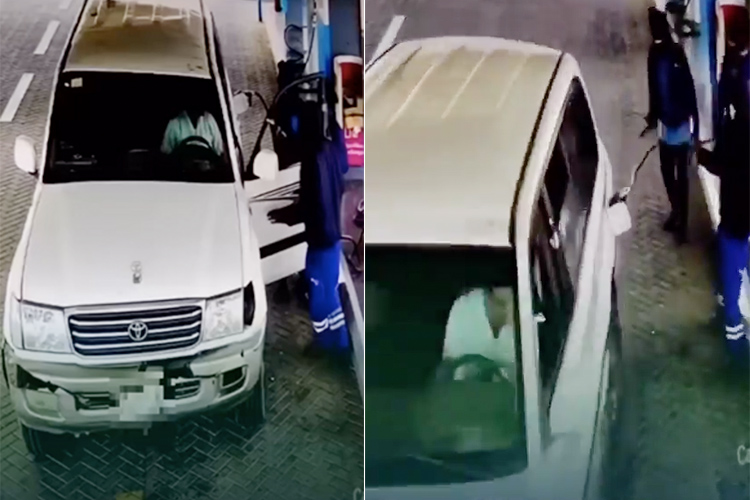 A combo image shows the man driving away in his SUV.

Saudi Arabia security personnel in Abha arrested a man who drove away after filling petrol at a gas station without paying the money.

The driver recklessly drove away even when the filling pipe was in the fuel tank causing it to snap away, putting the lives of workers in danger.

The man also brandished a weapon at the workers, according to security personnel.

The video shared by of the Ministry of Interior showed a person filling the fuel tank. He then drives away without paying the money, and he displayed some sort of weapon at a worker at the fuel station west of Abha.

The act caused major damage to the station.

The security patrol team tracked the culprit and arrest him.

The authorities said necessary measures would be taken against him. The case was transferred to the Public Prosecution.

Saudi authorities have urged members of the public to adhere to laws and regulations.

In February, a video clip went viral of an overspeeding pickup truck crashing on the roadside in Saudi Arabia.

The details of the incident revealed that the driver of a Toyota Hilux pickup was overspeeding, and overtaking other cars from the wrong side. The truck ultimately veered off the road and crashed near a petrol station in the eastern province of Jazan.