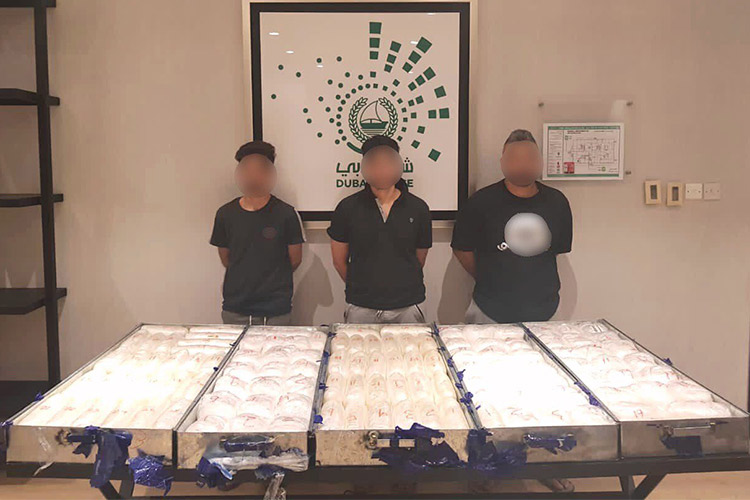 The suspects with the seized drugs.

Dubai Police have foiled a bid by an international criminal gang to smuggle 123 kilogrammes of crystal meth into the country.

The drugs were hidden in the lower bottom of a refrigerated shipping container arriving from an Asian country.

Dubai Police nabbed three gang members red handed as they were were trying to fit the smuggled drugs in the bottom of the container in preparation for the final delivery.

Dubai Police codenamed the whole operation as ‘the Fridge.’

The culprits were acting on the instructions of their leader who is based in an Asian country.

Brigadier Eid Mohammed Thani Hareb, Director of Anti-Narcotics Department at Dubai Police, said they were tipped off an Asian criminal gang located inside the country.

“We’ve learned that the gang were expecting a shipment of drugs concealed in a container designated for transporting fruits and vegetables on a ship arriving from an Asian country,” Hareb added.

Hareb said they immediately assigned the case to a specialised task force. “We made sure all legal measures were also taken including a permission from the Dubai Public Prosecution to arrest and search the suspect, as well as inspecting their vehicle and residence” he added.

Hareb further explained that they coordinated with the Sharjah Police and Sharjah Customs in order to facilitate the team’s mission and to intensify the surveillance on the suspected refrigerated container.

Hareb pointed out that the fruit and vegetable merchant came to the seaport and received the container and unloaded the shipment into the Fruit & Vegetable Market.

However, the merchant was unaware that the gang had exploited his container to hide 123 kilograms of crystal meth at the bottom.

“After unloading the container, the merchant placed it in a sandy yard designated for parking and queuing containers. Meanwhile, the undercover Anti-narcotics team maintained close surveillance and waited for the gang members to come for their illegal shipment,” Hareb added.

“One night, three individuals approached the yard and started looking for the refrigerated container.”

“As they proceeded to unload the drugs, our Anti-drug team took them by surprise and arrested the suspect red-handed and foiled their desperate escape attempt,” Hareb continued.

Hareb said during investigations, the suspects admitted that they were directed by their leader, who lives in an Asian country, to unload the drugs and hide them for some time until they have received new instructions for the final delivery.

The suspects also confessed that they carried out that operation in return for Dhs12,000.

The director of the Anti-Narcotics Department at Dubai Police praised the cooperation and coordination with Sharjah Police, pointing out that these joint efforts are key to ensuring the safety and security of our nation.

He added they always work closely with their local, regional, and international counterparts to protect societies against drugs dealers and promoters.

Lieutenant General Abdullah Khalifa Al Marri, the Commander-in-Chief of Dubai Police, confirmed that Op “The Fridge” is another example of the force’s continuous effort to combat and thwart the schemes of drug dealers and promoters who seek to spread their toxins among the youth.

“The safety and security of the UAE community is a line that shan’t be crossed.”

“Our Anti-narcotics officers are always ready and will spare no effort to eradicate these harmful toxins and handover drug dealers and smugglers to justice,” A Marri vowed.

Major General Expert Khalil Ibrahim Al Mansouri, Assistant Commander-in-Chief for Criminal Investigation Affairs, said the fruitful cooperation between anti-drug agencies at the state level has been a key factor in thwarting criminals attempts to smuggle and promote drugs into the country.

The defendant was arrested along with the victim, who was drugged with Amphetamine and Methamphetamine drugs for mysterious reasons. 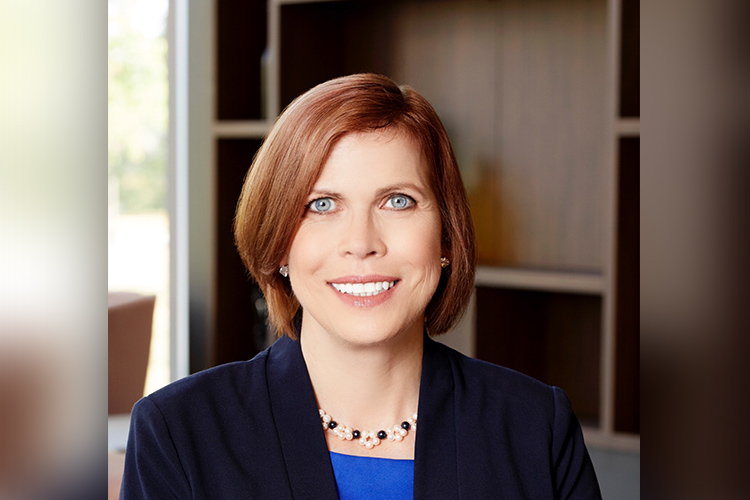 The Sharjah Ruler said that the new chancellor, Susan Mumm, was selected after an extensive international search.