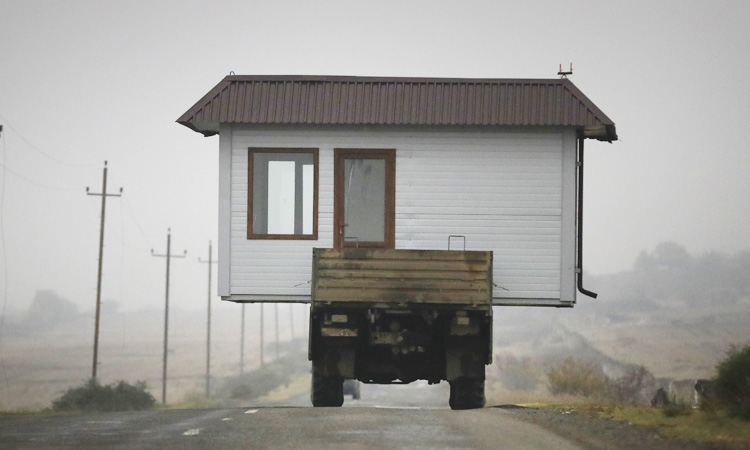 A family drives a truck loaded with a small house as they leave their home village, Nagorno-Karabakh. Sergei Grits/AP

Azerbaijan said on Friday its troops had entered a district bordering Nagorno-Karabakh handed back by Armenian separatists after almost 30 years as part of a Russian-brokered peace deal to end weeks of brutal fighting in the region.

Armenia will also hand over the Kalbajar district wedged between Nagorno-Karabakh and Armenia on Nov.25 and the Lachin district by Dec.1. 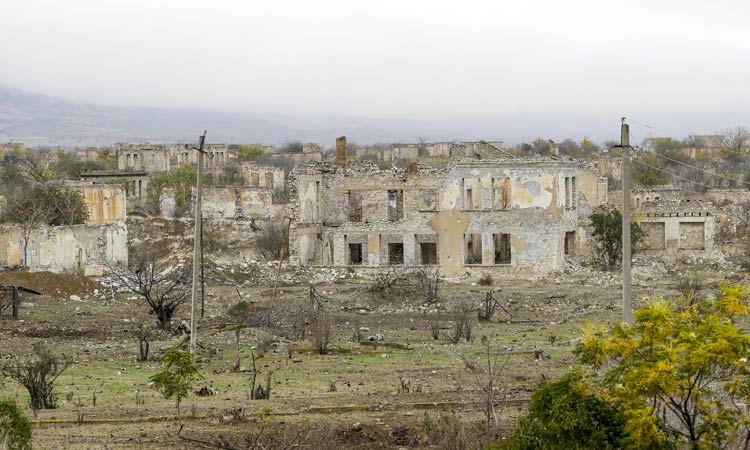 A view of a vast expanse of jagged concrete and houses reduced to shells in Agdam, Nagorno-Karabakh.

On Thursday Armenian residents of Aghdam hurriedly picked pomegranates and persimmons from trees surrounding their homes and packed vans with furniture, before fleeing ahead of the official deadline to cede the mountainous province.

“We wanted to build a sauna, kitchen. But now I had to dismantle everything. And I’ll burn down the house with everything I own when I leave,” Gagik Grigoryan, a 40-year-old electrical worker, told a media before abandoning his home.

Fierce clashes between Azerbaijan’s forces and Armenian separatists broke out in late September in the Nagorno-Karabakh region. The brutal war lasted six weeks, leaving thousands dead and displacing many more. 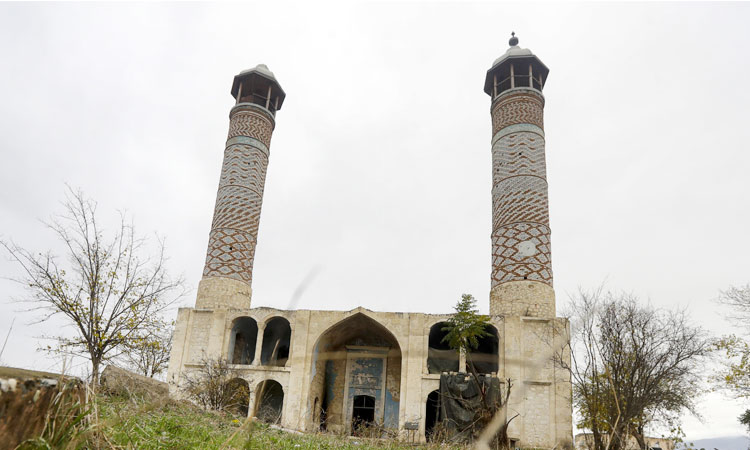 The Aghdam Mosque in Agdam is seen, Nagorno-Karabakh.

The longstanding ex-Soviet rivals finally agreed to end hostilities last week under the framework of a Russian-brokered accord that sees Moscow deploy peacekeepers to the region and requires Armenia to cede swathes of territory.

Separatists in Nagorno-Karabakh and several surrounding districts captured the territory and claimed independence that has not been recognised internationally, even by Armenia, following a post-Soviet 1990s war that left some 30,000 dead.

As part of last week’s peace deal, Armenia agreed to return some 15 to 20 per cent of the Nagorno-Karabakh territory captured by Azerbaijan in recent fighting, including the historical town of Shusha.

The exchange of territory was originally due to begin on Sunday, with Armenians in the Kalbajar district fleeing en masse before the official deadline for Azerbaijan’s takeover. 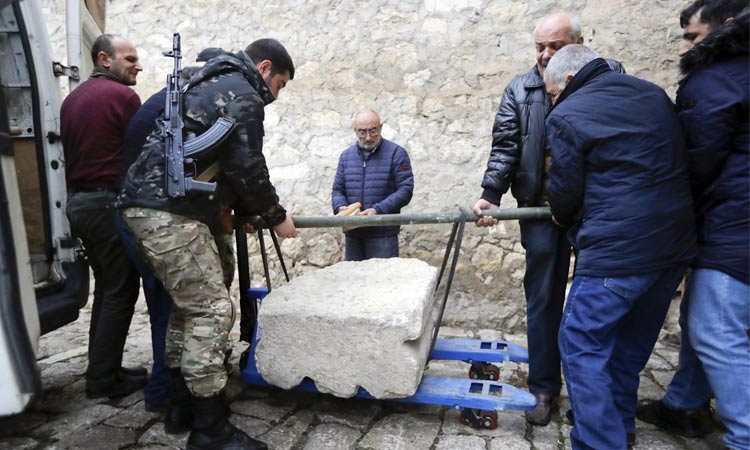 Armenian workers labor to remove a carved stone at Tigranakert, a ruined Armenian city dating back to the Hellenistic period.

But Azerbaijan’s President Ilham Aliyev postponed the deadline by one week over “humanitarian” considerations.

The Russian peacekeeping force of some 2,000 troops has deployed to the administrative centre of the region, Stepanakert, and set up checkpoints and observation posts along the strategic Lachin corridor connecting Nagorno-Karabakh with Armenia.

While Armenians in the provinces to be handed over to Azerbaijan have left in an exodus, the Russian mission on Thursday said it had bussed some 3,000 residents back to Stepanakert and other regions who had fled during the six weeks of heavy shelling.

Most of Azerbaijan’s south-western district of Aghdam has been under the control of Armenian separatists since 1993. Before the post-Soviet war it was inhabited by some 130,000 people— mostly ethnic Azerbaijanis who were expelled from their homes.

Armenia’s health ministry said earlier this week that more than 2,400 of the country’s fighters had been killed in the fighting. Azerbaijan has not revealed its military fatalities.

After the peace accord was signed last week, Russian President Vladimir Putin said total fatalities that include dozens of civilians had surpassed 4,000 people.

Russia’s decisive role in the settlement has sidelined international players the United States and France, which brokered a ceasefire in the 1990s but failed to deliver a long-term resolution.

During the most recent conflict, France, the United States and Russia attempted to broker three separate ceasefires that collapsed as Armenia and Azerbaijan accused the other of violations.

French President Emmanuel Macron this week urged Russia to clarify “ambiguities” over the Moscow-brokered ceasefire, including Turkey’s role in the peacekeeping mission.

Azerbaijan has insisted on a prominent role for its staunch ally Turkey, which was widely accused by Western countries, Russia and Armenia of supplying Baku with mercenary fighters from Syria over the weeks of fighting.

The Kremlin has poured cold water on Ankara’s hopes of deploying peacekeepers alongside Russian troops in Nagorno-Karabakh and surrounding provinces and instead insisted that Turkey would observe the truce from monitoring posts in Azerbaijan. 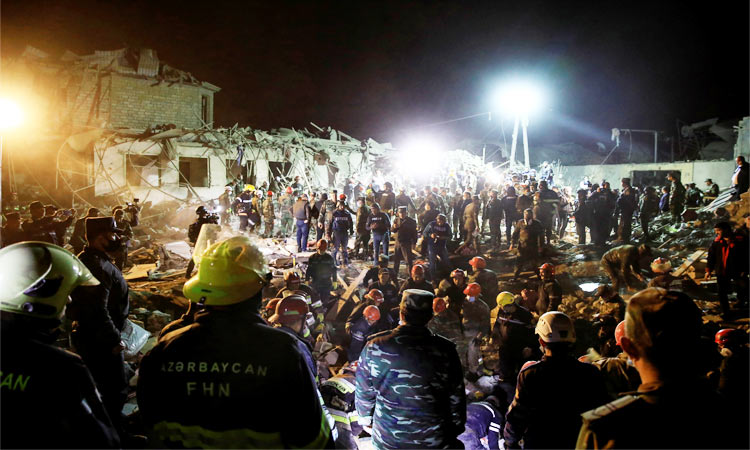