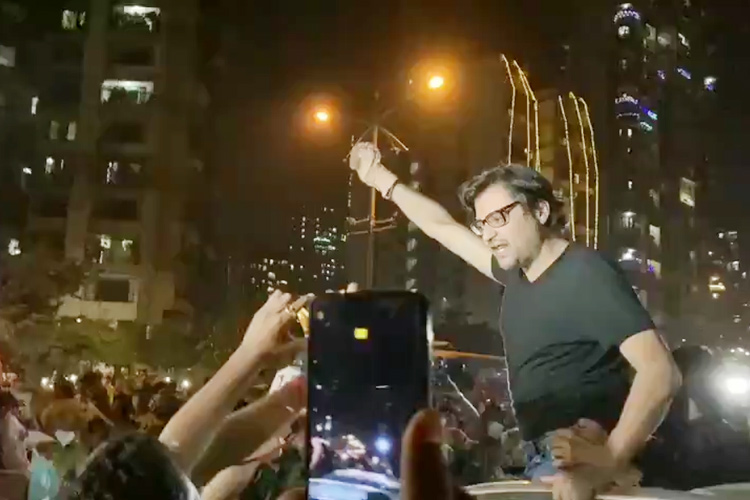 Arnab Goswami gestures to the crowd out the jail.

Loud-mouth Indian anchor Arnab Goswami has been granted bail from the Supreme Court of India on Wednesday.

Arnab was released from the Taloja Central Jail in Raigad late on Wednesday night.

The Republic TV Managing director and Editor in Chief was arrested on Nov.4 for his involvement in a case of abetment to suicide.

Arnab has been accused of putting pressure on Mumbai architect Anvay M. Naik and his mother Kumud Naik. The mother and son committed suicide on May 5, 2018 in Alibaug.

The nationalist TV channel manager flashed a 'V' sign and punching in the air several times enroute his car out the jail.

Arnab called his arrest as "illegal." He told media a journalist and his TV channel can’t be stopped by force.

The famed anchor said he was ready to go on air.

Arnab told mediapersons that this is a victory for the people of India from his car.

He was in good health and preparing for a media interview with his staff.

The Republic TV has a reputation for usually shouting down guests at its debates.

The channel said the 2018 case was made-up by local government.