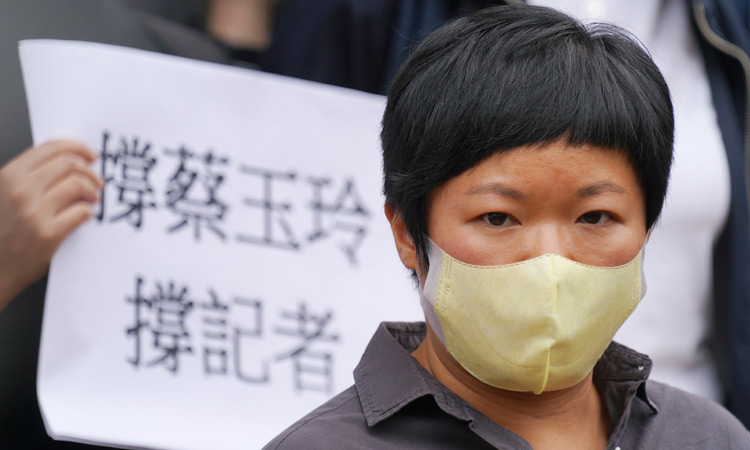 Choy Yuk-Ling stands in front of supporters holding up placards outside the court in Hong Kong. Lam Yik/Reuters

A Hong Kong journalist appeared in court on Tuesday on charges of making false statements while obtaining information from a vehicle database, amid growing concerns that press freedom is at risk in the semi-autonomous Chinese city.

Choy Yuk-ling, a producer at public broadcaster Radio Television Hong Kong, was arrested earlier this month on charges of making false statements about why she was obtaining license plate information from a publicly accessible database.

She was previously involved in the production of an investigative documentary into the behavior of Hong Kong police during last year's anti-government protests, after the force was accused of not intervening during a violent clash between protesters and a mob of men in a subway station.

Ahead of her court appearance, Choy told reporters the case was a matter related to public interest and press freedom in Hong Kong.

“There has been a very strong social understanding … that journalists are free to obtain public information for the sake of public interest,” she said. “I didn’t see any reason that the government has to restrict the flow of information.”

She said that many scholars, unions and lawyers have expressed concerns as to whether the police are using the law to suppress press freedom.

Members from an RTHK union, as well as supporters and pro-democracy activists, held up placards in support of Choy, some of which read “Journalism is not a crime” and “Without fear of favour.”

Choy's case was adjourned until Jan.14 to give the police more time to investigate, and she was released on bail.

Media groups are concerned Hong Kong's new security law, which outlaws secession, subversion and foreign collusion to interfere in the city's internal matters, could be used against journalist reporting on issues thought to be related to national security.

The U.S. and others have denounced the law imposed by Beijing as an attack on Hong Kong's autonomy and freedoms. The US State Department on Monday announced sanctions against additional Chinese officials over the crackdown.