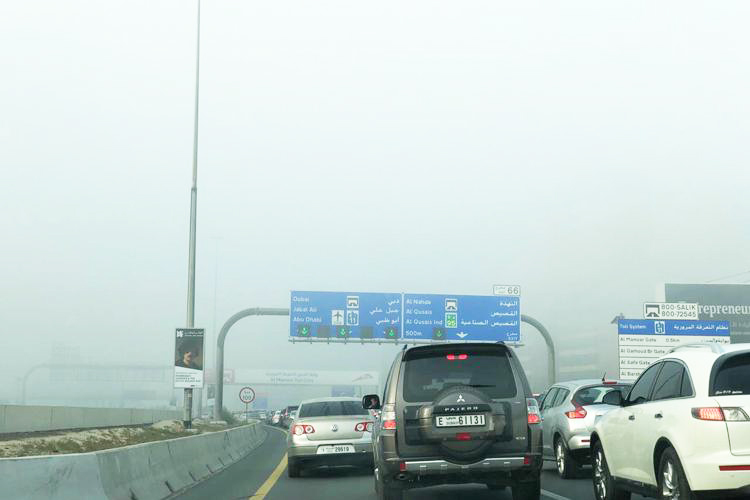 Dense fog covered various areas of the country on Monday morning affecting the horizontal visibility, particularly the inland and central parts where it declined to very low levels.

Keeping the fog in view, the Abu Dhabi Police have activated a system to reduce the speed to 80 km/h for 5 hours.

Fog continued to form on Nizwi area and  Al Maktoum Airport in Dubai, and on the Abu Dhabi International Airport, and Madinat Zayed in Al Dhafra.

The National Centre of Meteorology (NCM) has indicated that the fog could continue for the next four days.

It said the weather on Tuesday and Wednesday would be fair to partly cloudy at times, humid by night and the early morning with a chance of fog and mist formation over some coastal and internal areas.

Light to moderate northeasterly to northwesterly winds are expected, with a speed of 10-20, reaching 30km/hr. The waves would  moderate in the Arabian Gulf and in the Oman Sea, the NCM added.

The weather on Thursday is expected to be fair to partly cloudy at times, the NCM said, noting that it would be humid by night and Friday morning with a probability of fog and mist formation over some coastal and internal areas.

The winds would be light to moderate northeasterly to northwesterly, with a speed of 10-20, reaching 30km/hr. The sea would be slight in the Arabian Gulf and in Oman Sea, the NCM added.

It continued, “The weather on Friday will be fair to partly cloudy at times. Humid by night and Saturday morning over some coastal and internal areas.”

The speed of the winds would be the same as above. The sea conditions in the Arabian Gulf and in Oman Sea would also be similar to the aforementioned pattern.

The NCM warned motorists of the fog formation and the lack of horizontal visibility, calling upon road users on the internal and external roads leading to those areas to be careful, and to exercise precautions for the sake of public safety.

On their part, the Abu Dhabi Police on Monday morning activated a system to reduce the speed to 80 km/h for 5 hours, starting from 3:21am until 8:49am on the roads of Abu Dhabi - Al Ain and Sheikh Mohammed Bin Rashid due to fog.

The police explained that the speed reduction system cuts the regular speed on the roads to 80 km/h during volatile weather conditions such as dense fog, strong winds, heavy rain, and the low horizontal visibility (less than 200 metres). The system is part of the police’s proactive plan to provide best practices in traffic safety during those circumstances.