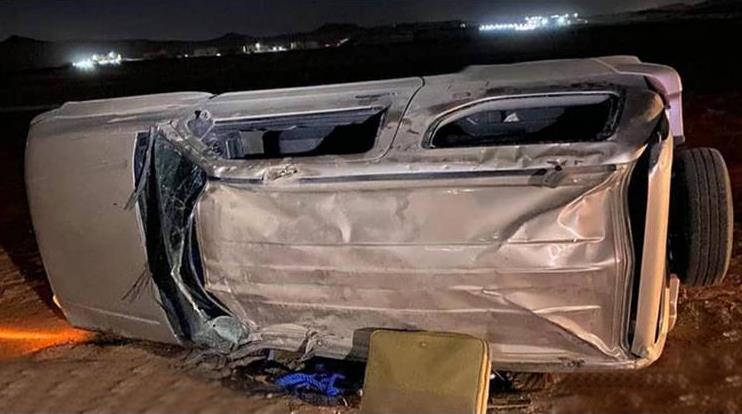 The damaged SUV sits on the side of the road in Ras Al Khaimah.

In a tragic accident, a 12-year-old Emirati boy died after the vehicle he was travelling in crashed in Ras Al Khaimah on Thursday evening.

A 13-year-old boy was driving the vehicle. The teen did not have a driving licence.

The teens, 13 and 11-year-old sustained serious injuries in the accident that took place near Al Gheil Road.

The operations room of RAK police received a call about the accident at 8:30pm on Thursday, indicating that a speeding car lost control and flipped over on the side of the road.

Ambulances and police patrols rushed to the site.

The 12-year-old Emirati boy died on the spot.

The two injured boys were transferred to Al Dhaid Hospital in Sharjah.

The body of the deceased boy was handed over to the family for burial.

Last week, a 20-year-old Emirati youth died in a collision between two vehicles in Azen area of Ras Al Khaimah.

The victim died on the spot as result of the severe wounds, which he sustained in the crash, according to Director of Traffic and Patrols Department at the Ras Al Khaimah Police, Brigadier Ahmed Al Summ Al Naqbi.

The Ras Al Khaimah Police announced that six drivers were arrested, after they had been monitored driving recklessly posing risks to their lives as well as lives of others. This happened in different areas of the emirate, during a traffic campaign that will continue daily for a month, especially during the late hours.

The traffic campaign has been launched under the slogan (traffic safety is a requirement and a goal to spread traffic awareness and to promote positive behavior among drivers) under the directives of Maj. Gen. Ali Abdullah Bin Alwan, Commander-in-Chief of Ras Al Khaimah Police to make roads safer.

The police, in cooperation with the Traffic and Patrols Department, have activated all the radar equipment in the emirate to check whether motorists violate rules by changing lanes at traffic intersections. Those who step out of line will be penalised.

Brigadier General Ahmed Al Samam Al Naqbi, Director of Traffic and Patrols Department at Ras Al Khaimah Police, stated that a monitoring device has been activated to keep a tab on whether the light vehicle is sticking to the mandatory lane at all intersections in the emirate.