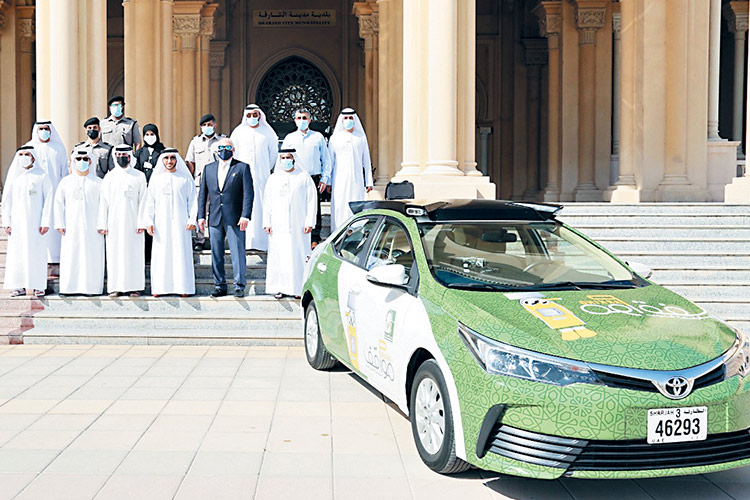 Sharjah Municipality officials stand next to the digital scanning vehicle.

The Sharjah Municipality on Saturday launched two digital scanning vehicles to inspect public parking lots and to monitor all violations on the roads of the city of Sharjah. The move is considered the first of its kind constituting a qualitative leap in service provision.

These vehicles are equipped by a sophisticated technology that allows scanning vehicle plates and monitoring all violations accurately, so that it will help save time and effort for inspectors.

During the launch of the two vehicles, Thabet Al Tarifi, Director General of the Sharjah City Municipality, confirmed that the digital scanning vehicles reflect the orientation of the Sharjah City Municipality in digital transformation and the use of the best means in inspecting public parking in an accurate manner and employing modern technologies.

For his part, Khalid Bin Falah Al Suwaidi, Assistant General Director for Customer Service, explained that the launch of these vehicles comes with the installation of more than 400 touch-enabled fee payment devices that are compatible with the advanced digital technologies applied in the digital scanning vehicles.

The smart cameras in the digital scanning vehicles can identify the car numbers that are entered through the touch screens of the fee payment devices, Al Suwaidi added.  He further indicated that other vehicles would be launched simultaneously with the completion of the installation of the 1,070 touch-enabled fee payment devices in all areas of the Sharjah city by the first quarter of next year.

In the meantime, Ali Ahmed Abu Ghazeen, Director of the Public Parking Department at the Sharjah City Municipality, said that those vehicles would operate in the areas that were covered with touch payment devices.

“The vehicles’ mechanism of operation is compatible with these devices, as they can scan up to 3,000 vehicles per hour and recognize vehicles whose owners paid the fees through e-tickets and those of seasonal subscriptions and SMSs.”

Abu Ghazeen noted that those vehicles give a grace period for the public to park in the public parking for a period of 10 minutes without paying fees. The vehicles can read the plates and know if the vehicle exceeded this period without paying the fees through a processor, which stores images and sends them to the follow-up office in the parking department. Then, an alert would be sent to the inspector providing him with the specific location of the vehicle and a photo of it, so that the necessary action could be taken, he added.

The new paid parking spots were prepared according to the highest standards as part of the municipality's continued efforts to provide public parking spaces around the clock throughout the city of Sharjah, especially in the vital zones.