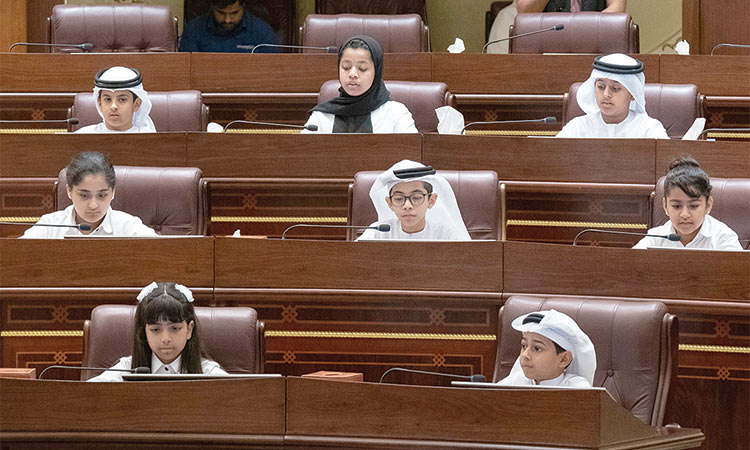 Sharjah Children Parliament, an initiative by Sharjah Children – a subsidiary of Rubu' Qarn Foundation for Creating Leaders and Innovators, will hold the closing ceremony of its 16th edition on Wednesday (Oct.28) at 5:00pm via video conferencing platform Microsoft Teams, to showcase the highlights and achievements of the current edition.

The closing ceremony will bring together 60 young parliamentarians aged 8-11 years who were elected from all Sharjah Children centres across the emirate, and will offer them a platform to express their views on the current edition and ideas to develop and improve the upcoming edition.

Aysha Ali Al Kaabi, Acting Director of Sharjah Children, said: “Since its inception in 1997, Sharjah Children Parliament has been integral to the development journey of many children in Sharjah, in line with the directives of His Highness Dr Sheikh Sultan Al Qasimi, and under the patronage of Her Highness Sheikha Jawaher Al Qasimi. The Parliament has proudly graduated 16 batches of children, enhancing their potential to better understand the reality of the world around them, and empowering them to raise and discuss issues, views and concerns of common interest, and understand how they can effectively contribute to decision-making processes.”

“Active participation in the various sessions of the Parliament has helped build the skills of the young generation. They now better understand the needs of the future, and have a keener sense of responsibility and loyalty towards the community and our country. Today, many of our graduates are successful students and leaders in various government entities.”

The inaugural session of the 16th edition was held in April 2019 in the presence of His Highness the Ruler of Sharjah, where members discussed how to preserve and enhance the emirate’s environment and ensure a safe and healthy lifestyle for the community.

At the second session, members of both Sharjah Children and Sharjah Youth Parliaments took part in a panel discussion themed “Youth and Volunteering”, as part of Youth City 2030 in Bahrain.

Themed ‘Let us unite as friends against bullying’, the third session discussed the impact of bullying on an individual’s mental and emotional health. Additionally, members highlighted the role of educational and executive bodies in preventing and addressing incidents of bullying and introducing children to their responsibilities in reporting incidents.

In April 2020, Sharjah Children Parliament and Sharjah Youth Parliament convened in a joint virtual closing session of the two parliaments and called for stepping up efforts to raise awareness of abuse and violence against children. Attended by a host of officials and experts, the session explored all forms of child abuse, and highlighted the impact of the UAE’s child protection law (Wadeema’s Law) in curbing this societal problem, while also discussing measures to increase the effectiveness and response of relevant authorities.