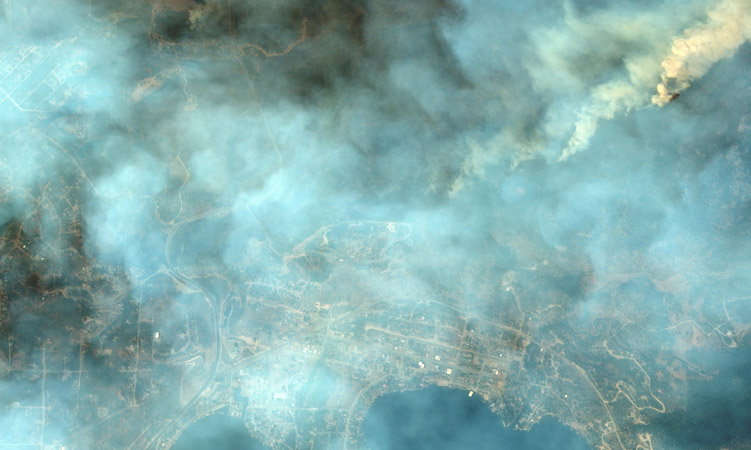 A satellite image shows smoke from the East Troublesome wildfires at Grand Lake in Colorado, US. Reuters

An explosive Colorado wildfire that has already forced the evacuation of several mountain communities and the closure of Rocky Mountain National Park blackened another 45,000 acres (18,200 hectares) on Thursday as it jumped the US Continental Divide.

The East Troublesome Fire, which broke out on Oct.14, has now burned 170,000 acres (68,800 hectares) and was only about 5% contained as of Thursday afternoon, incident commander Noel Livingston said at a news briefing.

The flames have spread into Rocky Mountain National Park, prompted the National Park Service to close the entire 415 square-mile (668-square-km) expanse and the blaze has become the second-largest on record in Colorado.

The closure of the national park is in addition to more than one million acres of wilderness in Colorado that the US Forest Service, the Bureau of Land Management and state authorities have deemed off limits to the public.

The National Weather Service was forecasting continued hot, dry, windy conditions in much of Colorado, but snow and much colder weather are expected this weekend.

Grand County Sheriff Brett Schroetlin has ordered evacuations in the area, including the tiny lakeside community of Grand Lake, which has a population of about 470.

The fire is among the latest in a brutal fire season following a long period of drought across Colorado. The cause remains under investigation.

Further north, the Cameron Peak Fire has been burning since mid-August, setting the state record for largest wildfire. It has burned more than 207,000 acres (83,770 hectares) overall and scorched swaths of Arapaho and Roosevelt National Forests.

The two fires are just 18 km (11 miles) apart, but Livingston said it was unlikely they could merge into a massive conflagration.

On Tuesday, helicopters rescued 23 hikers and three dogs from San Juan National Forest where the small but dangerous Ice Fire had broken out on Monday in Colorado's southwestern corner near the small former mining town of Silverton.