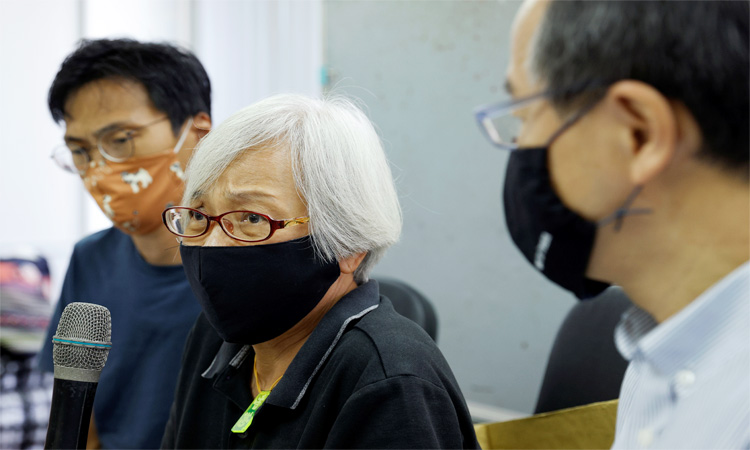 A Hong Kong protester dubbed “Grandma Wong” said on Saturday that Chinese authorities kept her in custody for a month and a half across the border in Shenzhen, where she allegedly suffered mental abuse, and then prevented from coming back for over a year.

Grey-haired and bespectacled Alexandra Wong, 64, had been a familiar face at anti-government protests in Hong Kong last year, often waving a large British flag, but she disappeared from the streets around August last year.

Activists and human rights groups had expressed concern over her whereabouts.

Speaking to media for the first time since her release after completing 14 days in quarantine, Wong said she had been detained by Chinese police when she tried to return to her home in Shenzhen on August 14, 2019.

During about one and a half months detention at various centres, where up to 26 people would sleep in a room of less than 200 square feet, Wong said she was being interrogated almost every day about the Hong Kong protests.

“I didn't know what crime I committed,” Wong said.

The Shenzhen Municipal Public Security Bureau could not be reached for comment.

After the detention, Wong said she was sent to the northwestern province of Shaanxi for a five-day patriotic camp in late September last year.

Until early this month, Wong had been restricted by authorities from returning to Hong Kong, pending a trial that never took place in the end. She stayed in her home in Shenzhen where she would get regular visits by the national security officers, she added.

“I was scared I would be stopped from coming back to Hong Kong... I was scared everyday something might happen again everyday day,” Wong said.

Wong called for the release of the 12 activists who were intercepted at sea in late August by mainland authorities as they tried to flee by boat to Taiwan.

“I'm worried about the 12 young people; their treatment could be worse than me.”