US military says S.Korean workers may be laid off amid row over costs - GulfToday

US military says S.Korean workers may be laid off amid row over costs 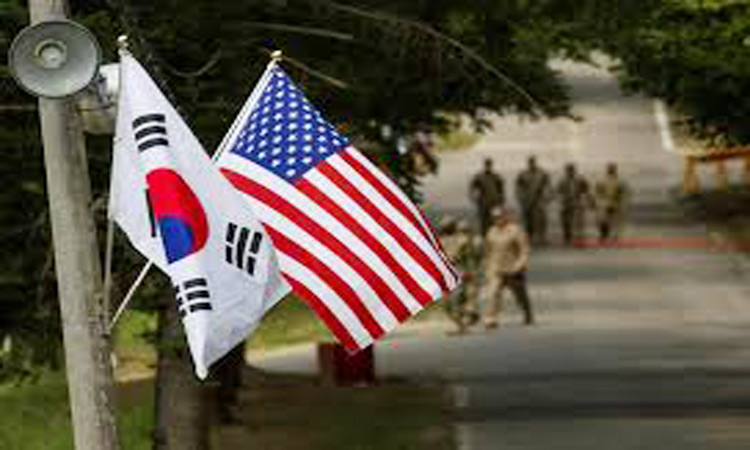 The S.Korean and American flags fly next to each other at Yongin, S.Korea. File photo/Reuters

The US military will put nearly 9,000 South Korean workers on unpaid leave from April in the absence of an agreement on the sharing of costs of maintaining 28,500 US troops in South Korea, it has told the government.

The allies are at odds over how much of the cost South Korea should shoulder to accommodate US Forces Korea (USFK), a legacy of the 1950-53 Korean War that ended in an armistice, not a peace treaty.

Negotiations have made little progress even after the previous deal, the Special Measures Agreement (SMA), expired at the end of 2019.

The workers, who are mostly employed at US bases, were put on unpaid leave in April, which led to a temporary agreement in June to let South Korea fund some 4,000 of them.

USFK, in a Oct.5 letter to the labour ministry seen by Reuters, said temporary funding would expire on Dec.31 and it could only pay the workers until March.

“We still face a labour funding deficit for the rest of calendar year 2021,” the US military said.

President Donald Trump has said South Korea should pay more and the disagreement raised the prospect that he could push to withdraw at least some US troops, as he has done elsewhere.

Cost-sharing talks were a major sticking point during an annual security meeting this week between Defence Minister Suh Wook and US Secretary of Defence Mark Esper in Washington.

They said in a statement they had agreed to finalise a deal, citing “the impact of the lapse on the alliance”, but failed, for the first time since 2008, to stipulate pledges to “maintain the current force level of USFK.”

A South Korean military official said Esper had expressed concern the absence of a deal could “impact our joint readiness.”

“But they also reaffirmed 'unshakable commitment' to the combined defence in the statement, that's what we focus on instead of the mere number of troops.” said the official, who declined to be identified.