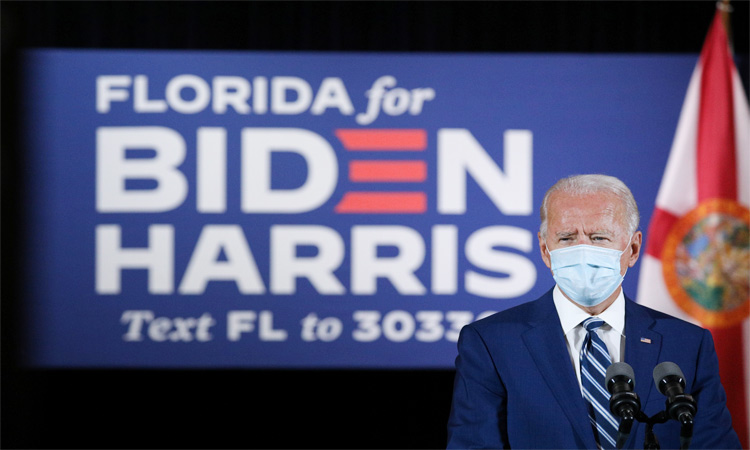 Democrat Joe Biden and his party raised a record-shattering $383 million in September for his presidential bid, likely bolstering his financial advantage over President Donald Trump ahead of the Nov.3 election.

The campaign had $432 million in cash at month’s end for the final five weeks of the race, campaign manager Jen O’Malley Dillon said on Twitter.

The haul outstripped the $365 million that Democrats raised in August, which was itself a monthly record for any US presidential campaign.

“To every person who chipped in a few dollars last month - thank you,” Biden wrote on Twitter in announcing the sum. “I’m incredibly humbled.”

Biden has held a significant lead over Trump in national polls for months, although Reuters/Ipsos polling shows a somewhat closer race in the battleground states likely to decide the winner.

The Trump campaign has not yet announced its September total, but it pulled in $210 million in August along with the Republican National Committee. As of Aug. 31, Democrats had $466 million available to spend on the presidential race, compared with $325 million for Republicans.

The latest figures cap a stunning turnaround for the Biden campaign, which emerged from a crowded Democratic primary field earlier this year with little cash. The Trump campaign, which began raising money almost as soon as he took office in 2017, had once appeared to be a financial juggernaut.

But Democratic voters’ intense desire to defeat Trump’s re-election campaign has driven a wave of donations up and down the ballot.

The results of Biden’s fundraising power were on display in September, when Biden ran nearly $148 million in advertisements on television and radio, while Trump’s spending was less than $56 million, according to Advertising Analytics LLC, a market research company.

Biden’s campaign has sought to use his edges in polling and money to expand the electoral map, running ads in states like Ohio and Iowa that were once thought to be out of reach.