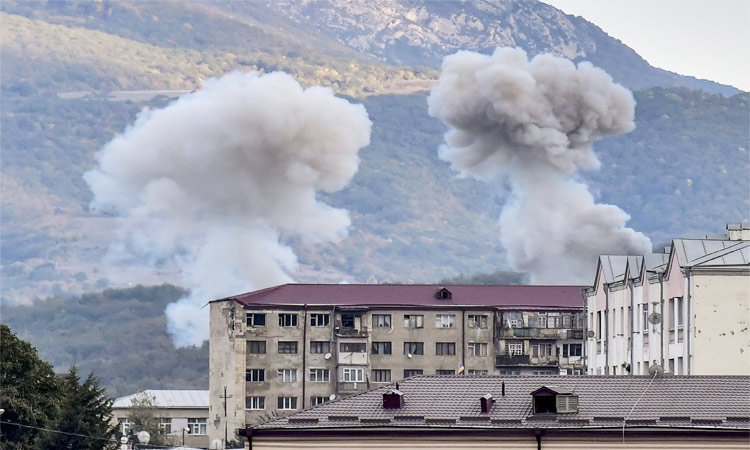 With Russia’s mediation, Azerbaijan and Armenia agreed to a cease-fire in Nagorno-Karabakh starting at noon on Saturday following two weeks of heavy fighting that marked the worst outbreak of hostilities in the separatist region in a quarter-century.

The countries’ foreign ministers said in a statement that the truce is intended to exchange prisoners and recover the dead, adding that specific details will be agreed on later.

The announcement followed 10 hours of talks in Moscow sponsored by Russian Foreign Minister Sergey Lavrov, who read the statement. It stipulated that the cease-fire should pave the way for talks on settling the conflict. 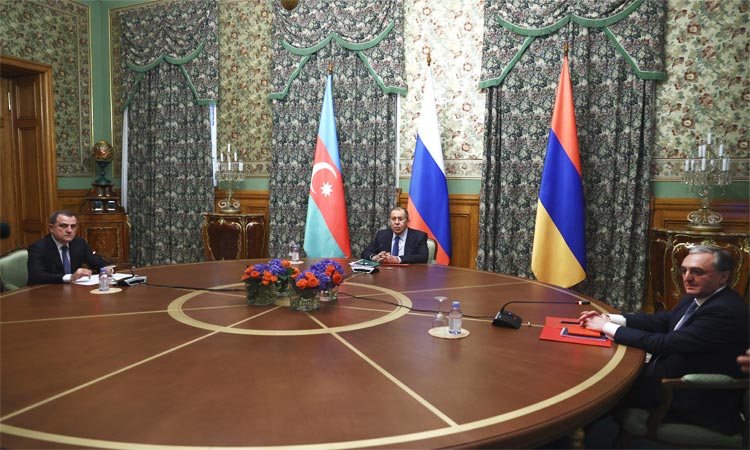 If the truce holds, it would mark a major diplomatic coup for Russia that has a security pact with Armenia but also cultivated warm ties with Azerbaijan.

The latest outburst of fighting between Azerbaijani and Armenian forces began Sept.27 and left hundreds of people dead in the biggest escalation of the decades-old conflict over Nagorno-Karabakh since a separatist war there ended in 1994. The region lies in Azerbaijan but has been under control of ethnic Armenian forces backed by Armenia.

The talks between the foreign ministers of Armenia and Azerbaijan were held on invitation from Russian President Vladimir Putin, who brokered the cease-fire in a series of calls with President Ilham Aliyev of Azerbaijan and Armenia’s Prime Minister Nikol Pashinian. 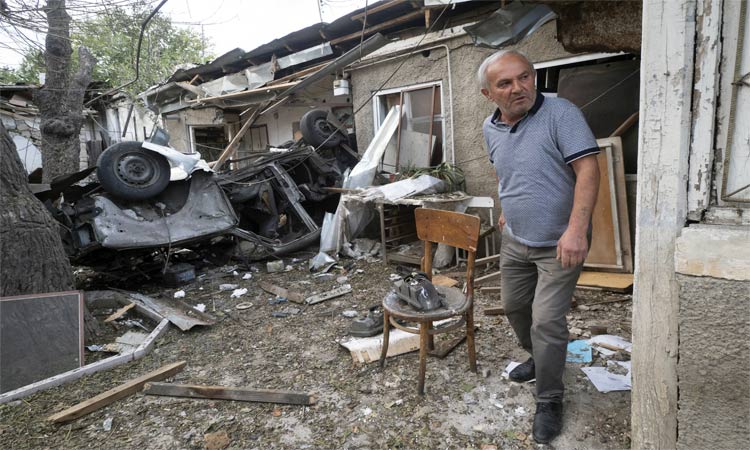 A man walks in the yard of a house destroyed by shelling in Stepanakert. AP

Armenia said it was open to a cease-fire, while Azerbaijan previously had made a potential truce conditional on the Armenian forces’ withdrawal from Nagorno-Karabakh, arguing that the failure of international efforts to negotiate a political settlement left it no other choice but to resort to force.

Russia has co-sponsored peace talks on Nagorno-Karabakh together with the United States and France as co-chairs of the so-called Minsk Group, which is working under the auspices of the Organization for Security and Cooperation in Europe.

Speaking in an address to the nation on Friday hours before the cease-fire deal was reached, the Azerbaijani president insisted on his country’s right to reclaim its territory by force after nearly three decades of international talks that “haven’t yielded an inch of progress.” 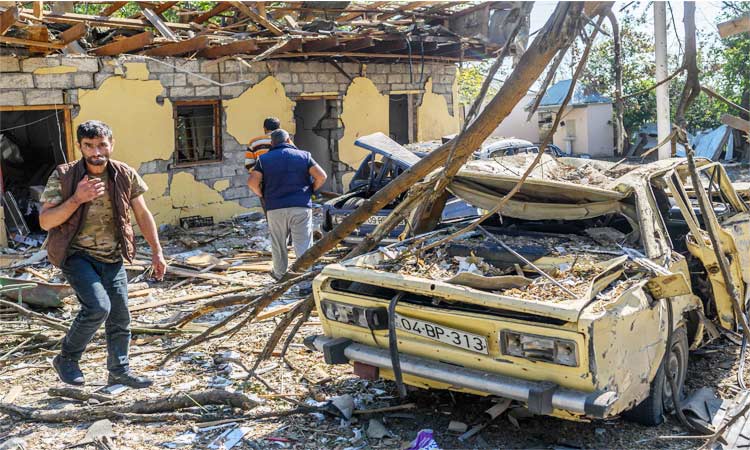 Local residents stand near a damaged car in Barda. AFP

“Mediators and leaders of some international organizations have stated that there is no military solution to the conflict,” Aliyev said. “I have disagreed with the thesis, and I have been right. The conflict is now being settled by military means and political means will come next.”

The current escalation marked the first time that Azerbaijan’s ally Turkey took a high profile in the conflict, offering strong political support. Over the past few years, Turkey provided Azerbaijan with state-of-the-art weapons, including drones and rocket systems that helped the Azerbaijani military outgun the Nagorno-Karabakh separatist forces in the latest fighting.

Armenian officials say Turkey is involved in the conflict and is sending Syrian mercenaries to fight on Azerbaijan’s side. Turkey has denied deploying combatants to the region, but a Syrian war monitor and three Syria-based opposition activists have confirmed that Turkey has sent hundreds of Syrian opposition fighters to fight in Nagorno-Karabakh. 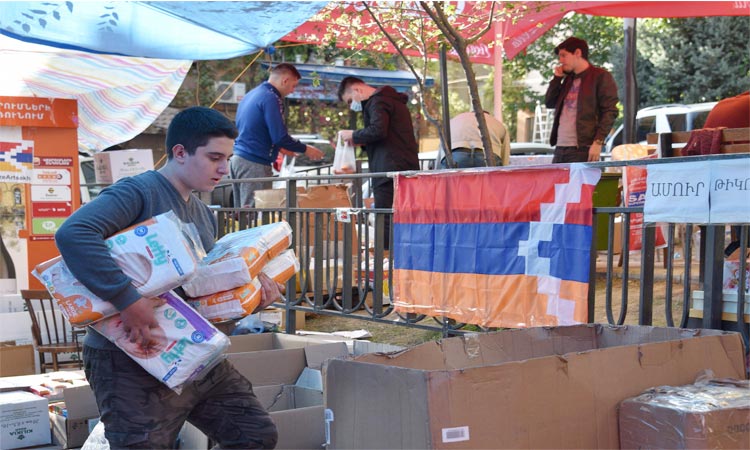 Volunteers pack food and other stuff in boxes to be sent as aid in Yerevan. AFP

In an interview with CNN Arabic aired on Thursday, Azerbaijan’s president admitted that Turkish F-16 fighter jets have stayed on in Azerbaijan weeks after a joint military exercise, but insisted that they have remained grounded. Armenian officials had earlier claimed that a Turkish F-16 shot down an Armenian warplane, a claim that both Turkey and Azerbaijan have denied.

Turkey’s involvement in the conflict raised painful memories in Armenia, where an estimated 1.5 million died in massacres, deportations and forced marches that began in 1915 as Ottoman officials worried that the Christian Armenians would side with Russia, its enemy in World War I.

The event is widely viewed by historians as genocide. Turkey denies the deaths constituted genocide, saying the toll has been inflated and that those killed were victims of civil war and unrest.

Turkey’s high profile in the conflict worried Russia, which has a military base in Armenia. The two countries are linked by a security treaty obliging Moscow to offer support to its ally if it comes under aggression.

At the same time, Russia has sought to maintain strong economic and political ties with oil-rich Azerbaijan and ward off Turkey’s attempt to increase its influence in the South Caucasus without ruining its delicate relations with Ankara.

Putin and Turkish President Recep Tayyip Erdogan have negotiated a series of deals to coordinate their conflicting interests in Syria and Libya and expanded their economic ties. Last year, NATO member Turkey took the delivery of the Russian S-400 air defense missiles, a move that angered Washington.

A cease-fire in Nagorno-Karabakh would allow the Kremlin to stem Turkey’s bid to expand its clout in Russia’s backyard without ruining its strategic relationship with Ankara.

While Turkey has aspired to join the Minsk Group talks as a co-chair, the statement issued by Armenia and Azerbaijan contained their pledge to maintain the current format of the peace talks. 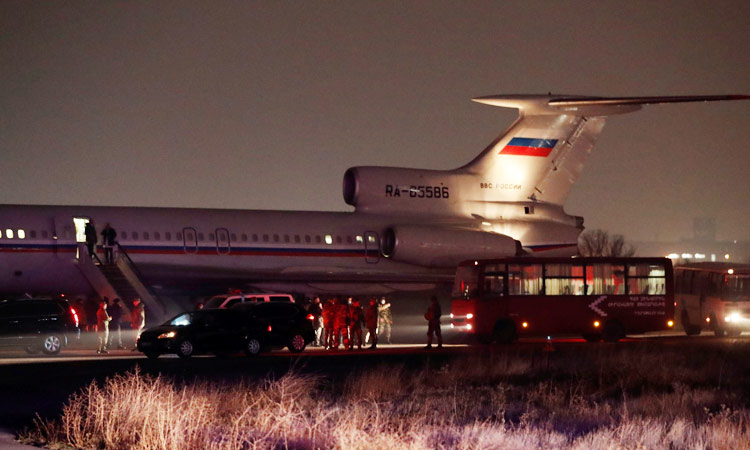