If Trump still has Covid, call off the debate: Biden - GulfToday 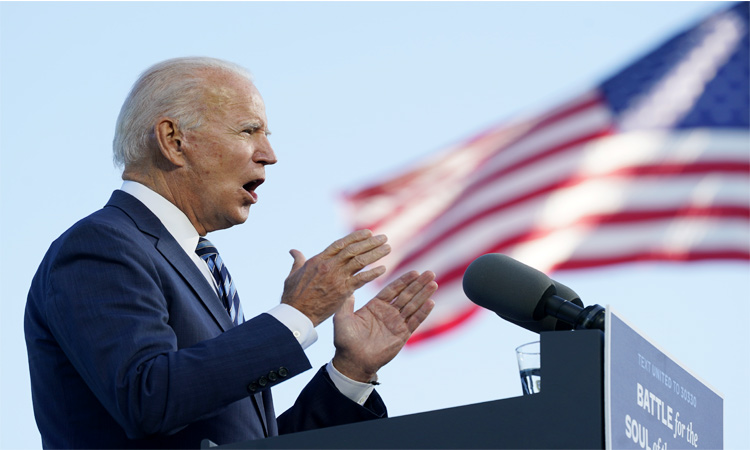 Democratic presidential candidate Joe Biden said on Tuesday that next week’s scheduled debate with Republican President Donald Trump should not take place if Trump is still infected with COVID-19.

Biden said the Oct. 15 debate in Miami should only be staged under strict health guidelines and called the coronavirus outbreak that has hit Trump and a wave of other White House officials “a very serious problem.”

“If he still has COVID, we shouldn’t have a debate,” Biden told reporters after a campaign stop in Pennsylvania. 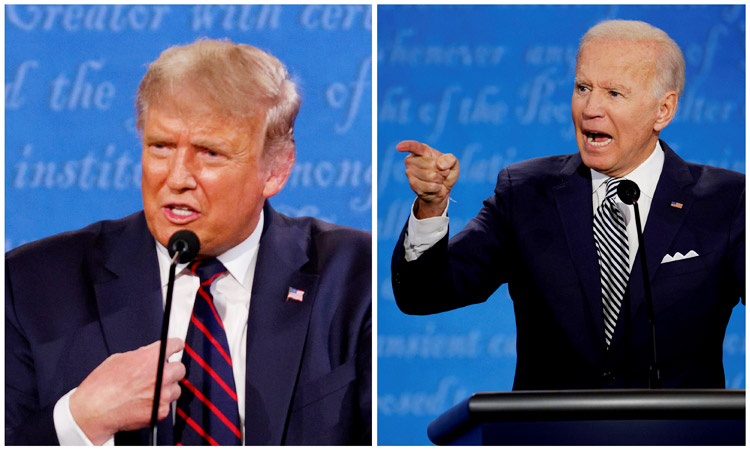 Trump and Biden are seen during the first 2020 presidential campaign debate.

“I’m not sure what President Trump is all about now. I don’t know what his status is. I’m looking forward to being able to debate him, but I just hope all the protocols are followed,” Biden said.

Asked about Biden’s comments, Trump campaign spokesman Tim Murtaugh said: “President Trump will be healthy and will be there. There’s no getting out of this one for Biden, and his protectors in the media can’t cover for him.”

After days of conflicting messages from doctors and aides about his condition, Trump, 74, returned to the White House on Monday after three nights at a hospital. His doctor said on Tuesday that Trump reported no COVID-19 symptoms and was doing “extremely well.”

The normal quarantine period for anyone testing positive for the novel coronavirus is 14 days. Trump announced his positive test on Friday.

“Too many people have been infected. It’s a very serious problem, so I will be guided by the guidelines of the Cleveland Clinic and what the docs say is the right thing to do,” Biden said of his debate participation.

US presidential debate, a sorry spectacle

The 2020 Trump-Biden election hinges on character

The former vice president, 77, tested negative again for COVID-19 on Tuesday, a week after sharing a debate stage with Trump in Cleveland.

The US Centers for Disease Control and Prevention said it was safe for Pence to take part in the debate because he was not in close contact with anyone with COVID-19, including Trump.

Earlier on Tuesday, Biden gave a speech in Gettysburg, Pennsylvania, the site of one of the bloodiest battles of the US Civil War. He said that as president he would put politics aside and try to heal the country’s widening racial, political and economic divisions.

Biden did not invoke the name of Trump but said the country was experiencing “total unrelenting partisan warfare” that had made it hard to tackle the coronavirus that has killed 210,000 people in the United States and cost millions more their jobs.

“Let’s set the partisanship aside. Let’s end the politics. Let’s follow the science. Wearing a mask isn’t a political statement. It’s a scientific recommendation,” Biden said, alluding to Trump’s repeated refusal to wear a mask for safety even after he contracted the virus.

“What we need in America is leadership that seeks to de-escalate tensions, to open lines of communication, and to bring us together,” he said. “As president, that is precisely what I will do.”

Biden picked a dramatic spot for the speech, delivering it near the Gettysburg battlefield where the Union army pushed back Confederate soldiers in 1863, a turning point in the Civil War.

It was also where President Abraham Lincoln delivered his historic Gettysburg Address, citing the US Declaration of Independence that proclaimed all people are created equal, a speech Biden made reference to repeatedly.

National opinion polls show Biden with a consistent lead on Trump ahead of the Nov. 3 Election Day, although the lead has been narrower in some crucial battleground states.

In Pennsylvania, which Trump narrowly won over Democrat Hillary Clinton in 2016, a Reuters/Ipsos poll taken Sept. 29 to Oct. 5 showed Biden with a 5-point lead on Trump, matching the poll’s credibility interval. 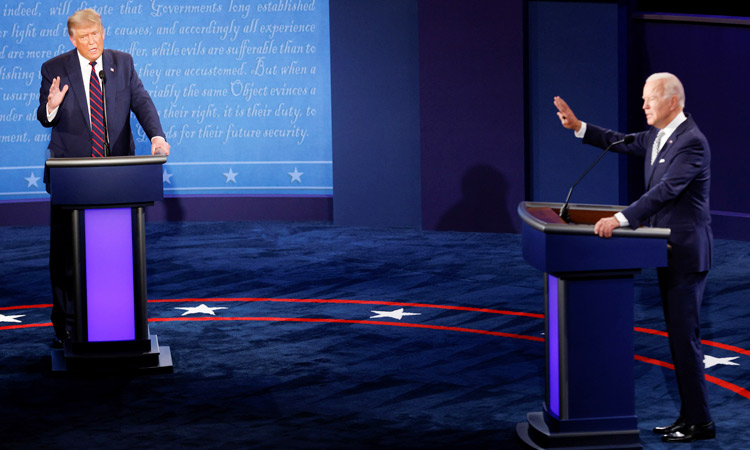 Joe Biden and Donald Trump exchanged heated barbs on Tuesday, attacking each other’s competence and credibility, in a fiery first presidential debate 35 days ahead of the most tense US election in recent memory.