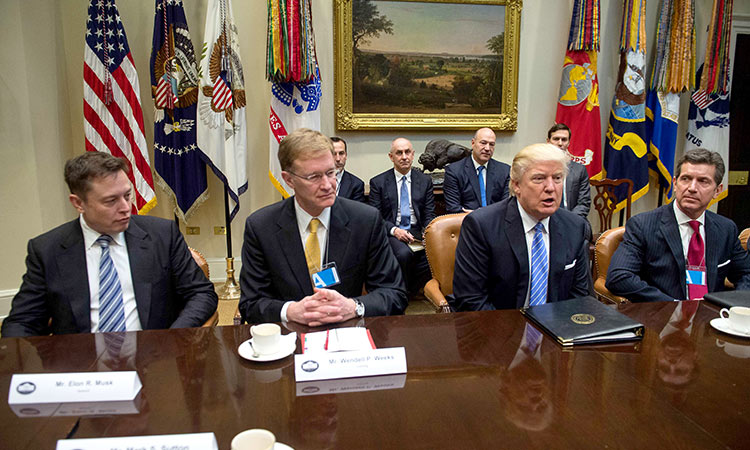 US President Donald Trump meets with business leaders in the Roosevelt Room at the White House. AFP

With just five weeks to go until the US presidential election, Elon Musk is still an undecided voter.

The Tesla and SpaceX CEO offered up a cagey answer when asked if he would be voting for Donald Trump.

When the host asked Musk why the debates — the first of which is slated for Tuesday — will be the determining factor for his vote, he answered, "I think that's probably the thing that will decide things for America. I think people just want to see if Biden's got it together. … If he does, he probably wins."

Musk went on to describe his political views as "socially very liberal and then economically right of centre, maybe, or center? I don't know. Obviously I'm not a communist".

When it comes to Tesla and electric cars, Mr Trump has been "as supportive as he can be", Musk claimed, given the massive support he has from the oil and gas industries. 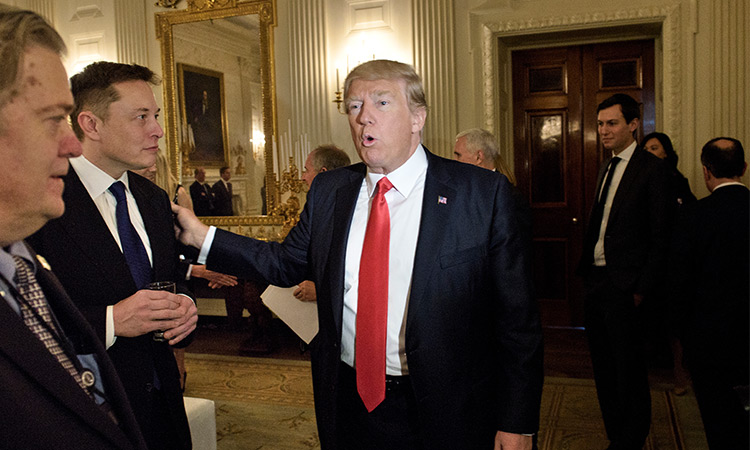 Donald Trump greets Elon Musk before a policy and strategy forum with executives in the White House.

"I have spoken to the president about sustainable energy many times," Musk said. "There are times when he's been supportive, but then, at the end of the day, he has got way more support from the oil and gas industry because it's way bigger. The electric car industry is small."

Musk's comments may come as a surprise, considering he's long championed sustainable energy and fighting climate change, neither of which have been priorities for the Trump administration. In 2017, he gave up his seat on Trump's advisory council after the president decided to pull out of the Paris Climate Agreement.

However, the president and the billionaire entrepreneur have recently appeared to be on good terms again. Earlier this year, Trump attended the SpaceX and NASA astronaut launch in Florida, and he publicly defended Musk's calls to resume production at Tesla's California plant amid the coronavirus pandemic.

Back in 2016, Musk didn't publicly support Trump's presidential campaign. In fact, the Tesla boss said at the time that Trump was "probably not the right guy" to lead the country because he "doesn't seem to have the sort of character that reflects well on the United States." Musk did, however, previously back others for the 2020 presidential race, including Andrew Yang and Kanye West.