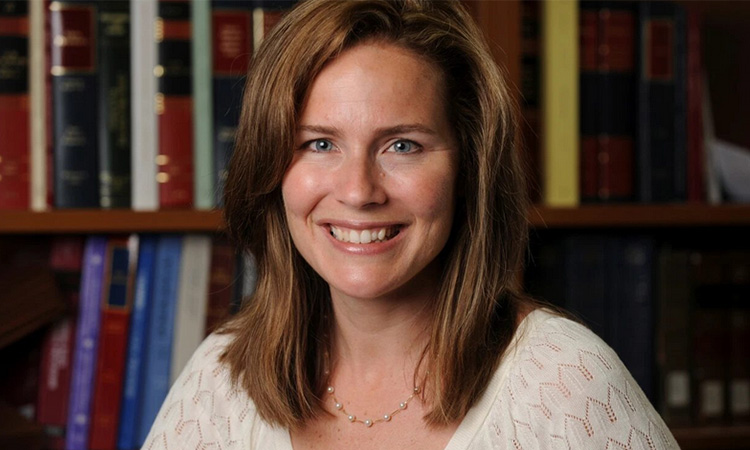 According to informed sources, Trump will make the official announcement in the White House Rose Garden on Saturday evening, The Hill news website reported.

A Politico news report citing sources said that Barrett, 48, is expected to appear alongside the President during the announcement.

If confirmed, she will join Trump's two other appointments, Neil Gorsuch and Brett Kavanaugh, to form a 6-3 conservative majority.

She was previously considered as a potential nominee to replace Anthony Kennedy in 2018, but Trump ultimately chose to nominate Kavanaugh to fill that vacancy.

As he returned to Washington on Friday night, Trump told reporters that he had made decision.

"In my own mind, yes," Politico quoted the President as saying.

But when asked about Barrett, he added: "I haven't said it was her but she is outstanding."

The Hill news report said that Trump was very pleased with Barrett's performance during a meeting at the White House on Monday.

The report said that she was the favourite choice of conservative Christians who hope to overturn the landmark decision in Roe v. Wade establishing a woman's right to an abortion.

Meanwhile, the White House has already started to reach out to Ssenators to set up meetings with the nominee, Politico reported.

The Senate Judiciary Committee expects to hold confirmation hearings the week of October 12.

Both Trump and some Republican senators have said the Supreme Court needs to have all nine justices ahead of the election, in case the court needs to step in to decide the result.

The Democrats have still maintained that a nominee should be tapped by the next President following the November 3 election.

Democratic presidential nominee Joe Biden said the move to pick a new Justice before the election was an "abuse of power".

Two Republican Senators, Lisa Murkowski of Alaska and Susan Collins of Maine, have also opposed voting on a nominee before the election.