On Friday, lawmakers, along with the feminist icon's family and friends, made signs of the cross, bowed their heads and placed their hands over their hearts in front of the flag-draped casket in the Capitol's Statuary Hall, reports The Hill news website.

After she died on September 18 due to pancreatic cancer, Ginsburg also became the first Jewish person and only the second Supreme Court Justice to lie in state at the Capitol's catafalque built in 1865 for when President Lincoln laid in state. 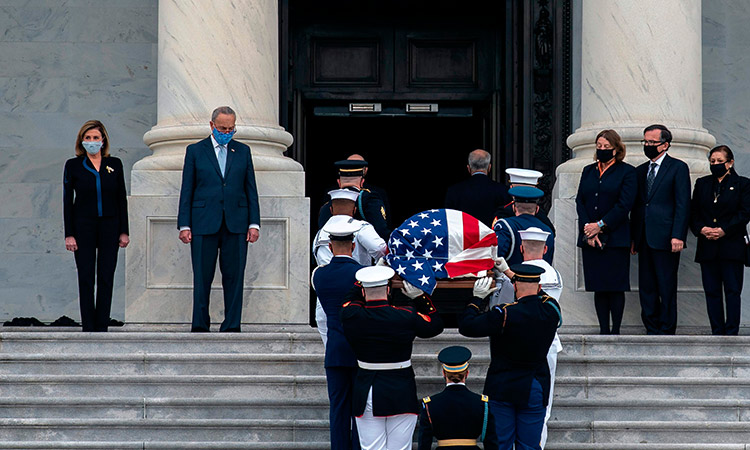 The flag-draped casket of Ginsburg carried by a joint services military guard walks up the steps of the U.S.Capitol. AFP

As a public official, Ginsburg is the first woman to lie in state.

The only other Supreme Court Justice to do the same was William Howard Taft, who also served as President, in 1930.

On Wednesday and Thursday, Ginsburg's casket was placed under the portico at the top of the front steps of the Supreme Court building.

Opening Friday's ceremony, House Speaker Nancy Pelosi said: "It is with profound sorrow and deep sympathy to the Ginsburg family that I have the high honour to welcome Justice Ruth Bader Ginsburg to lie in state in the Capitol of the US. 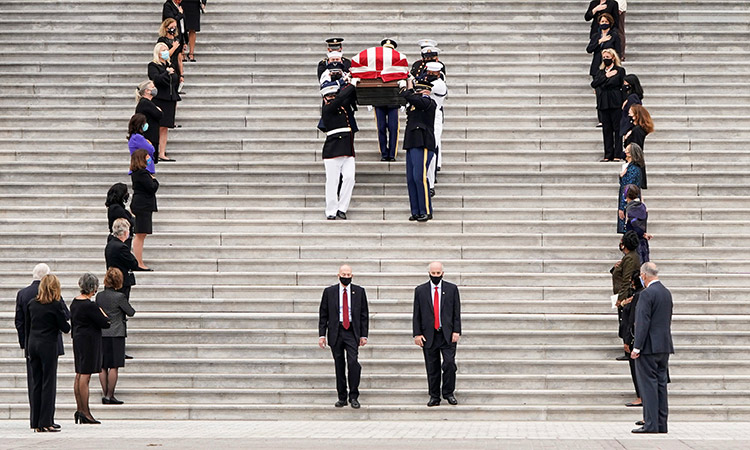 U.S. Congresswomen line the steps and look on as the flag-draped casket of Justice Ruth Bader. AP

"She does so on the catafalque built for Abraham Lincoln. May she rest in peace."

Harris, the third female vice presidential nominee on a major party ticket, said later that Ginsburg "absolutely" cleared the path for her career.

Ginsburg's family plans to hold a private burial next week at Arlington National Cemetery, according to the Supreme Court.