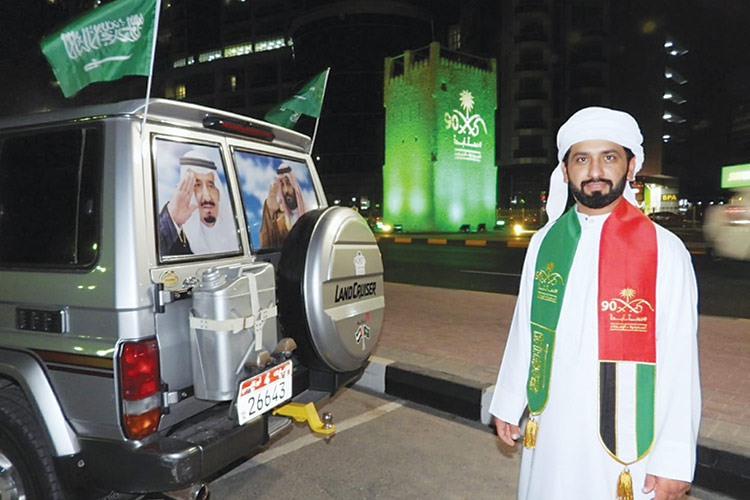 Rashid Aziz Al Shehi decorated his own vehicle with pictures of the Saudi leaders, symbols and flag.

Made under the slogan ‘An Emirati is Saudi and a Saudi is Emirati’, the trip started from the western region, specifically Al Dhafra Region. The traveller then moved to Abu Dhabi, Dubai, Sharjah, Ajman and Umm Al Quwain before landing in Ras Al Khaimah. He then proceeded to Khor Fakkan and Fujairah before finally arriving in Ajman Corniche again, where the ‘Al Murabaa Watchtower’ was adorned with the slogan ‘Together Forever’.

An Emirati social media activist, Al Shehhi said he had been searching for an idea and a special initiative to celebrate Saudi Arabia’s National Day for the trip to constitute a message of love, appreciation, and support for the kingdom and its leadership, government and people. The trip represents a sincere and transparent image that reflects the depth of the current historical relations between the UAE and Saudi Arabia.

Earlier, Abdulla Bin Touq Al Marri, UAE Minister of Economy, stressed that the ties between the UAE and the Kingdom of saudi Arabia, KSA, represent a unique and exceptional model of bilateral relations.

“The UAE and KSA are the pillars of stability and development in the Gulf and Arab region, and our relations with our brothers in the kingdom continue to flourish, under the guidance of President His Highness Sheikh Khalifa Bin Zayed Al Nahyan, and his brother, Custodian of the Two Holy Mosques, King Salman Bin Abdulaziz Al Saud, King of the Kingdom of Saudi Arabia. The celebration of the Saudi National Day by the UAE, its leadership and people, under the theme “UAE KSA Together” reflects the shared feelings of patriotism and sincere love between the two brotherly countries and peoples,” he said, congratulating KSA and its people on the occasion of the 90th Saudi National Day.

“We are confident that the next phase will involve more projects, initiatives, and cooperation efforts that serve the comprehensive development of both countries, in line with a clear vision and integrated plans laid out by the Saudi-Emirati Coordination Council, and with the unlimited support from the wise leadership of both countries,” Bin Touq added.

Dr. Ahmad Belhoul Al Falasi, Minister of State for Entrepreneurship and SMEs, and minister in charge of the tourism file, said, “The strength of the strategic partnership and integration between the UAE and KSA at all levels, based on the bonds of brotherhood, cultural heritage and a shared destiny, and supported by the unity of positions and consistent orientations towards global and regional issues are exemplary.”

“The UAE’s leadership and its people join our brothers in the KSA in celebrating the 90th Saudi National Day, which is a message of love and pride in our partnership. (Together_Forever) towards more prosperity and sustainable growth,” he added.

Dr. Thani Bin Ahmed Al Zeyoudi, Minister of State for Foreign Trade, said, “The two countries are linked by many common denominators in their vision and development strategies, especially the UAE Vision 2021, the Fifty-Year Charter, and the UAE Centennial 2071 for long-term development on the one hand, and the Saudi Vision 2030 on the other hand, It opens broader horizons for the development of the partnership between the two countries, at the governmental and private levels.”

Meanwhile, Etihad Airways, the national airline of the United Arab Emirates, congratulated the leadership and people of the Kingdom of Saudi Arabia on the 90th National Day of the Kingdom.

To mark the occasion, the airline created an infographic to showcase the flight path of the special liveried “Choose Saudi Arabia” Boeing 787-9 Dreamliner since its first flight to Riyadh on 23rd September 2019.