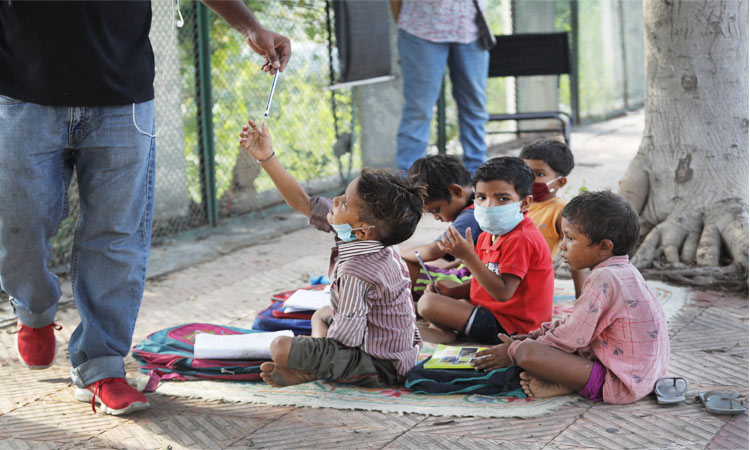 A child takes a pencil during a class conducted by Veena Gupta on a sidewalk in New Delhi.

The children, ages 4 to 14, carry book bags more than 2 kilometres (a mile) from their thatched-roof huts on the banks of the Yamuna River to this impromptu, roadside classroom. There, they receive free lessons in math, science, English and physical education, taught by a former Indian diplomat and his wife.

It all began when Veena Gupta’s maid, who lives on bank of the river, complained that with schools shut, children in her impoverished community were running amok and wasting time. 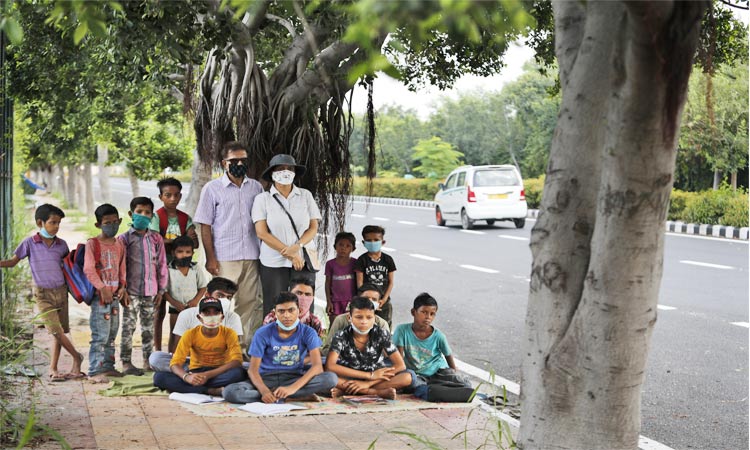 Virendra Gupta and his wife Veena Gupta pose for a photograph with underprivileged children on a sidewalk in New Delhi.

“If they stayed at home doing nothing, they’d become drifters,” said Dolly Sharma, who works at Veena’s high-rise apartment, which overlooks the lush riverbank.

Veena, a singer and grandmother of three, and her husband, Virendra Gupta, decided to go out to the street and teach the kids so they are not left behind when school reopens.

“They don’t have access to internet, their schools are shut and they don’t have any means to learn,” said Veena, who bought books, pencils, notebooks and other teaching materials, and set up the small, open-air classroom under the shade of a leafy banyan tree.

India’s stringent lockdown to curb the spread of COVID-19 shut schools across the country in late March. Most remain closed as the number of cases has surged past 5 million, making India second worst-hit in the world after the United States. 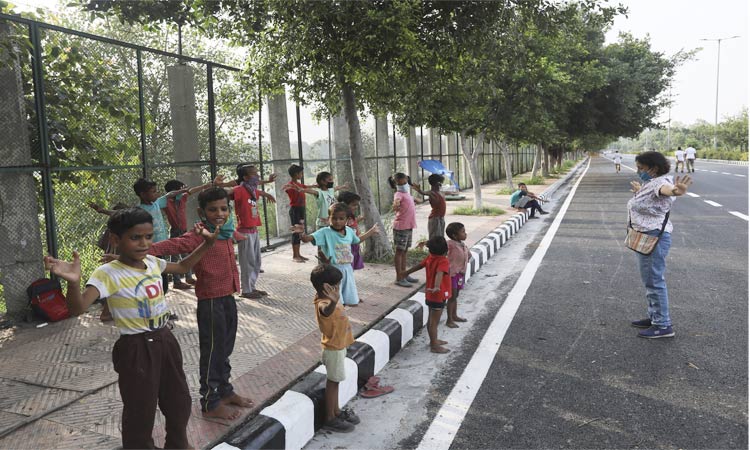 “There is only one mobile phone in my family and it is usually with my father. I can’t study online,” said Nitin Mishra, a ninth grader in Virendra’s math class. Mishra’s mother works as a part-time maid and his father is unable to find employment as India’s economy has been hit hard by the pandemic.

The street-side classes have grown as dozens of children showed keen interest. Now the Guptas - with help from their driver, Heera - teach three different groups three times a week, morning and evening. 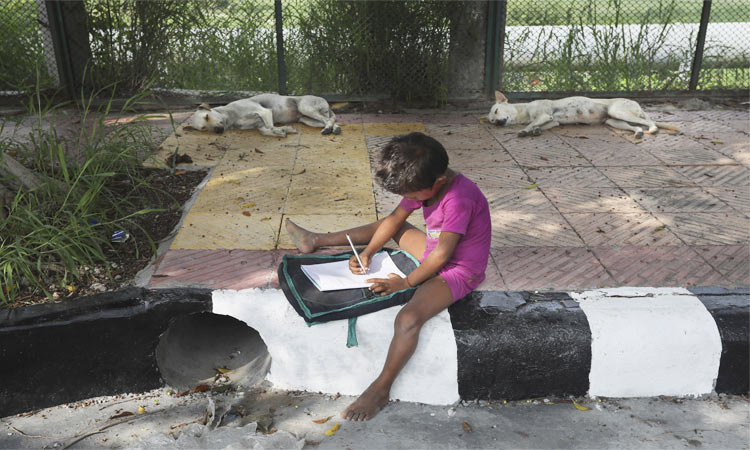 A child practices writing during a sidewalk class taught by an Indian couple in New Delhi.

After class, the children are treated to homemade lemonade and cookies prepared by Veena.

The Guptas say teaching the kids makes them feel closer to their grandchildren, who live abroad.

“My father would make me spend my summer vacation learning the next year’s curriculum in advance,” said Virendra, who served as Indian ambassador to several countries including South Africa. 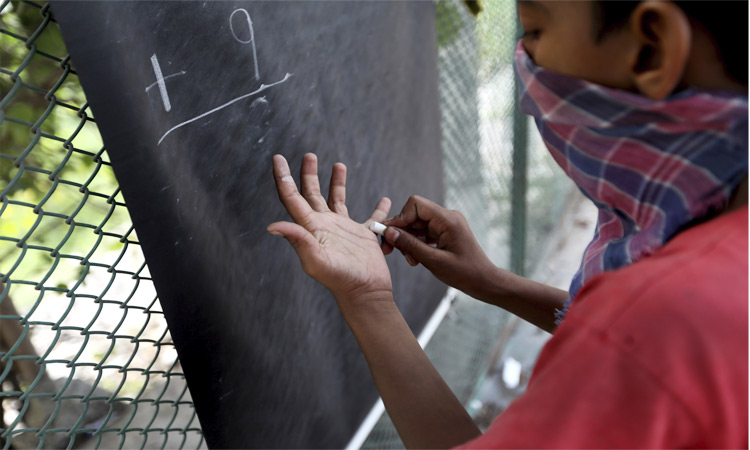 A boy learns addition on a sidewalk class taught by an Indian couple in New Delhi.

“That really boosted my confidence and made me interested in schoolwork. And that is what I am trying to do with these children, so when their school reopens, they are slightly ahead of their class.”

Veena said she hopes to recruit more volunteers to teach the street-side classes.

“It is not about the money that people can contribute and give, it is about their time,” she said. “They should take out little bit of their time, an hour or so, if not every day, every alternate day, and come and help these children.” 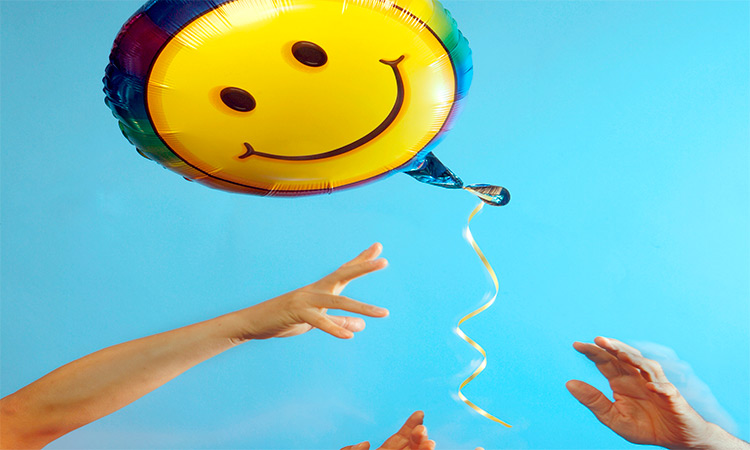 The Era Medical College on Hardoi Road is the first higher education institution in the state to boast of having a department of happiness. 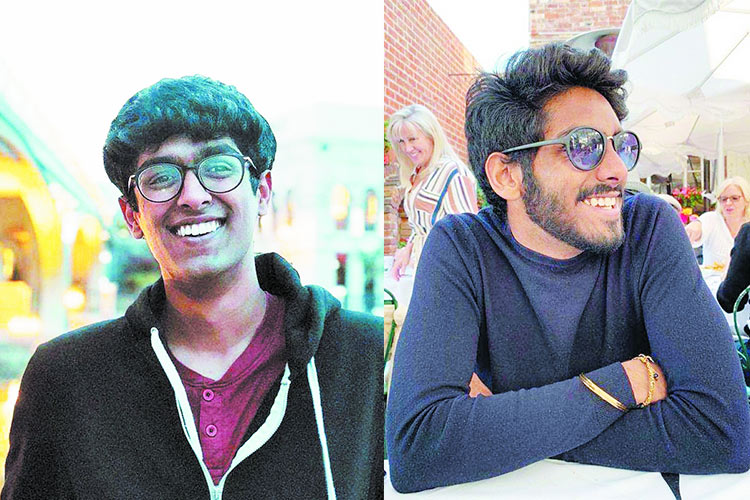 The deceased were identified as Sharat Kumar and Rohit Krishnakumar.