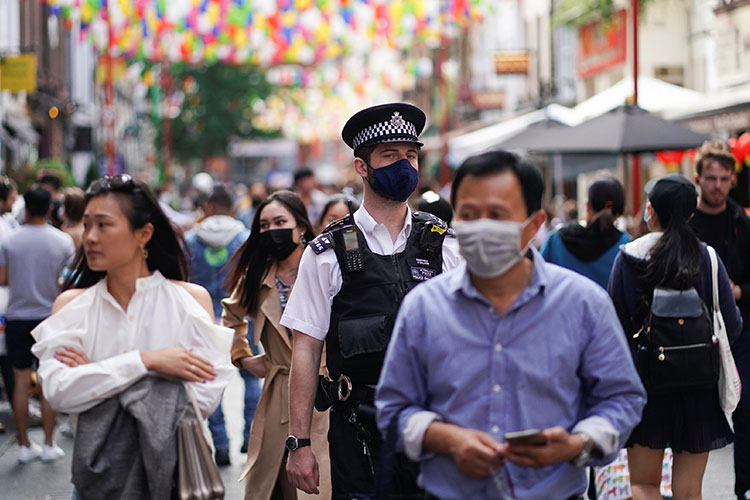 People walk through the Chinatown area, amid the coronavirus disease outbreak in London. Reuters

LONDON: Britain’s government will fine people who refuse an order to self-isolate up to £10,000 ($13,000) as the country sees a sharp surge in coronavirus infections.

The new rule obliges people to self-isolate if they test positive for the coronavirus or are traced as a close contact. The rule comes into effect on Sept. 28.

The government will help those on lower incomes who face a loss of earnings as a result of self-isolating with a one-time support payment of £500 ($633).

The latest figures show that new daily coronavirus cases for Britain have risen to 4,422, the highest since early May. An official estimate also shows that new infections and hospital admissions are doubling every seven to eight days in the UK.

The Conservative government is widely expected to impose further restrictions after Prime Minister Boris Johnson confirmed that Britain is seeing a second wave of infections, following the trend elsewhere in Europe. London's mayor has also said tighter restrictions could be needed soon in the British capital.

Britain reported 3,899 new cases of COIVD-19 on Sunday, compared to 4,422 on Saturday, the government reported on its website.

Overall, the number of cases has risen sharply in recent weeks, prompting tighter restrictions across the country and several local lockdowns.

Britain is at a tipping point on COVID-19, health minister Matt Hancock said on Sunday, warning that a second national lockdown could be imposed if people don't follow government rules designed to stop the spread of the virus.

COVID-19 cases have risen sharply in recent weeks, with 3,899 reported on Sunday.

Johnson has called it a second wave and stricter lockdown measures have been introduced in areas across the country - with London possibly next in line.

"The nation faces a tipping point and we have a choice," Hancock told Sky News.

"The choice is either that everybody follows the rules ... or we will have to take more measures."

Hancock later told the BBC that a second national lockdown was possible option.