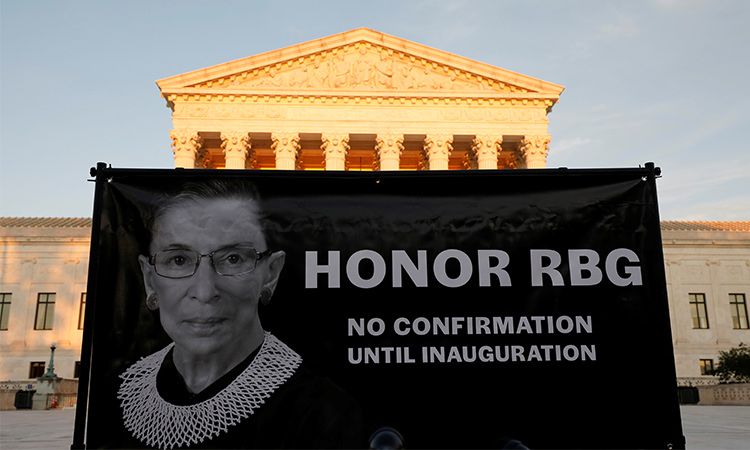 A banner with an image of the late Justice Ruth Bader Ginsburg displayed outside the U.S. Supreme Court in Washington.

President Donald Trump said on Saturday he will nominate a woman to sit on the U.S. Supreme Court, a move that could tip the court further to the right following the death of liberal Ruth Bader Ginsburg.

"I will be putting forth a nominee next week. It will be a woman," Trump said at a campaign rally in Fayetteville, North Carolina that stretched for over 90 minutes. "I think it should be a woman because I actually like women much more than men."

He praised Ginsburg as a "legal giant... Her landmark rulings, fierce devotion to justice and her courageous battle against cancer inspire all Americans."

Earlier, he praised two women as possible choices for the U.S. Supreme Court: conservatives he elevated to federal appeals courts. 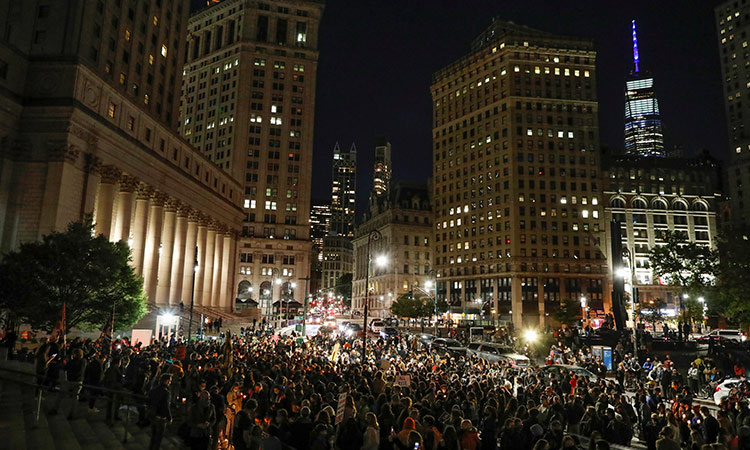 People gather for a vigil outside of the New York State Civil Supreme Court building held for Ruth Bader.

Trump named Amy Coney Barrett of the Chicago-based 7th Circuit and Barbara Lagoa of the Atlanta-based 11th Circuit as possible nominees for a lifetime appointment to the highest U.S. court. It would be his third appointment during his first term.

Trump said it was his constitutional right to appoint a successor for Ginsburg, and he would do so, citing similar moves by presidents dating back to George Washington. "We have plenty of time. You’re talking about Jan. 20," Trump said, referring to the date of the next inauguration.

Ginsburg's death on Friday from cancer after 27 years on the court handed Trump, who is seeking re-election on Nov. 3, the opportunity to expand its conservative majority to 6-3 at a time of a gaping political divide in America.

Any nomination would require approval by a simple majority in the Senate, where Trump's Republicans hold a 53-47 majority.

Not all Republican senators supported the move: Maine's Susan Collins on Saturday said a nomination should wait. 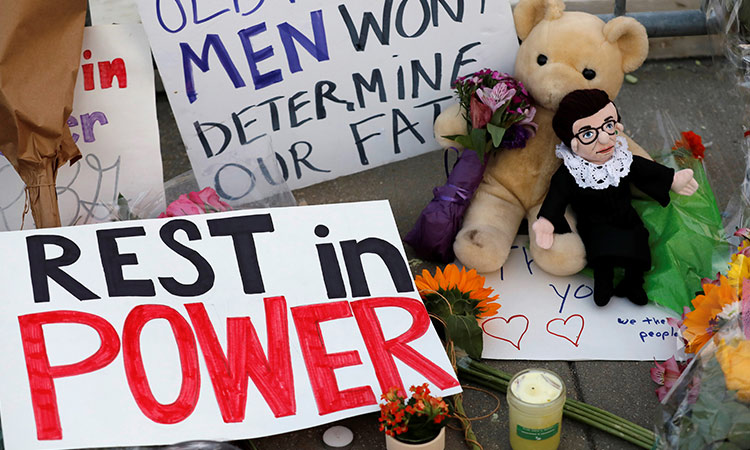 "In fairness to the American people, who will either be re-electing the President or selecting a new one, the decision on a lifetime appointment to the Supreme Court should be made by the President who is elected on November 3rd," Collins, facing a tough re-election race herself, said in a statement.

At the time, Senate Majority Leader Mitch McConnell said the Senate should not act on a nominee during an election year, but he and other top Republican senators have reversed that stance. 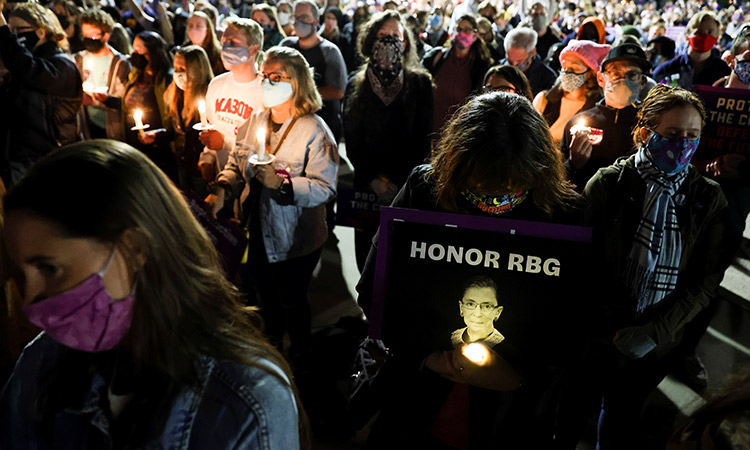 Even if Democrats win the White House and a Senate majority in the November election, Trump and McConnell might be able to push through their choice before the new president and Congress are sworn in on Jan. 20.

Senior congressional Democrats raised the prospect of adding more justices next year to counterbalance Trump's nominees if they win control of the White House and Senate.

"Let me be clear: if Leader McConnell and Senate Republicans move forward with this, then nothing is off the table for next year," Senate Minority Leader Chuck Schumer told fellow Democrats on a Saturday conference call, according to a source who listened to the call.

McConnell, who has made confirmation of Trump's federal judicial nominees a priority, said the chamber would vote on any Trump nominee. Democrats, with few tools to block passage of a nominee, plan to try to rally public opposition.

"The focus needs to be showing the public what's at stake in this fight. And what's at stake is really people's access to affordable healthcare, workers' rights and women's rights," said Democratic Senator Chris Van Hollen in a telephone interview.

Obama on Saturday called on Senate Republicans to honor what he called McConnell's "invented" 2016 principle.

"A basic principle of the law - and of everyday fairness - is that we apply rules with consistency, and not based on what’s convenient or advantageous in the moment," Obama said in a statement posted online. 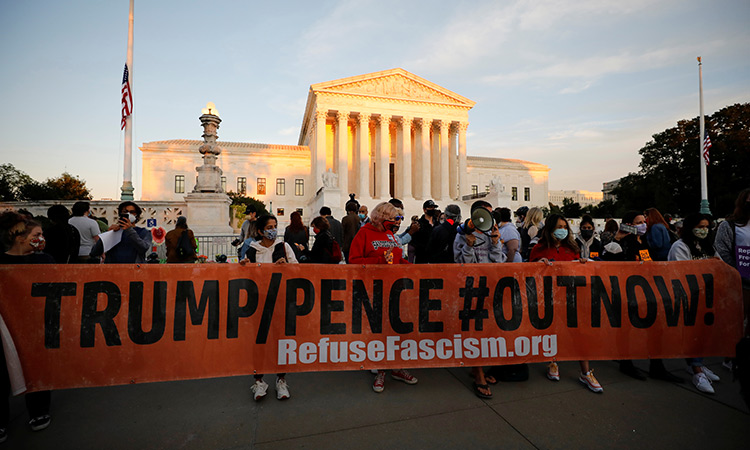 People hold a banner outside the U.S. Supreme Court.

Even before Ginsburg's death, Trump had released a list of potential nominees.

Barrett has generated perhaps the most interest in conservative circles. A devout Roman Catholic, she was a legal scholar at Notre Dame Law School in Indiana before Trump appointed her to the 7th Circuit in 2017. Abortion-rights groups have pointed to Barrett's conservative religious views and said that as a judge, she would likely vote to overturn the landmark 1973 Roe v. Wade Supreme Court decision that legalized abortion nationwide.

Lagoa has served on the 11th U.S. Circuit Court of Appeals for less than a year after Trump appointed her and the Senate confirmed her in an 80-15 vote. Prior to that, she spent less than a year in her previous position as the first Latina on the Florida Supreme Court, after more than a decade as a judge on an intermediate appeals court.

During the 2016 campaign, Trump promised to appoint justices who would overturn Roe v. Wade, a longtime goal of conservative activists. Even with the current conservative majority, the court voted 5-4 in July to strike down a restrictive Louisiana abortion law.

Cristine Crispell, who works in special education in Reedsville, Georgia, drove five hours to attend the rally with her two teenage daughters. She said Trump "absolutely" had the right to nominate a new justice, even so close to the election.

"I would like to see Roe v. Wade overturned. Absolutely," she said. "Sanctity of life is a huge thing."

Trump has already appointed two justices: Neil Gorsuch in 2017 and Brett Kavanaugh in 2018. Kavanaugh was narrowly confirmed after a heated confirmation process in which he angrily denied accusations by a California university professor, Christine Blasey Ford, that he had sexually assaulted her in 1982 when the two were high school students in Maryland.

House of Representatives Judiciary Committee Chairman Jerrold Nadler on Saturday said that rushing a court pick through if Democrats win in November would be "undemocratic."

He said on Twitter: "Congress would have to act and expanding the court would be the right place to start."

Senator Lisa Murkowski of Alaska, a Republican who is not up for re-election this cycle, told local media on Friday, prior to Ginsburg's death, that she would not vote for a Supreme Court nominee so close to the election.