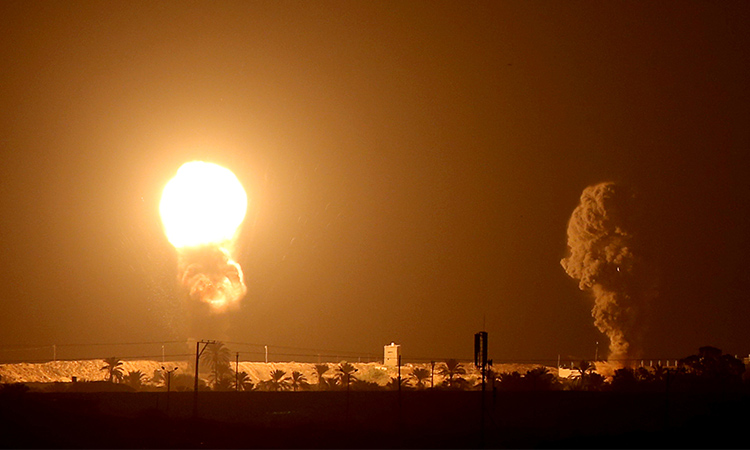 Smoke and flame are seen following an Israeli air strike in the southern Gaza Strip.

Israel bombed Gaza on Wednesday morning after rocket fire from the territory.

At least two rockets were fired from the Gaza Strip the previous evening, one of which was intercepted by Israel's Iron Dome anti-missile system.

The other crashed into the southern coastal city of Ashdod, lightly wounding at least two people, emergency services said.

The Israel Defence Forces said their fighter jets responded with air strikes on military targets belonging to Hamas, which controls the Gaza Strip.

There was no immediate claim of responsibility for the rocket fire from the various Palestinian factions operating in Gaza.

But the IDF levelled blame at Hamas and warned that it would "bear the consequences for terror activity against Israeli civilians".

Clutching Palestinian flags and wearing blue face masks for protection against coronavirus, demonstrators rallied in the West Bank cities of Nablus and Hebron and in Gaza. 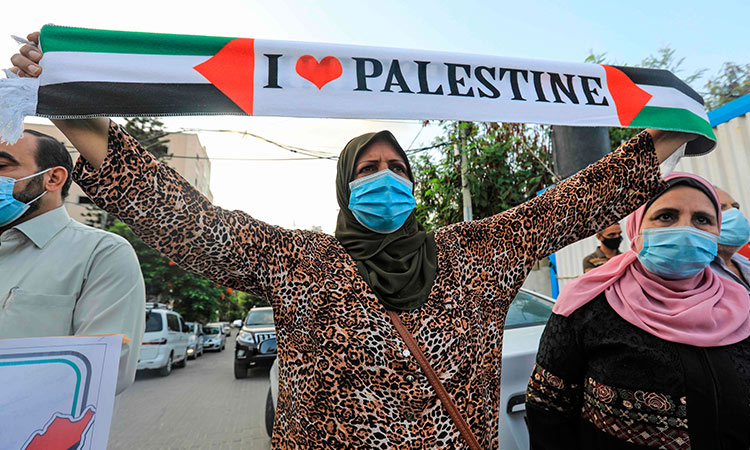 A woman wears a face mask during a protest in Gaza.

Hundreds also took part in a demonstration in Ramallah, home of the Palestinian Authority (PA).

Palestinian president Mahmud Abbas warned that the deals would "not achieve peace in the region" until the US and Israel acknowledged his people's right to a state.

"Peace, security and stability will not be achieved in the region until the Israeli occupation ends," he said.

Abbas warned that "attempts to bypass the Palestinian people and its leadership, represented by the Palestine Liberation Organisation, will have dangerous consequences".

That latest rocket fire came after a month in which militants in the strip had stepped up incendiary balloon attacks against Israel, which responded with nighttime air strikes against Hamas.