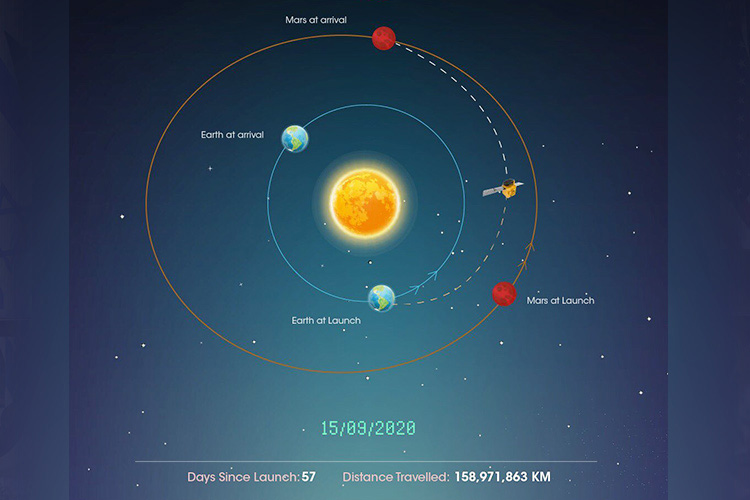 An artistic illustration of the Hope Probe on its route to Mars.

The Hope Probe has so far covered nearly one-third of the total distance in its historical journey to the Red Planet, since it was launched to Mars around two months ago. The probe is 321,520,536 kilometres away from Mars out of 493 million kilometres before it reaches its destination in the first quarter of 2021 concurrently with the UAE celebrations of its golden jubilee.

Earlier, His Highness Sheikh Mohammed Bin Rashid Al Maktoum, Vice President and Prime Minister of the UAE and Ruler of Dubai, posted the first photo sent by the Hope Probe from a distance of one million kilometres in space during its journey to Mars on 22 July. He tweeted on his personal account on Twitter saying: “The Hope Probe is officially 100 million km into its journey to the Red Planet, Mars, as demonstrated in the image captured by the probe’s Star Tracker.”

Bearing the slogan of ‘Noting is Impossible’, the probe was launched at exactly 1:58:14 UAE time on July 20 from the Tanegashima Space Centre in Japan.

The launch was postponed twice due to bad weather. At exactly 3:10am, UAE time, the first signal was received from the probe at the Mohammed Bin Rashid Space Centre  in Dubai, more than an hour after the launch of the probe, to begin the historic UAE mission to explore the Red Planet, as the first Arab space mission, and the ninth in the world.

The launch of the Hope Probe to explore Mars by the UAE was welcomed in public discourse across India with enthusiasm.

The Times of India created an infographic which was published in all its editions across India. It details the space mission’s objectives and recalls for readers Mars missions, past and present.

The Indian Express explained the latest Mars mission with a catchy standfirst: “UAE’s hope is on its way.”

The newspaper explained Hope Probe’s launch date thus: “The end of July 2020 offers a launch window during which Earth and Mars will be aligned at their closest points in two years, which means using less fuel to reach the planet. If a spacecraft is launched too early or too late, it will arrive in the planet’s orbit when the planet is not there.”