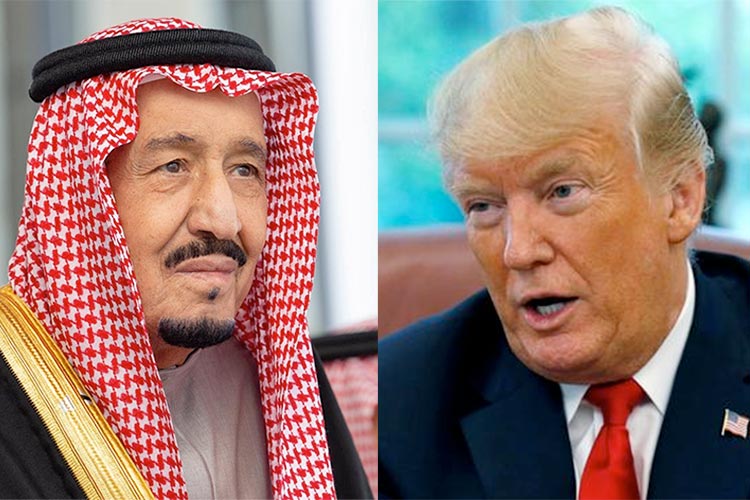 In a telephone call with US President Donald Trump, Saudi King Salman Bin Abdulaziz Al Saud affirmed the Kingdom’s keenness to reach a permanent and just solution to the Palestinian cause to bring peace, which he said is the main starting point for the Kingdom’s efforts and the Arab Peace Initiative, reported the Saudi Press Agency (SPA).

The leaders spoke by phone on Sunday about a number of issues of common concern including regional issues and the COVID-19 pandemic.

They discussed the work of the G20 chaired by the Kingdom of Saudi Arabia this year and the efforts made within its meetings to protect lives and livelihoods to mitigate the effects of COVID-19 pandemic.

They also reviewed the most prominent policies that have been agreed upon to reduce the negative aspects of the pandemic on peoples and the global economy.

The Custodian of the Two Holy Mosques affirmed that the Kingdom’s G20 presidency will continue to support and coordinate the group’s efforts to confront the effects of COVID-19 on the human and economic levels. On the situation in the region, the Custodian of the Two Holy Mosques also expressed the Kingdom’s appreciation for the efforts made by the United States of America to establish peace, added SPA.

The number of novel coronavirus cases in Gaza Strip have risen tenfold over the past two weeks, bringing the total to over 1,000, Palestinian officials said Monday.

In the past 24 hours, 182 infections were registered in the coastal enclave, bringing the number of cases to 1,151, including eight deaths, the Palestinian Authority health ministry said.

The crowded and impoverished Gaza Strip had maintained low infection rates since the start of the pandemic, as it remained isolated from much of the world.

Separately, the Arab Coalition Forces to Restore Legitimacy in Yemen intercepted and destroyed an explosive-laden drone early Monday launched by the Iranian backed Houthi militia towards the Kingdom of Saudi Arabia, reported SPA.

Meanwhile, in an unrealted development a Saudi Arabian court on Monday jailed eight people for between seven and 20 years for the 2018 murder of Saudi journalist Jamal Khashoggi, state media reported.

None of the defendants were named.

At an earlier stage of the trial in December, the court sentenced five people to death and three to jail saying then that the killing was not premeditated, but carried out “at the spur of the moment.”

US President Donald Trump says 200,000 coronavirus deaths in America is ‘doing it right’

Earlier, Trump – who faces a tough re-election fight and is trailing Democrat Joe Biden in the polls – said the 200,000 milestone was "a shame" and deflected blame onto China.