VIDEO: Emirati mother jumps into fire to save her son in Ras Al Khaimah - GulfToday One of the sons explains about the fire incident.

An Emirati mother in her sixties stormed into a house in order to save her son from a terrible fire in the Al-Arba`an neighbourhood  of Khatt, about 25 kilometres southeast of Ras Al Khaimah on Saturday night.

The distressed family told Gulf Today the story, explaining that the mother risked her life in order to save her two sons.

She jumped into the flames in the hope that she would get them out safely. Only one of them was in the house, the youngest of her children.

The trapped son, however, succeeded in leaving the burning house by jumping out of the window, before discovering that his mother had jumped into the fire to save him.

He returned to the room to pull out his mother, and sought the help of neighbours.

They succeeded in pulling her out of the house. The son survived the fire, while the other son had left home shortly before the fire broke out.

The burns covered almost 50% of her body.

The 22-year-old son suffered first-degree burns on the feet, arms and hands. 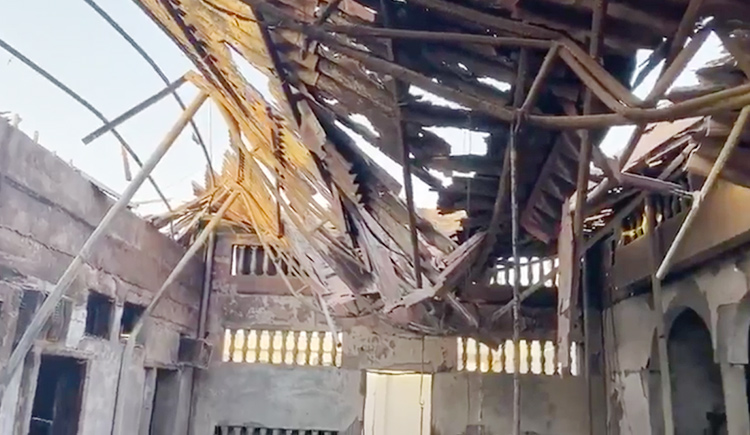 A view of the damaged house in Ras Al Khaimah.

The brother, who had left the house, returned after hearing about the fire accident, but fell on his arm and was injured.

After the incident, the mother and her son (Fahd Al Habsi) were transferred to Saqr Hospital in Ras Al Khaimah.

The mother was admitted to intensive care, and is still receiving treatment.

Al Khaleej newspaper visited the damaged home of the family, consisting of 13 children, who thanked God for the survival of the mother and son.

Saud Turki Ahmed Al-Habsi, the fifth son among the children, explained that his mother was in her room when the fire broke out in the house. She inhaled smoke while she was sleeping.

Noticing everything around her burning, she rushed to check on her children.

She left her room, but chose to break into the room where the fire broke out.

She was yelling, “My children ... my children", without knowing that her son had escaped by jumping from the window.

When asked why she did not escape, she responded, "I will die but I will not leave my children."

Saud said, “We got a modern house from the Sheikh Zayed Housing Program, but the mother refused to leave the old family home, where she got married and spent 44 years of her life."

Fahd Al-Habsi said, “He was stuck by the scene of fire in the corridor, to immediately look for a lifeline, which he found a window and jumped out of the house, before hearing the mother’s screaming, returned to rescue her.”

He found her unconscious in the burning house. Fahd sought help from the neighbours, who then took the mother out of the house.