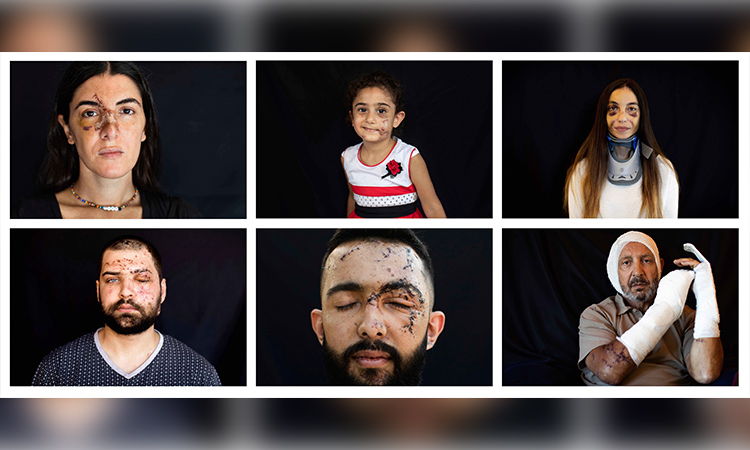 This combo of photos shows people who got injured during the Aug. 4 explosion that killed more than 170 people in Beirut.

The explosion in Beirut blew out windows for miles around and sent cascades of glass shards pouring onto the streets. It killed at least 180 people and left 6,000 wounded.

The scars often tell the story of where the victim was standing when a stockpile of explosive chemicals stored at Beirut's port was ignited by a fire, sending an earthquake-like jolt through the city and leaving entire blocks littered with rubble.

Shadi Rizk, a network engineer, was working in a glass building across from the port and saw the fire out his window. A haunting video he shot on his phone shows the column of spoke and his reflection in the glass window. His colleagues can be heard chanting "Oh my God” in the background.

Yara Saeid, 4, who got injured at her parents' apartment during the Aug. 4 explosion in Beirut.

Rainier Jreissati, 63, businessman, who got injured at his home during the tragic explosion in Beirut.

Hussein Haidar, 27, who got injured at his office during the Beirut blast on August 4.

Angelique Sabounjian, who was injured at her office during the Aug. 4 explosion in Beirut.

Clara Chammas, a psychologist and a health coach, who got injured at her apartment during the explosion in Beirut.

Shady Rizk, 32, network engineer, who got injured at his office during the Aug. 4 explosion in Beirut.

Tony Helou, 63, unemployed, who got injured at his apartment during the blast.

Hassan Nabha, 27, a computer and communication engineer, who got injured at his office.

Then there is a ball of fire and the screen turns to dust.

"I couldn’t see or hear anything at first, there was void,” he said. "Then, after 20 minutes, I think people heard our screams and someone came and took us to the hospital.”

He needed 350 stitches, dark tracks that criss-cross his arms, legs, chest and face.

"The scars that will remain on my face and body will tell my story," he said. "They are a sign that I’ve been deeply hurt and a sign that I have healed.”

VIDEO: A father, a sister, a son: Beirut blast takes a heavy a toll

There are other wounds that will take much longer to heal. The blast destroyed entire neighborhoods near the port, leaving tens of thousands of people unable to live in their homes or operate their businesses. Lebanon was already in the grip of a severe economic crisis and struggling to contain a coronavirus outbreak.

The trauma from the explosion will run deep, even in a city that has seen decades of war, conflict and instability.

Angelique Sabounjian, a fashion model, was left with a gaping wound above her right eye from flying glass, now replaced by stitches. She, like others, is now demanding an international investigation.

"It was a kind of a nuclear bomb," she said. "This was not something normal to happen.”