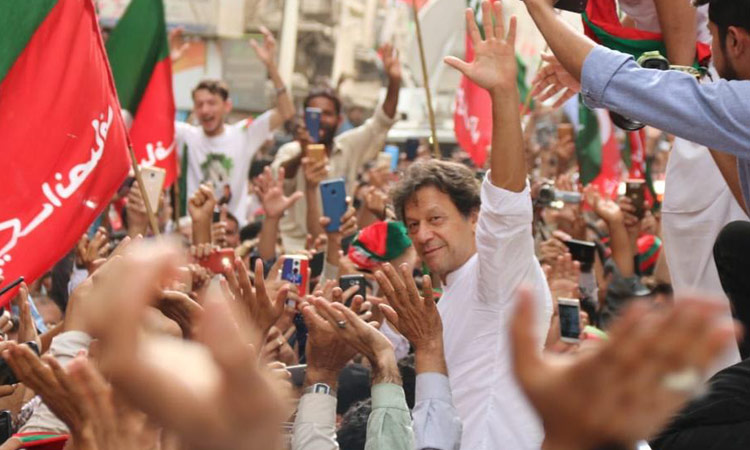 Imran Khan waves to his party workers during an election rally. File

Prime Minister Imran Khan says the last two years of his life were the toughest, despite having struggled all his life, as Pakistan was facing challenges from all fronts.

“My entire life has been a struggle,” he told Dunya TV channel. “Politics was the biggest struggle. But when you keep at it continuously, you learn how to do it. You no longer fear ups and downs. What happens is that when people don’t struggle for something, they become worried when there are ups and downs.”

Imran said so many people made political parties, but they gave up during bad times. “Because I had an idea, I was constantly learning and getting back up on my feet. These two years were the biggest struggle yet, because there were several challenges. The country’s economy had crashed, we were defaulting on payments, we didn’t have money to pay our debts departments had collapsed and government corporations were in debt. There was no one place to concentrate on,” he said, adding that this was a learning experience.

So in the first two years, the prime minister, they understood the challenges the country was facing and then he tried to change its path towards what it was originally made for, a welfare state.

“Today if you ask me what I have tried to do, I will say I have tried to put the country on the path to becoming a welfare state. If we want to progress, we have to go back to that model.”

He stated that Pakistan had an “elite capture,” where a small minority had access to facilities and were taking advantage of the system. “They think they have a privileged position and are above the law. If you think about it, in the past two years, steps were taken for the very first time to bring them under the law.”

Commenting on Pakistan’s success in controlling the coronavirus pandemic, the premier stated that he had always thought about the poor and the vulnerable segment of society when told to impose a lockdown to curb the spread of the illness.

“I was attacked, saying that I don’t understand and am ruining the country but the lowest segment of society should be your priority,” he said, adding that he was being told to impose a total lockdown by the opposition and by certain members of his own party.

“But our conditions were not like that of Italy and Spain. What would we have done about the common man, the labourers, the six to seven people living in one room if we imposed a lockdown? That is why I resisted,” he said.