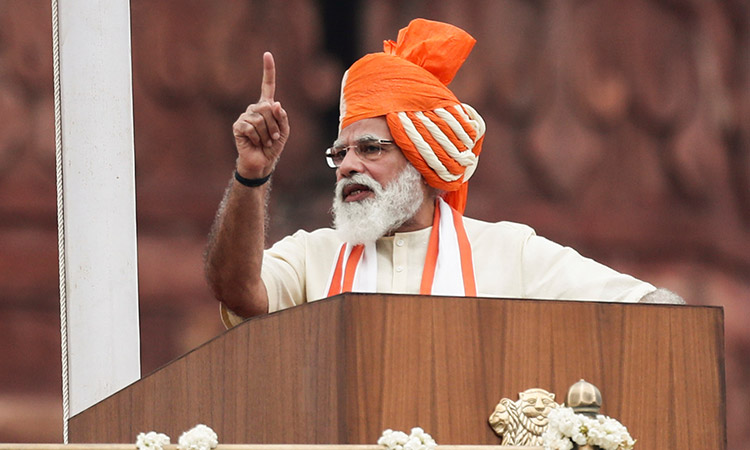 Narendra Modi addresses the nation during Independence Day celebrations at the historic Red Fort in Delhi on Saturday. Reuters

India's Prime Minister Narendra Modi on Saturday issued a veiled warning to China over deadly border tensions while also promising to strengthen the country's military in his Independence Day address at the Delhi Fort.

With talks on easing a military build-up in their Himalayan border region at a stalemate, Modi told an Independence Day ceremony that India's sovereignty was "supreme" and that relations with neighbours depended on security and trust.

“India's integrity is supreme for us. What we can do, what our soldiers can do — everyone saw that in Ladakh,” Modi said, referring to a border clash with Chinese troops in the Ladakh region of the Himalayas on June 15. Twenty Indian soldiers were killed in the clash, which saw the two sides fighting with batons, stones and bare fists.

China has also acknowledged that it suffered casualties but without giving numbers.

Attendance at the historic Red Fort in New Delhi for the speech was cut by more than half to 4,000 people, all of whom sat two metres (six feet) apart because of the coronavirus pandemic.

The Hindu nationalist prime minister mentioned confrontations with Pakistan and China on their disputed borders, but without naming either country. 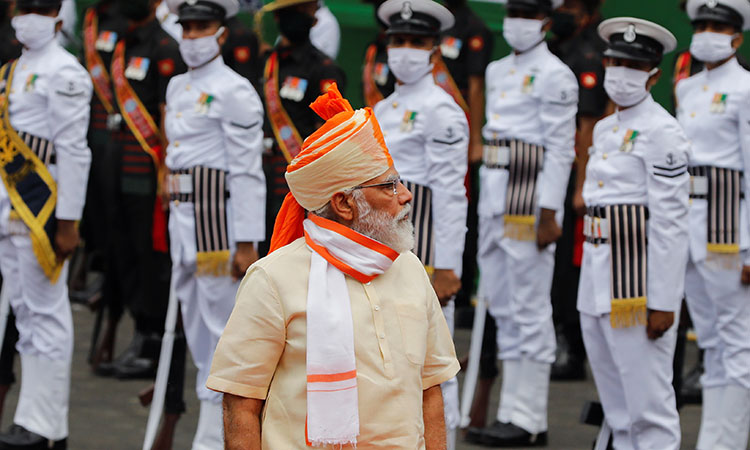 Modi has insisted that no land was lost in the battle but military experts have used satellite images to counter that Chinese troops occupy frontier territory that India had claimed for decades.

India has in turn used economic weapons against China. It has banned at least 59 apps, including the major video-sharing platform TikTok, and taken other measures to freeze Chinese firms out of contracts and block its imports.

Modi said that relations with neighbours are now linked to "security, progress and trust".

"A neighbour isn't just someone who shares our geography but those who share our hearts. Where the relationship is respected, it becomes warmer," he said.

The 1.4-million-strong military would be built up, he added.

"India is just as committed to its security and strengthening its army as the attempts it has made for peace and harmony," he said, stressing efforts to make India "self-reliant" in defence production.

Modi also said that his priority was getting India out of the crisis caused by the coronavirus pandemic.

India is expected to pass 50,000 deaths in the coming days and three million cases within a week. It has the fastest-growing caseload in the world and is now only behind Brazil and the United States in terms of total case numbers.

With the economy expected to shrink this year, Modi reaffirmed an election promise to spend 1.3 trillion dollars on 7,000 infrastructure projects "to get us out of the pandemic situation".