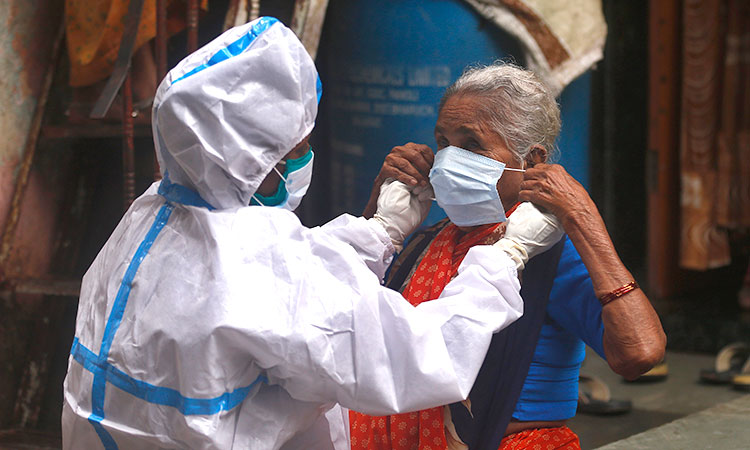 A health worker helps a woman wear a mask before screening her for COVID-19 symptoms in Mumbai, India. File/AP

India’s confirmed coronavirus cases have crossed 2.5 million with another biggest single-day spike of 65,002 in the past 24 hours.

India is behind the United States and Brazil in the number of cases.

The Health Ministry on Saturday also reported another 996 deaths for a total of 49,036.

The average daily reported cases jumped from around 15,000 in the first week of July to more than 50,000 at the beginning of August.

Relatives use ropes to lower the body of a person who died of COVID-19 in New Delhi, India. File/AP

The Health Ministry said the rise shows the extent of testing with 800,000 carried out in a single day. But experts say India needs to pursue testing more vigorously.

India’s two-month lockdown imposed nationwide in late March kept infections low. But it has eased and is now largely being enforced in high-risk areas. The new cases spiked after India reopened shops and manufacturing and allowed hundreds of thousands of migrant workers to return to their homes from coronavirus-hit regions.

The Australian state of Victoria continues to flatten the curve in its wave of coronavirus infections and deaths.

The state on Saturday reported four more COVID-19 deaths and 303 newly confirmed cases in the previous 24 hours. It is the second-lowest daily figure reported in Victoria this month after 278 cases Thursday.

Victoria’s daily case numbers are gradually decreasing, with the seven-day average down to 344 from 521 a week ago.

But authorities warn there is more progress needed before lockdown restrictions in the city of Melbourne can be eased.

Melbourne residents and those in a nearby shire remain subject to strict night-time curfews, time limits on outdoor exercise, distance allowed from home, mandatory public mask wearing and shutdowns of non-essential industries.