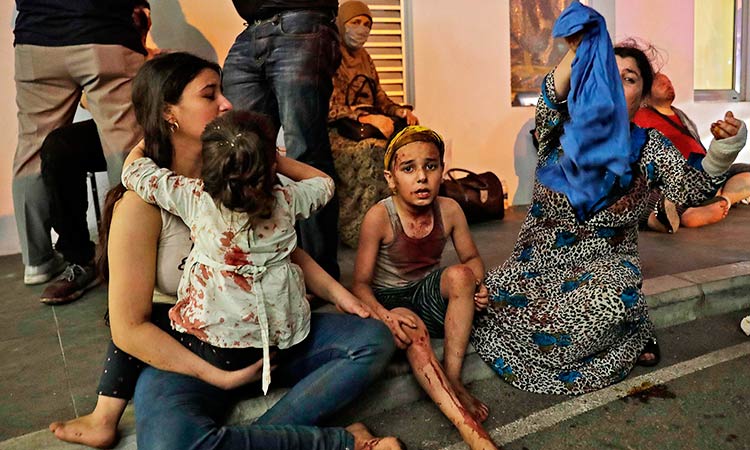 Wounded children near the scene of an explosion in Beirut.

The blast a week ago that temporarily displaced 100,000 children, according to a UN estimate, was so mighty it had the magnitude of an earthquake.

The mental shock it caused among Beirut's youngest was just as powerful.

When the boy saw blood on his feet, "he started screaming: 'Mom, I don't want to die'," Hiba recalled.

"What is this life? Coronavirus and an explosion!," her son told her after the blast.

"Imagine that!" said the mother. "A child only six years old asking this question."

The 35-year-old mother of two, who asked to withhold the names of her children and their family name, said her entire building shook when the catastrophe struck on August 4.

Her son, who was sitting on a living room couch just across from her, was speckled with shards of glass from a blown-out window.

"The shattered glass whirled around us," Hiba said, a scene described by countless survivors.

For a few seconds her son sat motionless and unscathed on the couch.

She then dragged him out of the room, they boy barefoot on a carpet of splintered glass that cut bloody gashes into his feet.

"My son now twitches in panic every time he hears a loud sound," she said. 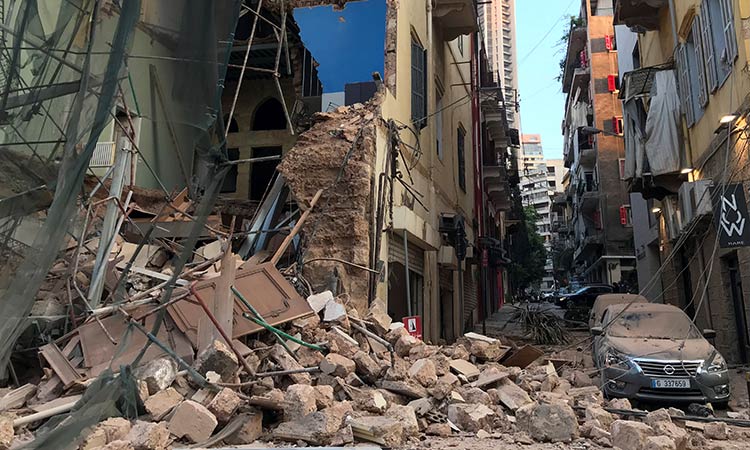 A general view shows the damage along a street, following a blast in Beirut's port area, Lebanon. Reuters

Hiba's son was not the only one left traumatised. His infant sister, born just 16 days before the explosion, lost conciousness for 20 minutes.

"It took a lot of time before she began to wake up and start crying," said Hiba, so shocked herself that she has struggled to breastfeed her since.

She said she now keeps her son in his room, surrounded by his toys, instead of in the living room where the television broadcasts scenes of grief and devastation all day long.

"I don't know if he is bottling up his emotions," Hiba said. "But I'm trying to spend a lot of time with him in case he needs to talk."

The explosion that gutted swathes of the city killed at least 160 people and left 6,000 people physically wounded.

Children are among the casualties and the UN children's agency UNICEF has warned that "those who survived are traumatised and in shock".

In a video widely shared on social media showing plumes of smoke rising from the harbourside, the almost playful voice of a child can initially be heard in the background, saying "explosion, explosion".

When the impact from the massive blast hits him, the same child also screams, in English: "Mom, I don't want to die."

On Lebanese TV, the mother of a three-year-old girl killed in the blast gave an emotional testimony in which she shared her feeling of guilt about having tried to raise a child in a dysfunctional country.

"I want to apologise to Alexandra," she said, "because I did not take her out of Lebanon." 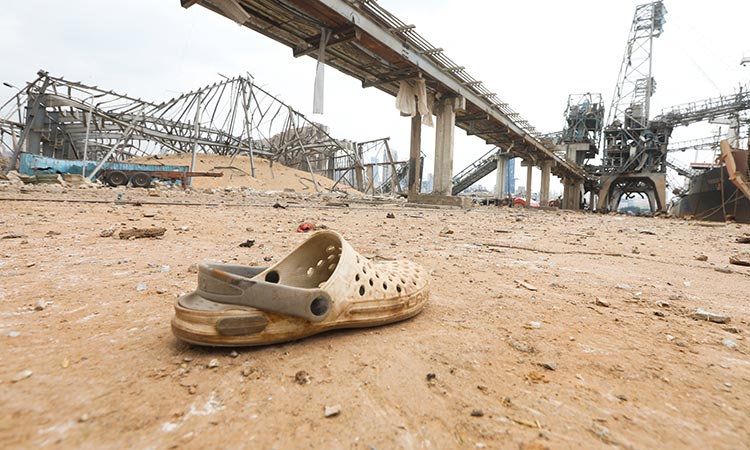 An abandoned shoe is seen at the site of Tuesday's blast, at Beirut's port area, Lebanon, on Friday. Reuters

The Save the Children charity has warned of a severe strain on children's mental health as a result of the blast.

"Without proper support, children might face long-term consequences," it said in a statement.

"The impact on children can be very deep," she said.

Child psychologist Sophia Maamari said traumatised children may also develop separation anxiety that could make them fear even going to the bathroom without one of their parents.

Loud bangs may trigger fears of another blast and some children could go temporarily mute or tend toward self-isolation, the psychologist explained.

Maamari advised that parents should make their children feel like they are allowed to be scared by telling them that they too were frightened by the explosion.

This is one tip Noura picked up online when she was looking for information on how to handle her two traumatised children, aged three and four.

The 34-year-old mother said she had described to her kids in detail how she was gripped by fear and panic.

Her older son immediately responded to her admission by saying: "It was a big bam."

Her youngest did not respond until the next day.

"I was very scared too," she said the little boy whispered into her ear as soon as he woke up.