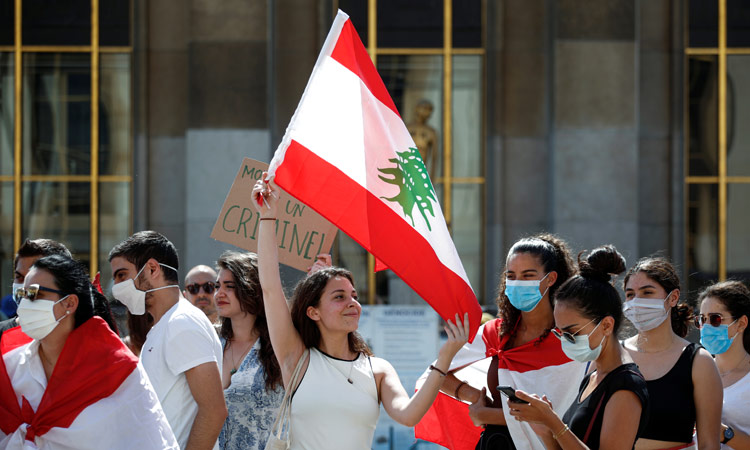 People gather near the Eiffel Tower to stage a demonstration to support the people of Lebanon after Beirut's devastating explosion in Paris on Sunday. Reuters

French organisers said international donors have pledged a total of $298 million in emergency aid during conference for Lebanon. 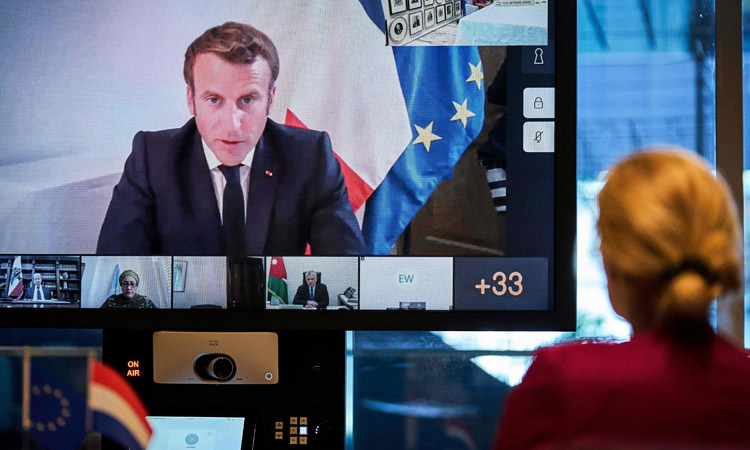 Dutch Minister Sigrid Kaag (R) speaks with Emmanuel Macron (up R) during a donor teleconference in The Hague. AFP

The rebuilding needs of Lebanon are immense, but so is the question of how to ensure the millions of dollars promised in international aid is not diverted in a country notorious for missing money, invisible infrastructure projects and its refusal to open the books. 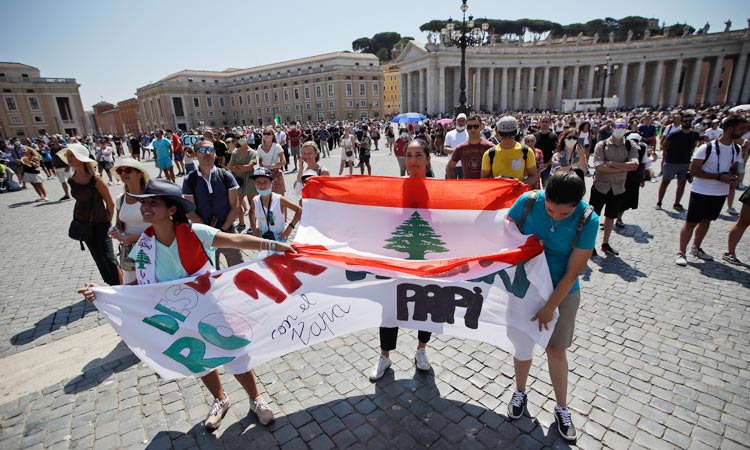 UAE Minister of State for International Cooperation, Reem Bint Ibrahim Al Hashemy, affirmed that the UAE's wise leadership has directed all possible support to the brotherly Lebanese people in the wake of the Beirut port explosion last Tuesday.

To date, 80 tonnes of assistance have been sent over three flights to strengthen the efforts of medical staff working tirelessly to rescue the injured in cooperation with international organisations such as the World Health Organisations, the International Federation of Red Cross and Red Crescent Societies and Lebanese Red Cross, to ensure a swift aid response reaching those in need.

The conference was held remotely today in cooperation with the United Nations. 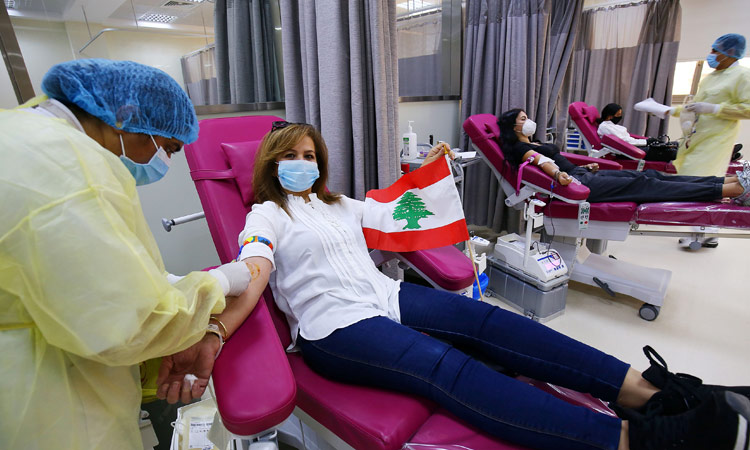 "The UAE affirms that overcoming the current crisis and its repercussions requires that all ports and airports remain under the sole supervision of the Lebanese state and necessitates the activation of Security Council Resolution 1701 on disarmament to limit weapons to the Lebanese Armed Forces," she said.

In the short-term, the aid streaming into Lebanon is purely for humanitarian emergencies and relatively easy to monitor. The US, France, Britain, Canada and Australia, among others, have been clear that it is going directly to trusted local aid groups like the Lebanese Red Cross or UN agencies.

On the other hand, Lebanon's political elite faced pressure from all sides on Sunday after a deadly explosion blamed on official negligence, with the first cabinet resignation over the affair and angry protesters clashing with security forces.

As hopes faded of finding any survivors of Tuesday's blast, social media was flooded with furious posts after a night that saw protesters briefly take over ministries in central Beirut. 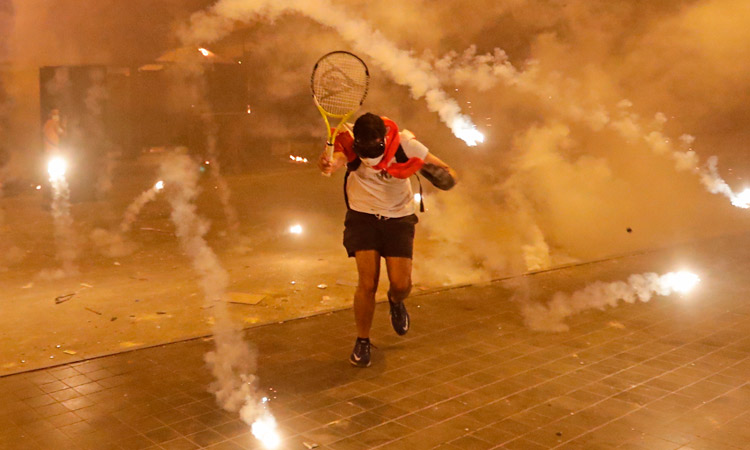 A picture went viral on social media showing the city's devastated port, with a low wall in the foreground bearing the spray-painted message: "My government did this."

While it is not known what started the fire that set off a huge stockpile of ammonium nitrate, protesters say the disaster could not have happened without the corruption and incompetence that have come to define Lebanon's ruling class.

"Those who died paid the price of a state that doesn't care about anything except power and money," said protester Tamara, 23, whose friend Rawan, 20, was killed in the blast.

"It's not enough that ministers resign," said another of her friends, Michel. 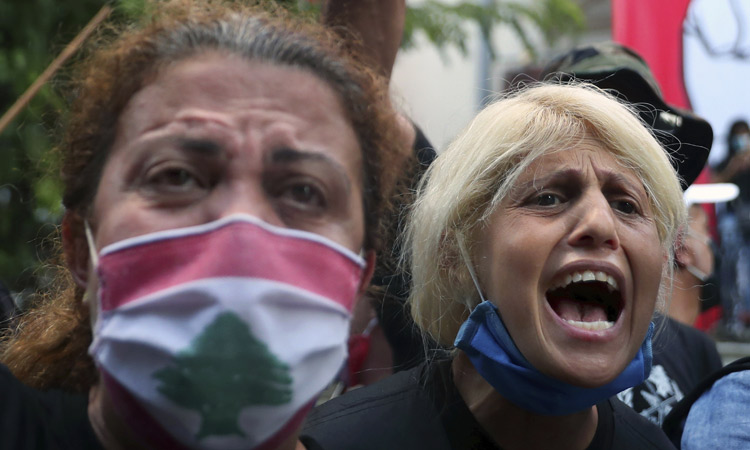 "Those who put the explosives there must be held accountable. We want an international tribunal to tell us who killed (Rawan)."

The explosion devastated Beirut and took the lives of at least 158 people.

The Lebanese army's Colonel Roger Khoury, who was leading a rescue team at the blast site, said Sunday that "we have fading hopes of finding survivors".

The catastrophe has revived the mass anti-government protests that had for months demanded the wholesale removal of Lebanon's political elite, until coronavirus lockdown measures brought an uneasy calm.

On Sunday afternoon, hundreds gathered again in and around Martyrs' Square, a short walk from the site of the blast.

Demonstrators had briefly taken over several government ministries the previous night, while security forces scuffled with larger crowds of protesters converging on the epicentre of the protests.

"Instead of deploying the army to help residents clear rubble from their homes, businesses, and communities, the Lebanese authorities chose to deploy them and other security forces against protesters," she said.