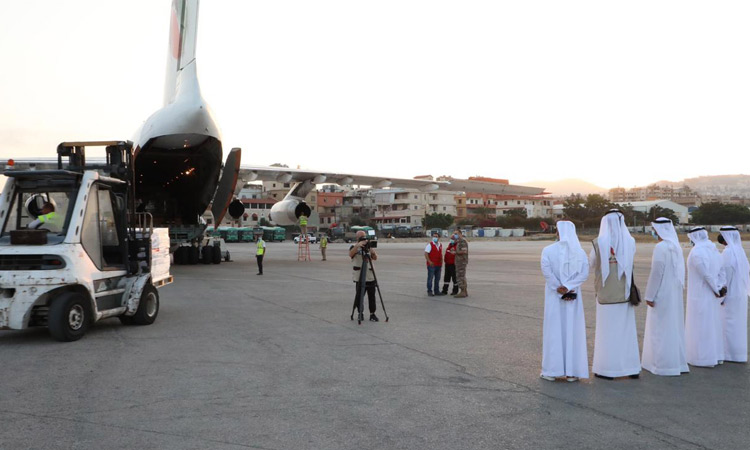 The response plan includes a significant amount of assistance and psychological support for kids. WAM

A UAE plane carrying 40 metric tonnes of critical medical and food supplies and nutritional supplements for kids has arrived in Beirut in support of the victims of the massive explosion that rocked the Lebanese capital on Tuesday.

The urgent humanitarian aid comes in implementation of the directives of His Highness Sheikh Mohamed Bin Zayed Al Nahyan, Crown Prince of Abu Dhabi and Deputy Supreme Commander of the UAE Armed Forces, and under the follow-up of Sheikh Hamdan Bin Zayed Al Nahyan, Ruler's Representative in Al Dhafra Region and Chairman of the Emirates Red Crescent (ERC).

The ERC had rushed to provide the assistance from the country's strategic emergency relief reserve immediately following the blast in implementation of the directives of the UAE wise leadership.

"The directives of the wise leadership fall within the efforts made by the UAE to address disasters and crises around the world," said Dr Mohammed Atiq Al Falahi, the ERC Secretary General, who added that the aid is reflective of the great concern paid by the UAE leaders for and unlimited solidarity with the victims of the explosion. 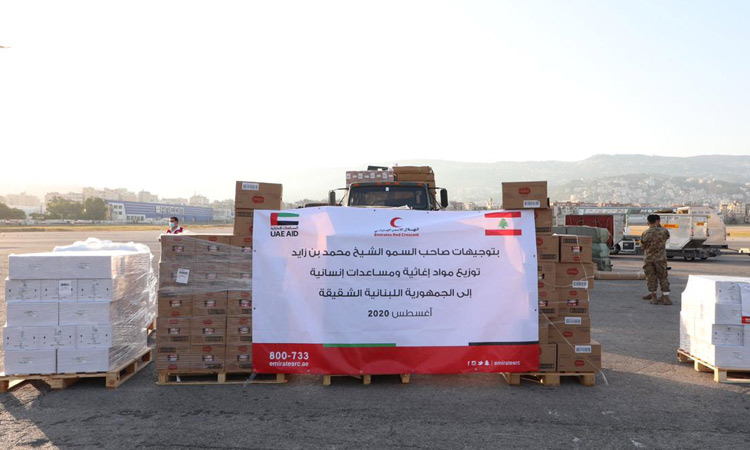 The aid is reflective of the great concern paid by the UAE leaders for and unlimited solidarity with the victims of the explosion. WAM

"A comprehensive phased humanitarian plan has been put in place in response to the crisis, and during this stage the focus is laid on providing medical supplies in support of the Lebanese health facilities under the current tough circumstances to help them respond to the needs of the large number of victims," he added, stressing that the crisis will weigh on the Lebanese medical scene and therefore all possible support should be provided to help the country's authorities survive the fallout of the explosion.

"The response plan includes a significant amount of assistance and psychological support for kids, specially that all available reports indicate an increased number of victims among children," he continued.

The ERC is operating in collaboration with the Humanitarian Assistance Bureau at the UAE Embassy in Beirut to widen the scope of beneficiaries from the UAE aid and set out priorities for the coming period according to the daily follow-up of the situation on the ground in coordination with the relevant Lebanese authorities, he added.

Her Highness Sheikha Fatima Bint Mubarak, Chairwoman of the General Women's Union, President of the Supreme Council for Motherhood and Childhood, and Supreme Chairwoman of the Family Development Foundation, and Honorary President of the Emirates Red Crescent, ERC, has donated Dhs10 million to support their relief programmes for all those affected by the Beirut port explosion, reinforcing the ERC’s efforts to mitigate the effects of this disaster.

"The donation is a part of Sheikha Fatima’s initiatives to support the people affected by disasters and crises around the world, and represents her solidarity with the Lebanese people in these dire conditions," the ERC stated.

The ERC highlighted the fact that the donation strengthens the relief efforts of the ERC in Lebanon, and contributes to providing humanitarian services that will fulfil the urgent need of health organisations for medical supplies to tackle the numerous health challenges they face after the disaster.

The ERC hailed the efforts of Sheikha Fatima in the humanitarian field and her efforts to reduce the suffering of mankind in general, and in supporting victims of disasters and crises everywhere.

Separately, Dr Hamdan Musallam Al Mazrouei, Chairman of the Board of Directors of the Emirates Red Crescent, ERC, announced that he and his family are donating Dhs1 million to provide for the humanitarian needs for victims of Beirut’s port explosion.

Dr Al Mazrouei said, "We saw what happened to Lebanon and the destruction that took place, and we remember the words of the late Sheikh Zayed Bin Sultan Al Nahyan, ‘The wellbeing of Lebanon is just like the wellbeing of the UAE and any other Arab country’ and we shall follow the path of the Founding Father, as Lebanon’s wellbeing shall make us happy and whatever harms it will make us sad. That is why the UAE presidential aircraft was among the first to arrive in Beirut with medical and humanitarian aid for the Lebanese people."