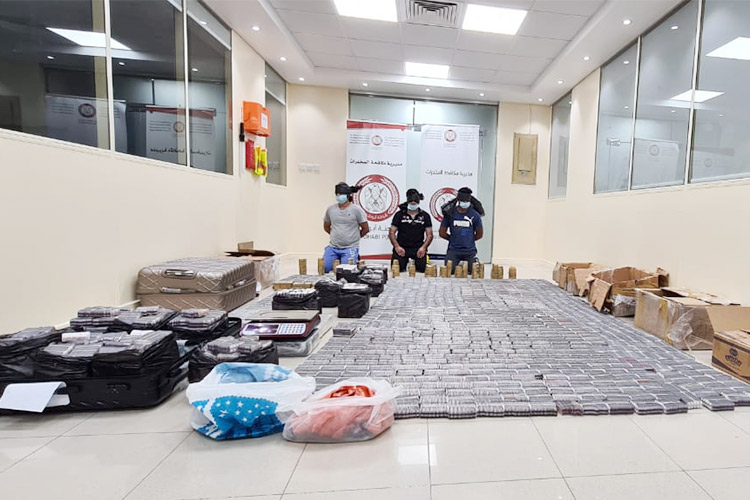 The culprits in police custody with narcotic substances.

Police surveillance tracked down the gang for four continuous months to know the track of their operation, and the first suspect was arrested while carrying 120,000 drug pills.

Investigations also lead to the capture of the second suspect who was also caught red-handed while possessing 15,000 drug pills.

The second suspect turned out to be one of the headmasters of the drug trafficking operation who is responsible for selling the drugs.

Police investigations lead to the capture of each and every gang member who intended to smuggle some of the drugs to a neighboring country.

Police stressed on their keenness in foiling such illegal operations, and pointed out that fight drug trafficking is a community responsibility to ensure the safety of youth.

Police officials urged families and individuals to help them fight drugs and report any illegal drug trafficking and usage through Aman toll service 8002626, in order to keep a safe community.

Abu Dhabi Police: Leaving children alone in vehicles while shopping is a ‘crime’

Abu Dhabi Police appealed to drivers not to leave children inside vehicles alone while shopping or for any other reason and endanger their lives as this is a crime punishable by law and everyone who proves negligent in such cases will be referred to the judicial authorities to take legal actions against them.