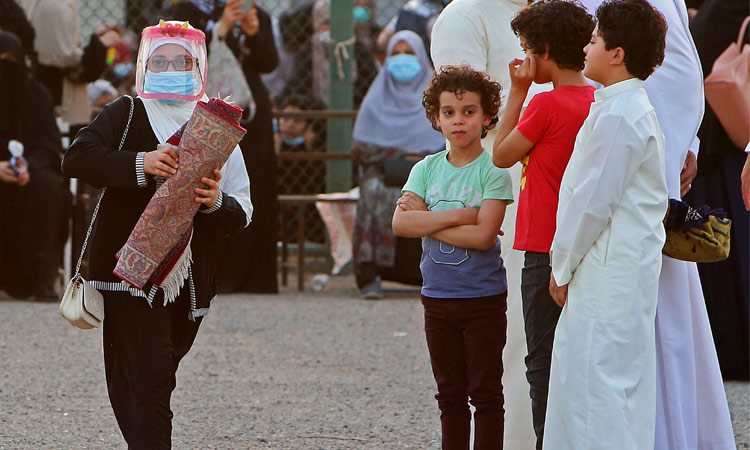 Worshippers perform prayers at a stadium in Bayan district in Kuwait City on Friday. AFP

Masked and socially distanced to fight the coronavirus, Muslims around the world held prayers on Friday to mark the festival of Eid Al Adha, with mosques at reduced capacity and some praying in the open air. 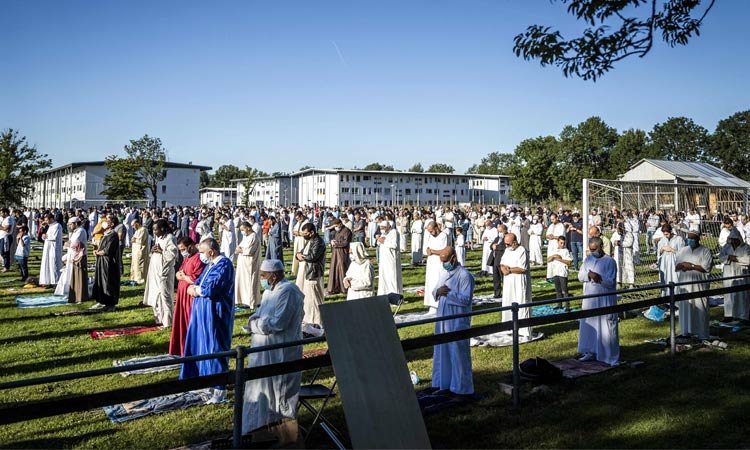 Worshippers pray on a football field in Amsterdam on the first day of Eid Al Adha. AFP

Saudi Arabia and European countries, as well as United Arab Emirates, Indonesia and Malaysia, are celebrating Eid Al Adha amid the coronavirus pandemic.

Saudi Arabia’s King Salman Bin Abdulaziz, 84, tweeted holiday congratulations a day after leaving hospital in Riyadh. The Hajj pilgrimage is being held in the country with attendance drastically reduced.

In Saudi Arabia, Eid prayers were offered at Masjid-e-Nabvi and the Grand Mosque in Makkah after the pilgrims spent the entire night on Mount Arafat offering prayers in Muzdalifa. 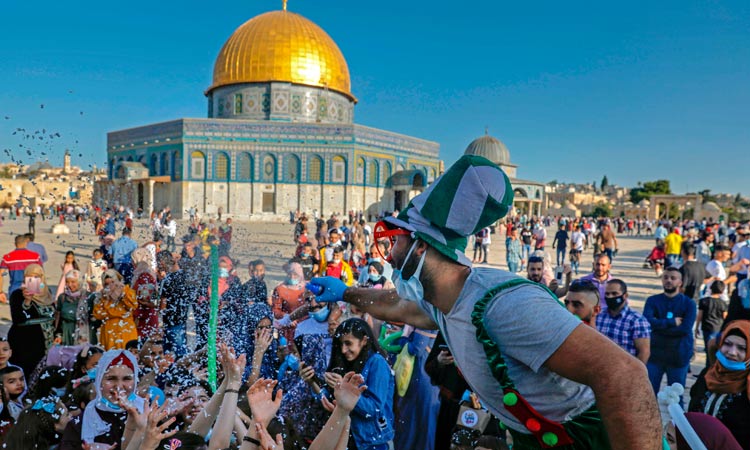 The pilgrims moved to Mina on Friday morning where they will performing the stoning of the devil at Jamarat Al Aqba, sacrifice animals, shave their heads and then leave for Makkah to perform Tawaf Al-Ifada and Sai. 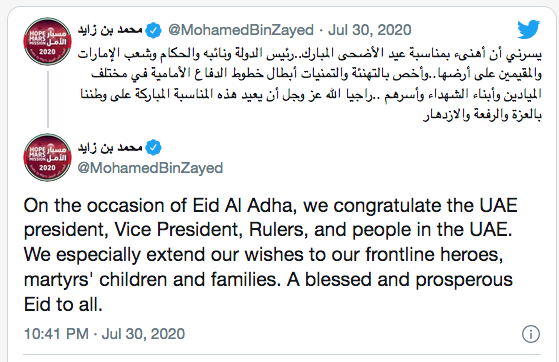 “On the occasion of Eid Al Adha, we congratulate the UAE president, Vice President, Rulers, and people in the UAE. We especially extend our wishes to our frontline heroes, martyrs’ children and families. A blessed and prosperous Eid to all,” he said. 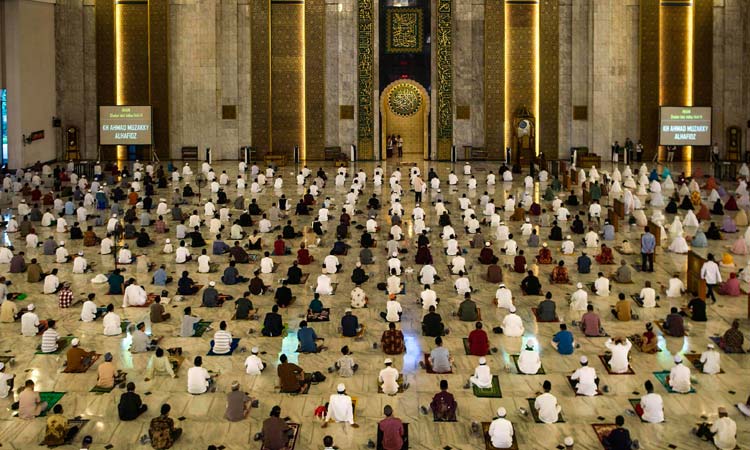 In Turkey, people gathered outside the Hagia Sophia for Eid ul Adha prayers, the first time it has taken place since the building was reconverted to a mosque earlier this month.

Turkish President Recep Tayyip Erdogan in his message on the occasion of Eid praised the country's fight against the coronavirus and urged the citizens to abide by social distancing rules as they marked the festival.

“I wish Eid Al Adha may bring serenity to our hearts, well-being to our country and peace to our world. Eid Mubarak!,” Erdogan said in a statement. 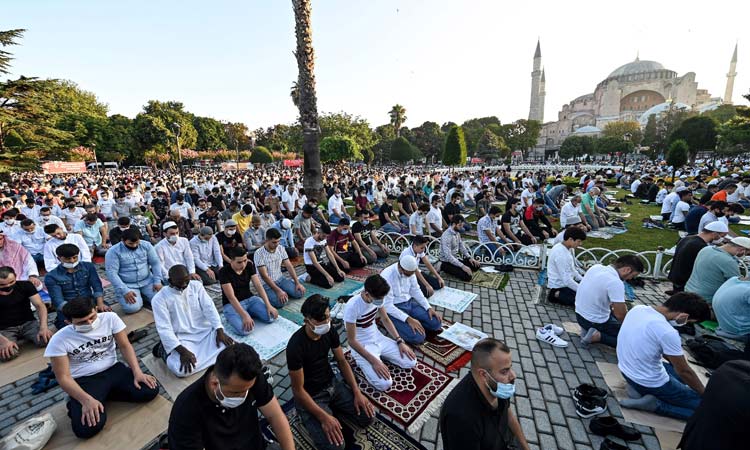 In Lebanon, devastated by economic crisis, many found it hard to afford traditional Eid customs. In Tripoli, the country's second city, there were no decorations or twinkling lights, and no electricity to power them. Instead, a large billboard read: "We're broke."

Around the world, the festival had to fit in with the realities of the coronavirus.

In Indonesia, the religious ministry asked mosques to shorten ceremonies, while many cancelled the ritual of slaughtering livestock and distributing meat to the community. 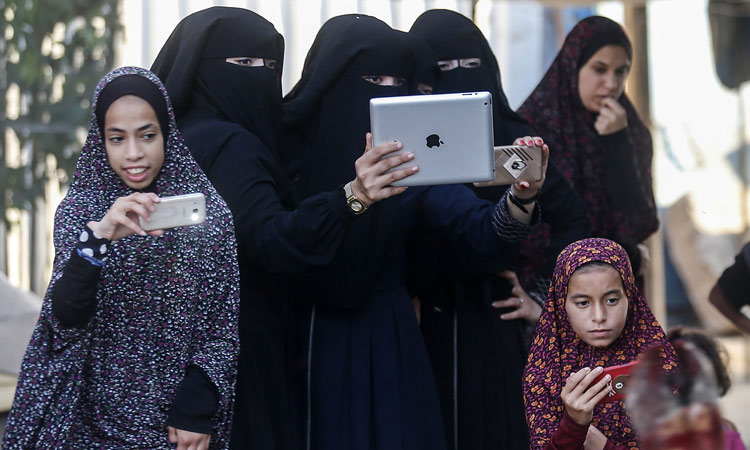 Palestinians watch the slaughtering of calves on the first day of Eid Al Adha in Rafah. AFP

"This year's Eid Al Adha is very different from previous years because we need to follow health protocols as we perform prayers, like maintaining social distancing," said Devita Ilhami, 30, who was at the Sunda Kelapa mosque in Jakarta.

She said they had to bring their own prayer mats, with markers on the ground to show where they should be laid.

Elsewhere in Asia, Muslims including in Thailand and Malaysia prayed in or outside mosques wearing masks.

In Malaysia, while some mosques cancelled the ritual of slaughtering livestock, 13 cows were killed in the traditional way, but under rules limiting the number of animals and people at the Tengku Abdul Aziz Shah Jamek mosque in Kuala Lumpur.

Afghan President Ashraf Ghani attended prayers in Kabul. Taliban say they will observe a three-day ceasefire for the holiday, offering some respite from weeks of violence.

In India, where Eid will be celebrated mostly from Saturday, several states have eased coronavirus restrictions to allow worshippers to gather in mosques in limited numbers.

"Only small groups of worshippers will be allowed into mosques," said Shafique Qasim, a senior cleric at the Nakhoda mosque in the eastern city of Kolkata