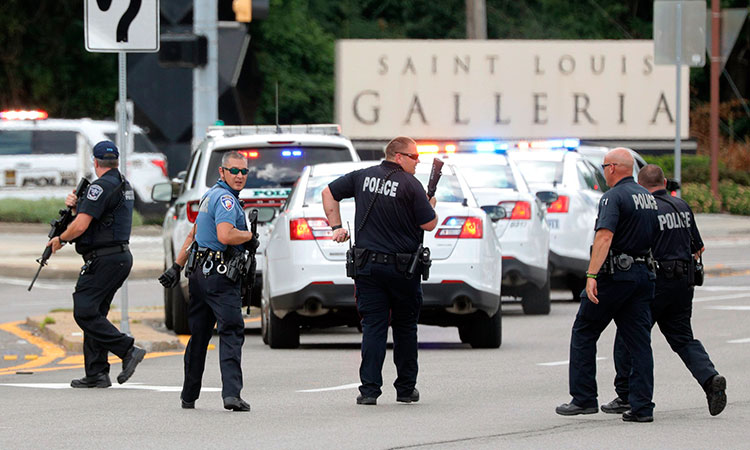 Police officers search for a suspect in the reported shooting near the St. Louis Galleria looking on Wednesday. AP

US President Donald Trump announced he was deploying more federal agents to Chicago and other major cities Wednesday to help battle a jump in gun violence and shooting deaths.

The move came a day after 15 people in Chicago, the country's third largest city, were wounded in a drive-by shooting at a funeral for a man recently gunned down in what police called gang violence.

But officials made clear that the government was not sending paramilitary forces in to address protests, as it has in a deeply controversial move in Portland, Oregon.

"I'm announcing a surge of federal law enforcement into communities plagued by violent crime," Trump said at the White House, with Attorney General William Barr and the FBI and Department of Homeland Security chiefs in the audience. 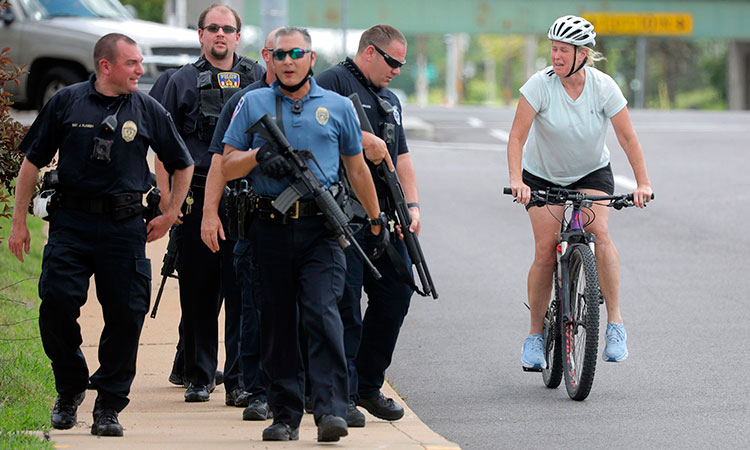 Police with their guns drawn walk along Brentwood Boulevard near the St. Louis Galleria on Wednesday. AP

"We want to make law enforcement stronger, not weaker," he said, adding that, for the cities, "Help is on the way."

- Epidemic of gun violence - Barr said officers from the FBI, US Marshals Service, Drug Enforcement Administration, and Bureau of Alcohol, Tobacco and Firearms, would be boosted in Chicago and Albuquerque, New Mexico, as part of ongoing Operation Legend, named after four-year-old LeGend Taliferro, shot and killed while he slept on June 29 in Kansas City.

Around 200 officers from those bodies have already been deployed in Kansas City to help with the gun violence there.

The operation is "to protect the residents of those cities from senseless acts of deadly violence by targeting those involved in gang activity and those who use guns to commit violent crime," said Barr.

Some 200 more agents would be deployed to Chicago and another 30 to Albuquerque, Barr said.

Shootings have spiked in a number of US cities this summer. Chicago has suffered about 1,640 shootings and 414 murders this year, according to police data.