Pakistani police registered a case against a man and his wife on Wednesday for thrashing his mother severely after a video of the incident went viral on social media.

The Rawalpindi police filed a case against the suspect, Arsalan and his wife, for beating the former’s mother severely. The woman said that her son and daughter-in-law fought with her every day and that they had both thrashed her.

A video which went viral on social media showed a man beating his mother while his wife stood in the background, encouraging him.

The woman can be seen pleading with her son repeatedly to stop but he continues to thrash her.

The video generated hue and cry on Twitter with many calling for the man to be arrested for subjecting his mother to torture. Among the people who have spoken up on the incident are many renowned public figures.

Pakistani actor Hamza Ali Abbasi expressed complete disdain for the actions of the man in the video. "Ya Allah. I don't have words. At all...cant post that video.. deleted it. Oh my God deepest corner of hell awaits this demon who raised his hands on his old mother. Deepest most rotten corner of hell," he said.

Another Pakistani star Ushna Shah while sharing the clip of the incident talked about how just viewing it took an emotional toll on her. 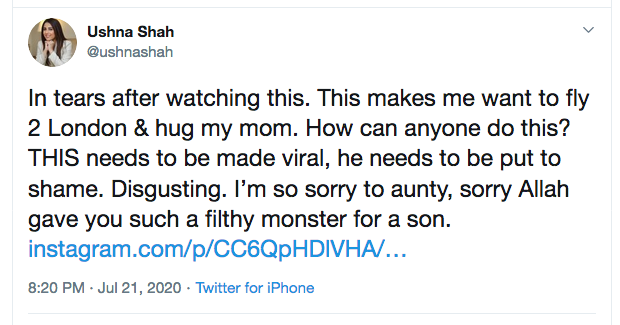 "In tears after watching this. This makes me want to fly to London and hug my mom," the Bewafa actor noted. Adding further she talked about the perpertrator needs to be brought to justice. "How can anyone do this? This needs to be made viral, he needs to be put to shame. Disgusting. I’m so sorry to aunty, sorry Allah gave you such a filthy monster for a son," she said. Her co-star from ‘Bewafa,’ Ali Rehman Khan also demanded swift justice in this regard. "Despicable and disgusting. How can one even think of raising their hands and calling their mother names? Appalled and sick to the stomachs he needs to be in prison!" he said. Echoing the same sentiments, actor Armeena Khan noted that she was unable to even watch the video properly. "I’ve seen a video of this horrible human being beating his parent up. I didn’t have the heart to switch the sound on, just the video upset me beyond anything. I wish I was there to protect the poor woman. This fiend and his wretched accomplice need to be put behind bars!" she said.

Meanwhile, Punjab Chief Minister Usman Buzdar took notice of the incident and asked the regional police officer of Rawalpindi to submit a report regarding the matter.
Buzdar said that the government will ensure that the man who subjected his mother to a beating is arrested.