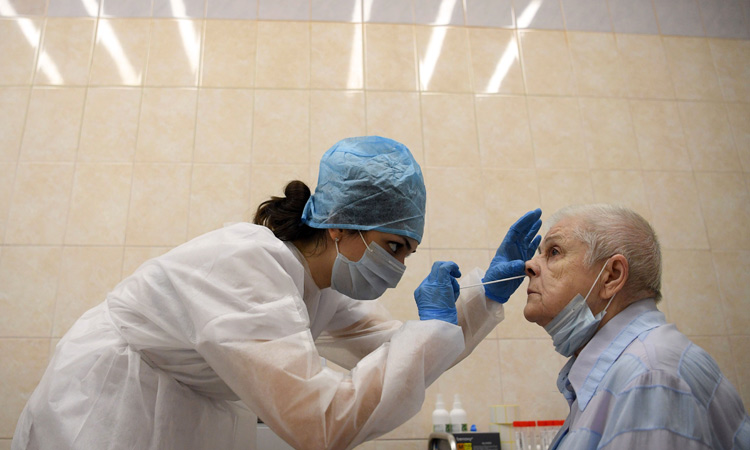 A medical worker takes a swab from a woman at a medical facility in Moscow on Thursday. AFP

Britain, the United States and Canada accused Russian hackers on Thursday of trying to steal information from researchers seeking a coronavirus vaccine, warning scientists and pharmaceutical companies to be alert for suspicious activity.

"It is completely unacceptable that the Russian Intelligence Services are targeting those working to combat the coronavirus pandemic,'' British Foreign Secretary Dominic Raab said in a statement, accusing Moscow of pursuing "selfish interests with reckless behaviour.”

Russia's Foreign Ministry did not immediately respond to a request for comment.

The persistent and ongoing attacks are seen by intelligence officials as an effort to steal intellectual property, rather than to disrupt research.

Britain's NCSC said its assessment was shared by the US Department of Homeland Security, the Cybersecurity Infrastructure Security Agency and the National Security Agency, and by the Canadian Communication Security Establishment.

It was unclear whether any information actually was stolen, but the UK says individuals’ confidential information is not believed to have been compromised.

The UK statement did not say whether Russian President Vladimir Putin knew about the vaccine research hacking, but British officials believe such intelligence would be highly prized.

A 16-page advisory prepared by Western agencies accuses Cozy Bear of using custom malicious software to target a number of organizations globally. The malware, called WellMess and WellMail, has not previously been associated with the hacking group, the advisory said.

The US Department of Homeland Security’s cybersecurity agency warned in April that cybercriminals and other groups were targeting COVID-19 research, noting at the time that the increase in people teleworking because of the pandemic had created potential avenues for hackers to exploit.

The global reach and international supply chains of these organisations also make them vulnerable, the US Cybersecurity and Infrastructure Security Agency said in an alert published in conjunction with its counterparts in Britain.