Hope Probe being readied for launch at the Tanegashima Space Centre in Japan on Monday.

The Emirates Mars Mission, “Hope Probe” or “Al Amal” in Arabic, is scheduled to liftoff early on Wednesday (00:51am UAE local time) from Japan’s Tanegashima Space Centre and begin a seven-month journey to the Red Planet. The probe is expected to entre Mars’ orbit in 2021, coinciding with the UAE’s 50th anniversary.

The mission will contribute vital knowledge to the global space community and prove that the UAE, a young nation with a newly-formed space exploration programme, can achieve this breakthrough by prioritising an ambitious advanced sciences agenda.

Days before this historic liftoff, two barrier-breaking leaders, UAE Minister of State for Advanced Technology and Deputy Project Manager of the Emirates Mars Mission Sarah Al Amiri, and Dr Ellen Stofan, Director of the Smithsonian’s National Air and Space Museum and former Chief Scientist of NASA, offered these views on A Reason for “Hope,” the third episode of Podbridge, a new podcast series launched by the UAE Embassy and hosted by Yousef Al Otaiba, UAE Ambassador to the US. 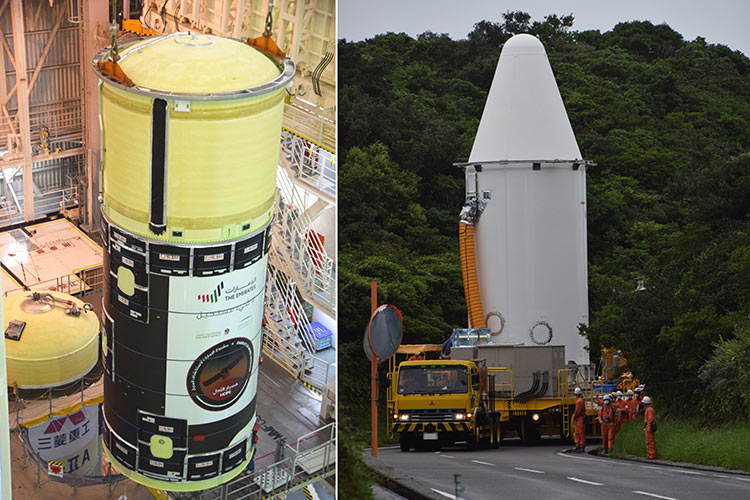 However, according to a Japanese rocker provider there was a chance of a delay because of bad weather.

A final decision will be made on Tuesday before the roll out of the rocket, said Keiji Suzuki, launch site director for Mitsubishi Heavy Industries. A seasonal rain front was expected to cause intermittent lightning and rain over the next few days, he said.

“But this thunder is not expected to be severe or lasting, and our assessment is that there will be a chance for a launch,” Suzuki told an online briefing on Monday from Tanegashima. “We will make a careful decision based on data.”

The Emirates Mars Mission (EMM) is designed to orbit Mars and study the dynamics in the Martian atmosphere on a global scale, and on both diurnal and seasonal timescales. Using three scientific instruments on board of the spacecraft, EMM will provide a set of measurements fundamental to an improved understanding of circulation and weather in the Martian lower and middle atmosphere. Combining such data with the monitoring of the upper layers of the atmosphere, EMM measurements will reveal the mechanisms behind the upward transport of energy and particles, and the subsequent escape of atmospheric particles from the gravity of Mars.

EMM will begin its journey to Mars from the Tanegashima Island in Japan. On the launch day, July 15, the Hope Probe will take-off on a Mitsubishi H-IIA rocket toward the east, on a trajectory that takes it over the Pacific Ocean.

As the rocket accelerates away from the Earth, the solid rocket boosters are expended, followed by jettisoning the fairing once it is no longer needed to protect the Hope Probe from the Earth’s atmosphere.

Once the first stage is completed, the rocket is jettisoned and put into the Earth’s orbit. It stays in the Earth’s orbit until the exact alignment with Mars is achieved after which it is reignited to push it on a trajectory towards Mars. With the right direction and velocity of 11km/s, the upper stage gently deploys the Hope Probe.

Once the Hope Probe separates from the upper stage, an automated sequence will begin to awaken the probe. The central computer will boot up and turn on the heaters to prevent the fuel from freezing. It will then deploy the solar array panels and use the sun sensors to find the sun and manoeuvre in such a way that the solar arrays begin to charge the onboard battery.

With the power switched on, the Hope Probe will start transmitting to Earth, with the NASA Deep Space Network ground station in Madrid ready to pick up on the signals. Once the signal is received on the ground station, the EMM Operations Team will begin their checks on the spacecraft.

After the communications system is checked out, the control system will ensure that the spacecraft is pointed in the right direction. The propulsion system onboard will ensure detailed manoeuvres to refine the Hope Probe’s trajectory towards Mars.

'Hope Probe' is a distinguished example of UAE's strategic partnership with Japan: Abdullah