Remdesivir all set to be first COVID-19 therapy - GulfToday

Remdesivir all set to be first COVID-19 therapy 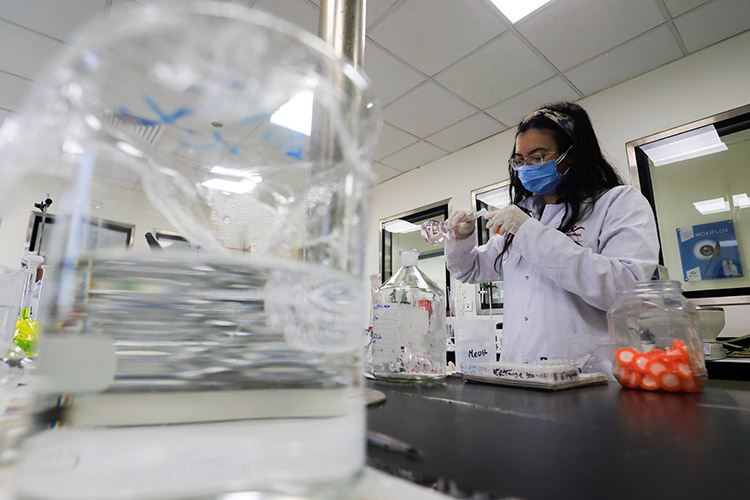 A pharmacist doctor works on the basics of the raw materials for ‘Remdesivir’ in Cairo. Reuters

Doctors in Europe will soon be able to treat COVID-19 patients with Gilead’s antiviral drug, Remdesivir, after the healthcare regulator’s endorsement put it on track to become the first therapy for the disease on the continent.

The European Medicines Agency (EMA) said on Thursday its human medicines committee (CHMP) recommended conditionally approving the drug for adults and adolescents from 12 years of age who are also suffering from pneumonia and require oxygen support.

European Union conditional marketing authorisation allows a treatment to be sold for a year in the 27-nation bloc before all necessary data on its efficacy and side-effects are available. Gilead has until December to submit this data.

The EMA endorsement means physicians can prescribe the Gilead drug in Europe once the European Commission, the EU executive, gives its approval, which is now a formality expected over the coming week.

Europe is facing an upsurge in coronavirus cases, the World Health Organisation (WHO) warned on Thursday, as the disease continued its rampage through the Americas.

The WHO said some European health systems risked being overwhelmed, yet officials have continued to rescind restrictive measures designed to combat the virus’s spread, with France reopening the Eiffel Tower to tourists for the first time in three months.

The Abu Dhabi Stem Cell Centre (ADSCC) has now treated more than 2000 patients suffering from COVID-19, with 1200 already fully recovered from the effects of the virus.

ADSCC announced on Thursday that it had succeeded in ramping up the number of treatments from the 73 in the initial clinical trial. The large increase was as a result of a major effort by staff at the centre to treat as many people as possible following the UAE Government’s decision to make it available free of charge to all moderate-to-high risk COVID-19 patients in the country.

The total number of recovered cases has reached 35,165. with 760 cases recovered on Thursday after receiving treatment.

The Ministry also announced the death of one person who tested positive for COVID-19, due to complications. This brings the total death toll to 308.

A new set of regulations came into force on Thursday for the expatriates returning to their home state of Kerala.

The state had on Wednesday cancelled its order making it mandatory for all to carry a Covid-19 negative certificate of tests taken within 48 hours of departure.

Returning migrants should now undergo the test within 72 hours of their departure wherever possible and carry the certificate.

Passengers from other countries should wear PPE to limit the chances of virus transmission.

All of them should have registered on the state’s COVID-19 Jagratha portal, aimed at tracking their movements, before boarding the flights.

Those chartering them should pass details of passengers a week before the departure.

All including those with no symptoms must undergo a rapid antibody test on arrival.

The Americas are bearing the brunt of the virus at the moment, with total deaths in Latin America and the Caribbean passing 100,000.

New cases are also on the rise in the south and west of the United States, with White House adviser Anthony Fauci warning the next two weeks would be “critical.”

Texas Governor Greg Abbott said his state, which was one of the most aggressive about reopening, could see new restrictions.

While the situation in Europe and the Americas continued to cause global concern, localised outbreaks in Asia and the Middle East also raised alarm bells.

Neighbouring Iraq, too, registered more than 100 deaths on Thursday, a national record.

China declared that it had controlled an outbreak in Beijing that had briefly raised fears of a second wave and prompted restrictions and several million tests.

More than 9.33 million people have been reported to be infected by the novel coronavirus globally and 478,126 have died, according to a Reuters tally. Infections have been reported in more than 210 countries and territories since the first cases were identified in China in December 2019.

A video of the incident, widely shared on the social media, shows Macron walking through the crowd when an egg bounced off him without breaking while a protester shouted long live the revolution.

'A meeting of the minds, and communication through culture… This is how we create the future, right here from Expo 2020 Dubai. I am so proud of our teams for all their efforts to make this a reality,' says Hamdan

An Asian businessman accused his chef of stealing seafood worth Dhs15,000 and some cash from his house after quitting his job over a dispute between them.