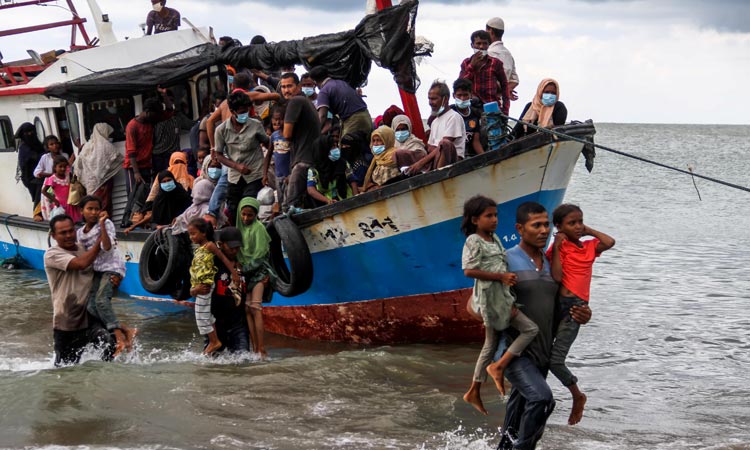 Locals evacuate Rohingya refugees from a boat at a coast of North Aceh, Indonesia, on Thursday. Reuters

Nearly 100 Rohingya asylum seekers stranded off the coast of Indonesia were pulled to shore on Thursday by locals angered at the refusal of authorities to give them shelter over coronavirus fears.

Some 94 people from the persecuted Myanmar minority — including 30 children — were reportedly plucked from a rickety wooden boat by fishermen this week before being intercepted by maritime officials from Sumatra island who pulled them closer to shore.

But officials in Lhokseumawe city on Sumatra's northern coast refused to allow the group to land, citing coronavirus concerns. Angry locals took matters into their own hands by jumping into boats on Thursday, which they used to pull the asylum seekers to shore. 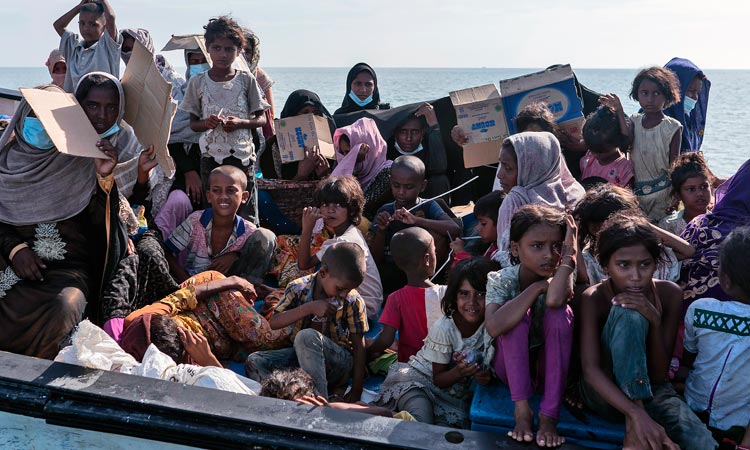 Rohingya people sit on a crowded boat as they arrival on Lancok Beach, North Aceh. AP

Residents gathered on a local beach cheered the move, according to an AFP reporter on the scene.

"It's purely for humanitarian reasons," said fisherman Aples Kuari. "We were sad seeing kids and pregnant women stranded at sea," he added.

Amnesty International praised the spirit of the rescue. "Today's disembarkation of Rohingya refugees is a moment of optimism and solidarity," said Indonesia Executive Director Usman Hamid in a statement.

"It's a credit to the community in Aceh who pushed hard and took risks so that these children, women and men could be brought to shore. They have shown the best of humanity."

Earlier on Thursday, local police chief Eko Hartanto said they wanted to send the Rohingya back to sea rather than give them temporary shelter.

But authorities appeared to soften that stance in the face of local protests, and the weary group are now temporarily being put up in private residences. 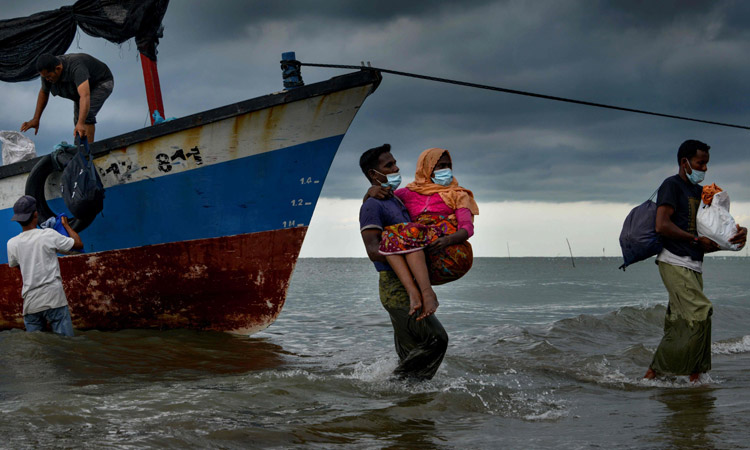 The Rohingya would be checked by medical staff to ensure they were virus-free, according to Aceh's rescue agency.

Indonesia and neighbouring Malaysia are favoured destinations for Muslim Rohingya fleeing persecution and violence in mostly Buddhist Myanmar, with thousands trying a perilous escape via smugglers across the sea every year.

Muslim-majority Indonesia has previously allowed Rohingya refugees to land and allowed many to stay.

But their plight has been compounded in recent months as officials have turned them away over concern they could be harbouring the deadly coronavirus.

On Wednesday, a coastguard official in Malaysia said dozens of Rohingya were believed to have died during a four-month boat journey to that Muslim-majority nation.

There had been more than 300 people on board the boat which was intercepted by authorities earlier this month, with 269 survivors given temporary shelter.

"Some of them died at sea. They were thrown overboard," Zubil told reporters, without specifying the exact number.