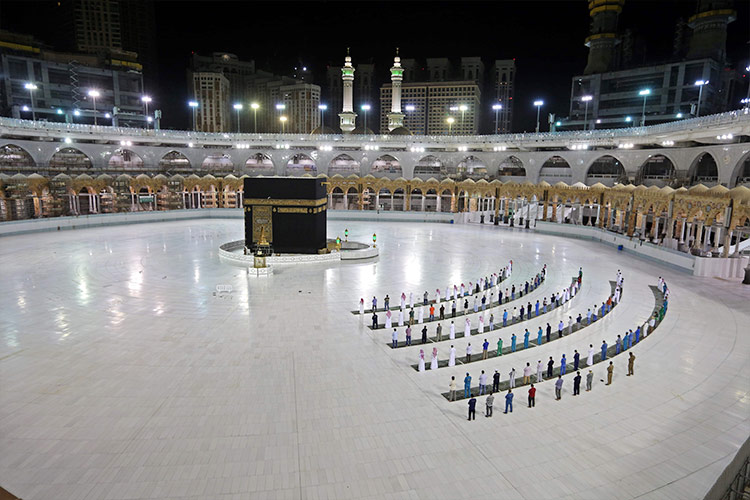 A few worshippers performing Al-Fajr prayer at the Kaaba in Makkah. AFP

Saudi Arabia said on Tuesday it will allow a drastically scaled-back Hajj pilgrimage for around 1,000 pilgrims already present in the kingdom, as it battles a coronavirus surge.

The reduced number is a far cry from the 2.5 million who attended the five-day ritual last year, and it remains unclear what the selection process will be for this year's Hajj, scheduled for the end of July.

"The number of pilgrims will be around 1,000, maybe less, maybe a little more," Hajj Minister Mohammad Benten told reporters in Riyadh. 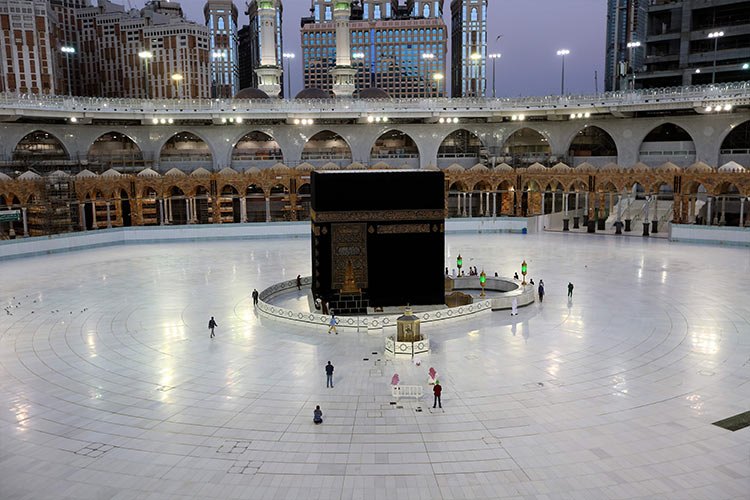 "The number won't be in tens or hundreds of thousands" this year, he added.

The pilgrimage will be limited this year to those below 65 years of age and with no chronic illnesses, Health Minister Tawfiq al-Rabiah said.

The pilgrims will be tested for coronavirus before arriving in the holy city of Mecca and required to quarantine at home after the ritual, Rabiah added.

The Saudi decision to hold a "very limited" Hajj is fraught with political and economic peril and comes after several Muslim nations pulled out of the annual ritual that forms one of the main pillars of Islam.

The Hajj -- a must for able-bodied Muslims at least once in their lifetime -- could be a major source of contagion, as it packs millions of pilgrims into congested religious sites.

The decision comes as Saudi Arabia grapples with a major spike in infections, which have now risen to more than 164,000 cases -- the highest in the Gulf -- with nearly 1,350 deaths.

"Saudi Arabia has chosen the safest option that allows it to save face within the Muslim world while making sure they are not seen as compromising on public health," Umar Karim, a visiting fellow at the Royal United Services Institute in London, told AFP.

Saudi Arabia has said the Hajj will be open to people of various nationalities already in the kingdom, without specifying how many Saudis will be permitted or what the selection process will be.

But Benten said the government will work with various diplomatic missions in the kingdom to select foreign pilgrims residing in Saudi Arabia who fit the health criteria. 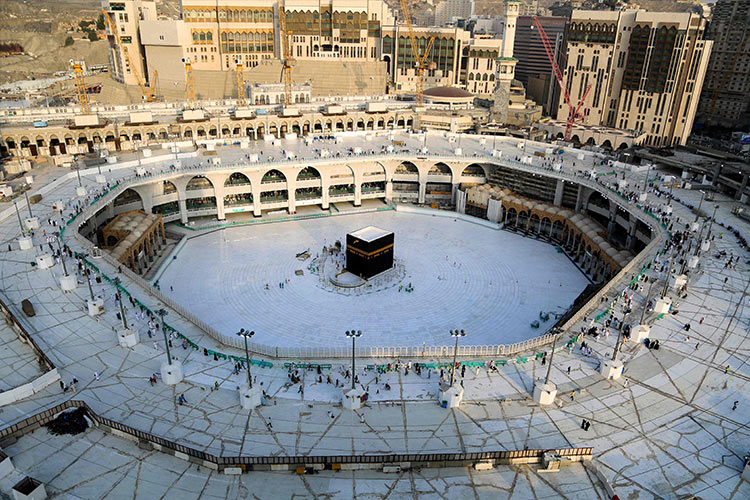 Workers disinfect the area around the Holy Kaaba in Makkah. File/ AFP

The decision has disappointed Muslim pilgrims around the world who often invest their life savings and endure long waiting lists to make the trip.

"My hopes of going to (Mecca) were so high," said Kamariah Yahya, 68, from Indonesia, the world's most populous Muslim nation, which had already barred its citizens from the Hajj earlier this month.

"I've been preparing for years. But what can I do? This is Allah's will -- it's destiny."

Shahid Rafique, chairman of a Pakistani Hajj tour operators' group, said it was "a moment of sorrow for all the Muslims".

In a statement that gave the decision the cover of religious sanction, the Saudi-based Muslim World League and the Organisation of Islamic Cooperation said they endorsed the government move for the health and safety of pilgrims, according to state media.

The prestigious Islamic institution Al-Azhar in Cairo also welcomed the Saudi move, calling it "wise and based on Islamic jurisprudence".

Ahmed al-Khoury, a Jordanian resident of Riyadh, shrugged off the coronavirus health warnings, telling AFP he saw "no reason" to cancel or limit the pilgrimage.

A scaled-down Hajj represents a major loss of revenue for the kingdom, already reeling from the twin shocks of the virus-induced slowdown and a plunge in oil prices.

The smaller year-round umrah pilgrimage was already suspended in March.

Together, they add $12 billion to the Saudi economy every year, according to government figures.

This year it would be "open for nationals and residents of the kingdom, limited to 60,000 pilgrims," the Hajj Ministry said. The pilgrimage, scheduled to be held in July, would be limited to those who have been vaccinated and are aged 18-65 with no chronic illnesses, it said.