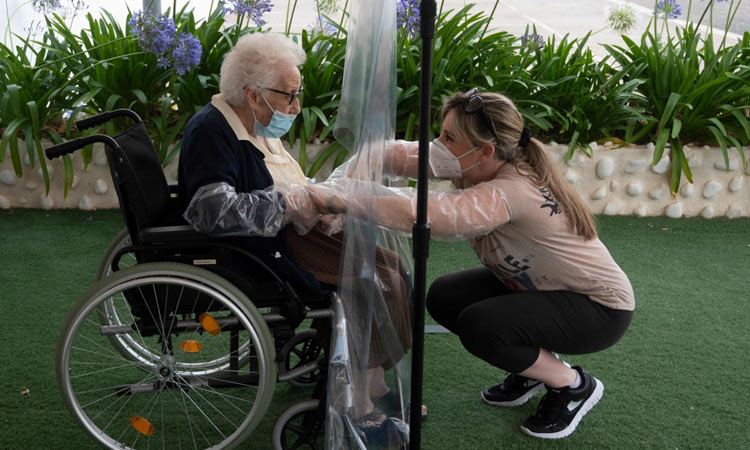 A woman holds her mother's hands through a plastic screen after visits were allowed at the Ballesol residence in Valterna, Spain. AFP

Global coronavirus infections topped nine million on Monday shortly after the WHO warned that the pandemic was accelerating, even as France took its biggest step yet back to normality by allowing millions of children to return to school. 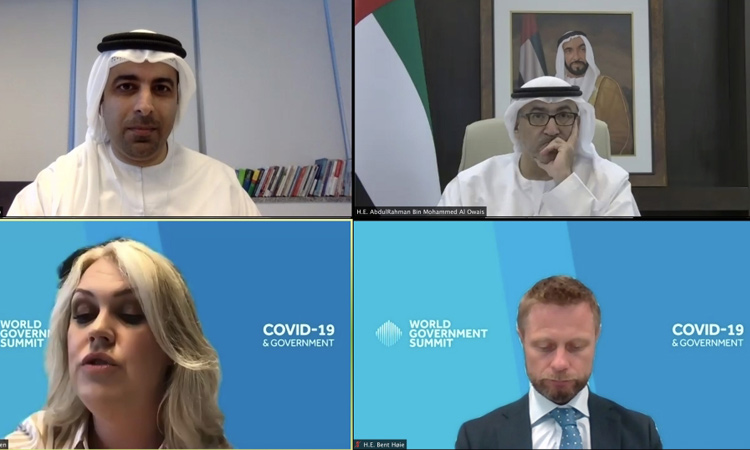 Top officials of the UAE and WHO during a videoconference. WAM

The comments by Tedros Adhanom Ghebreyesus, who has faced criticism from US President Donald Trump, came as the number of reported infections soared in Brazil, Iraq, India and southern and western US states, straining local hospitals.

It took over three months for the world to see 1 million virus infections, but the last 1 million cases have come in just eight days, Tedros said during a videoconference for the Dubai-based World Government Summit.

Tedros never mentioned Trump’s name or the fact that he is determined to pull the United States out of the UN health agency but warned against "politicising” the pandemic. 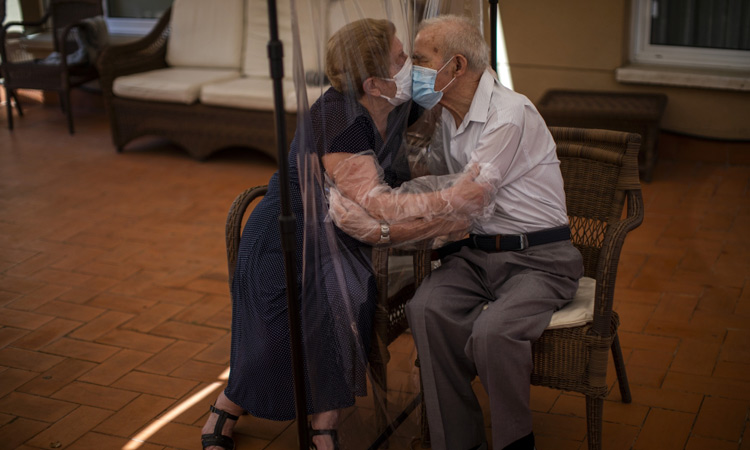 Agustina Cañamero, 81, and Pascual Pérez, 84, hug and kiss through a plastic film screen to avoid contracting the new coronavirus at a nursing home in Barcelona. Reuters

"The greatest threat we face now is not the virus itself, it’s the lack of global solidarity and global leadership,” he said. "We cannot defeat this pandemic with a divided world.”

Trump has criticised the WHO for its early response to the outbreak and what he considers its excessive praise of China, where the outbreak began, as his administration’s response in the US has come under scrutiny. In response, Trump has threatened to end all US funding for the WHO.

Nearly 9 million people have been infected by the virus worldwide and more than 468,000 have died, according to figures compiled by Johns Hopkins University. Experts say the actual numbers are much higher, due to limited testing and asymptomatic cases.

"The COVID-19 pandemic has demonstrated that, indeed, the world was not prepared,” Tedros said. "Globally, the pandemic is still accelerating.”

Companies around the world are racing to find a vaccine to counter COVID-19 and there is a fierce debate about how to make sure that vaccine is distributed fairly. 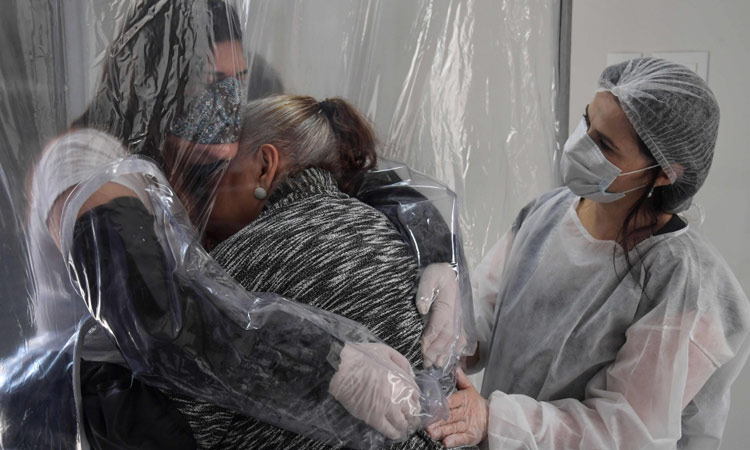 A woman holds her mother through a plastic curtain to protect her from coronavirus infection in Valterna. AFP

Speaking later in the conference, WHO's special envoy on COVID-19, Dr David Nabarro, said he believed it would be "2 1/2 years until there will be vaccine for everybody in the world.”

"Even if there's a candidate by the end of the year, the safety and efficacy tests will take some time,” the British physician said. "And then the effort has to be put into producing large amounts of vaccine so everyone in the world can get it and then organising the vaccination programmes.” He added: "I would love it to be proved wrong.”

In Germany, Chancellor Angela Merkel’s spokesman said "everything needs to be done” to control an outbreak linked to a large slaughterhouse has infected over 1,300 people. Authorities started mass testing of all workers at the Toennies meat plant in the western Guetersloh region and have put thousands of people into quarantine. Authorities have dispatched virologists, contact tracing teams and the German army to help.

"This is an outbreak that needs to be taken very seriously,” Merkel spokesman Steffen Seibert said.

After easing a nationwide lockdown, the Indian government ran special trains to return thousands of migrant workers to their villages in recent weeks. Nearly 90% of India's poorest districts have cases, although the outbreak remains centered in Delhi, Maharashtra and Tamil Nadu states, which are home to major cities.

In Pakistan, infections are accelerating and hospitals are having to turn away patients, with new cases up to 6,800 a day. The government has relaxed pandemic restrictions, hoping to salvage a near-collapsed economy as the number of people living in poverty has risen to 40% of the population of 220 million people.

In Iraq, masked workers were setting up makeshift coronavirus wards in Baghdad's vast exhibition grounds as a long-dreaded spike in infections strained its overstretched hospitals.

More than two-thirds of the new deaths of late have been reported in the Americas. The coronavirus has killed about 120,000 people across the US, over 50,000 in Brazil and nearly 22,000 in Mexico.

US authorities have reported more than 30,000 new infections a day recently but in New York City, once the epicenter of the US outbreak, Monday was a key day for lifting many coronavirus lockdown restrictions.

Yet Eve Gonzalez, a food industry worker in New York whose job hasn’t yet resumed, feels it’s too soon to relax restrictions.

"I’m dying to go out, but people’s health is more important,” said Gonzalez, 27.

Infections have slowed in China and South Korea, suggesting some progress in stemming their newest outbreaks. South Korea reported 17 new cases, the first time its daily increase fell to under 20 in nearly a month and Beijing’s increase was in single digits for the first time in eight days.

The UN Aids agency, meanwhile, warned that the pandemic could jeopardise the supply of Aids drugs in developing countries.

UN Aids said lockdowns and border closures adopted to stop the spread of COVID-19 were affecting both the production and distribution of the medicines, which could result in higher costs and deadly shortages in the next two months. As of last year, UN Aids estimated more than 24 million people were on life-saving anti-retroviral drugs. 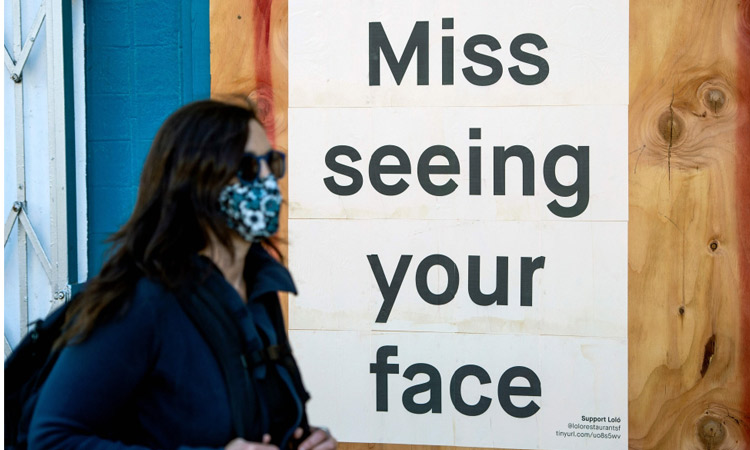