Ajman shuts down illegal slaughterhouse at a residence - GulfToday

Ajman shuts down illegal slaughterhouse at a residence 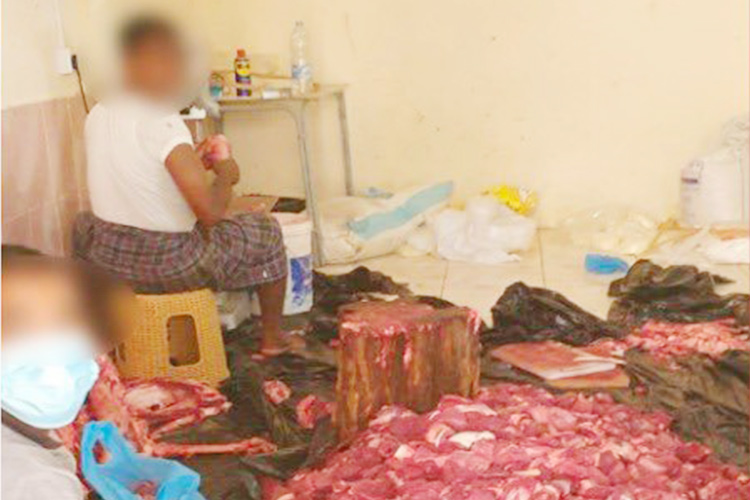 Ajman Municipality raided a residence that was turned into an illegal slaughterhouse by its inhabitants. The authorities arrested the residents for running the operation.

The slaughterhouse raised serious questions about the hygienic conditions.

The Public Health Administration team in the municipality, in cooperation with the Department of Economic Development Ajman, seized the residential house in Al-Rawda 1 area.

The authorities revealed that the residents performed unlicensed commercial activities in unhealthy ways.

Cows and sheep were slaughtered at home and sold to establishments and individuals.

6000 saplings handed over to civic body

Apart from the house, two other facilities were shut down for running illegal operations.

The municipality seized all related tools, and confiscated the goods in the two facilities, as they were stored in unlicensed warehouses.

Authorities have warned members of the public to refrain from such act, that puts the health of other at risk.

Last week, as part of Ajman DED’s efforts to monitor markets and economic facilities with the aim of enhancing commercial protection and protecting consumers, Control & Consumer Protection Department was able after field investigation to seize engine oils valued at Dhs 20 million that carried international trademarks in a factory in Ajman Industrial Area. 100,000 packs were confiscated, and the factory was immediately fined and closed.

Abdulla Ahmed Alhemrani, Assistant Director General for Economic Registration and Control affairs, said that Ajman DED makes all efforts to combat commercial fraud and counterfeit goods. To this effect, inspection campaigns are being regularly carried out to curb such practices that harm interests of investors and trademark owners, and pose risks to consumers and cause damage to their property in case of use of such products due to their incompliance with international specifications and standards.