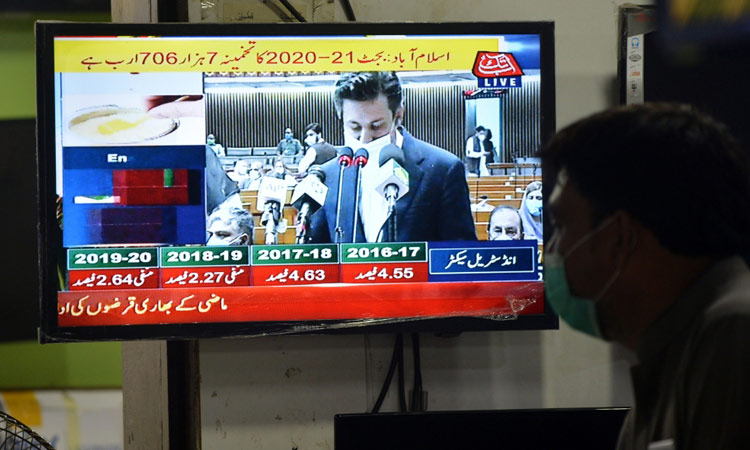 A man watches a live broadcast of the budget speech at a market in Karachi. AFP

To a chorus of boos from the opposition, the government announced plans to cut the overall budget by 11 per cent compared with last year, as revenues dried up and deficits soared in the impoverished nation.

No increase in the government employees’ salaries and pensions of retired civil servants was announced for the first time after many years. The government servants had been protesting for the past few weeks demanding raise.

“The entire world is suffering from the virus, even the most developed countries in the world,” said Azhar. “Pakistan continues to suffer from not just the virus but also from an economic point of view. But we haven’t given up and will continue to take actions to lift up our economy hurt by coronavirus lockdowns.”

For the first time, Pakistan’s economy contracted in the outgoing fiscal year due to adverse impact of the novel coronavirus coupled with economic stabilisation policies that had hit the industrial sector much before the deadly pandemic.

“After assuming charge in August 2018, the government kicked off efforts to improve the economy. Our aim was to eliminate corruption, improve institutions and strengthen the economy,” the minister said.

Pakistan’s economy was already on life support before officials began shuttering large segments of the economy in March as an array of lockdown measures were rolled out in effort to fight the spread of the coronavirus.

“It is difficult to say anything with certainty about the coronavirus’s impact ... but there is no doubt that our GDP — which we thought could grow around 3 per cent — will now go down by around 0.4 per cent,” Azhar told parliamentarians.

Pakistan has struggled for decades to collect sufficient taxes, piling pressure on successive governments over the decades to provide ample funding for the country’s ailing healthcare and education sectors.

Estimates suggest that only around one percent of the 200 million population filed a return in 2018. 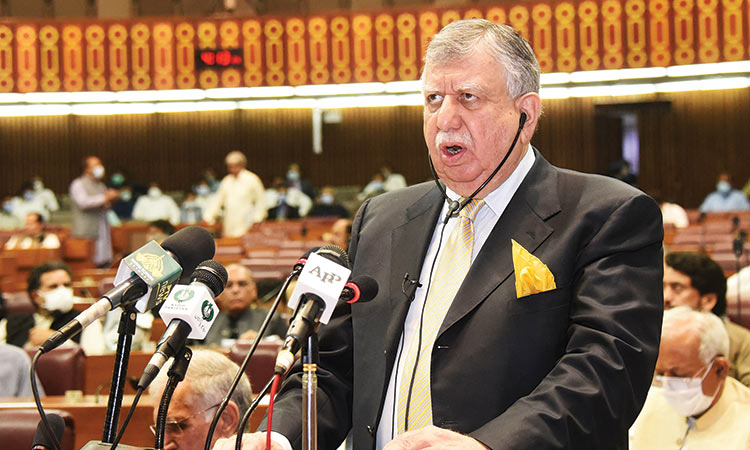 Pakistan announced Rs8.4 trillion ($54 billion) budget on Friday for the next fiscal year, basing it on an ambitious growth target of 4.5 per cent and tripling spending on public sector development with an election just two years away.