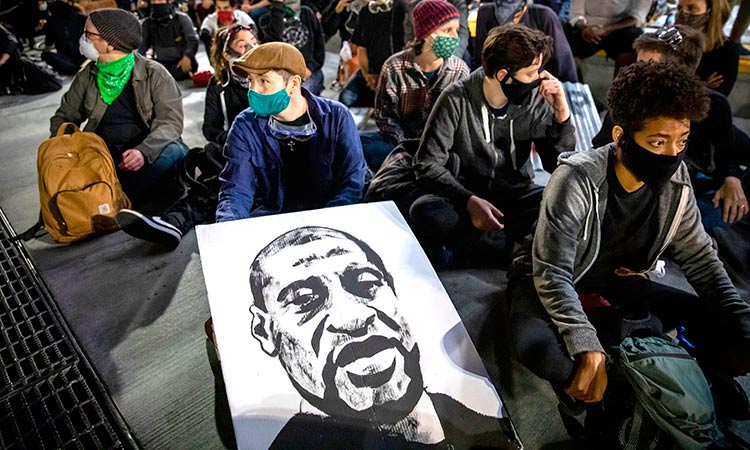 Demonstrators attend a “Sit Out the Curfew” protest against the death of George Floyd in Oakland, California, on Wednesday. AFP

A man armed with a knife stabbed a New York policeman in the neck on Wednesday and two officers who ran to his rescue were wounded before they shot the attacker multiple times, police said.

All four were taken to Kings County Hospital where the police were in stable condition and the suspect was in critical condition, police said.

The attack in Brooklyn came amid mass protests and some rioting in New York over the death in Minneapolis of George Floyd, an unarmed black man, while in the custody of white police officers.

It was not immediately clear if the attack was related to the protests, but Police Commissioner Dermot Shea said the police were on duty to stop looting. 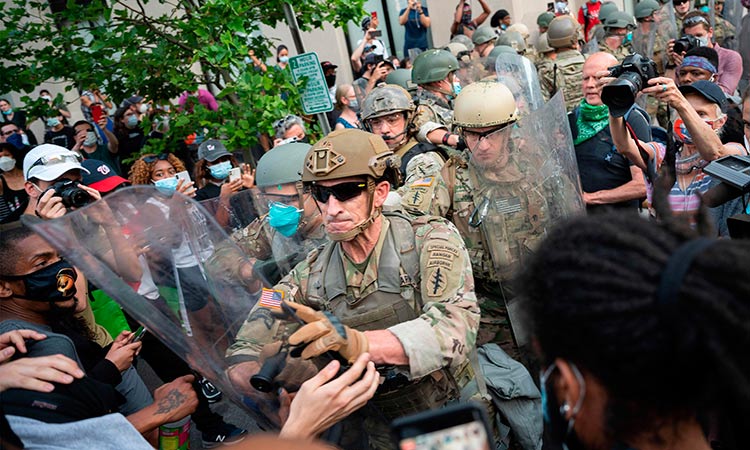 Protesters scuffle with members of the US Army in Washington, DC. /AFP

More than 10,000 people have been arrested in protests decrying racism and police brutality in the wake of George Floyd's death, according to an Associated Press tally of known arrests across the US.

The count has grown by the hundreds each day as protesters spilled into the streets and encountered a heavy police presence and curfews that give law enforcement stepped-up arrest powers.

Los Angeles has had more than a quarter of the national arrests, followed by New York, Dallas and Philadelphia. Many of the arrests have been for low-level offenses such as curfew violations and failure to disperse. Hundreds were arrested on burglary and looting charges. 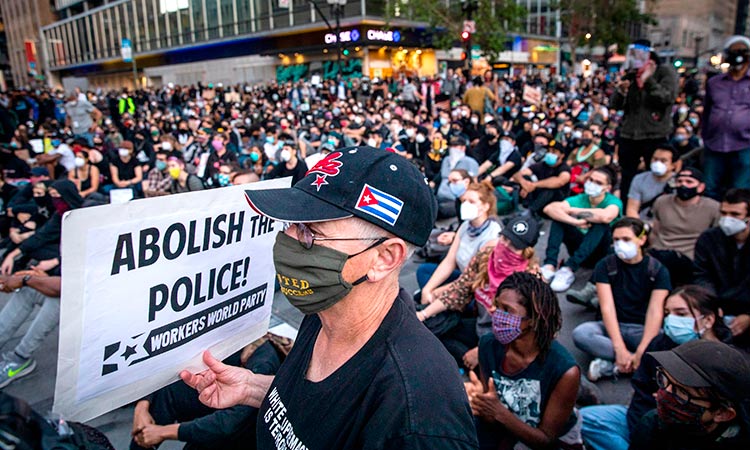 A demonstrator holds a sign during a "Sit Out the Curfew" protest in Oakland, California, on Wednesday. Philip Pacheco/AFP

As cities were engulfed in unrest last week, politicians claimed that the majority of the protesters were outside agitators, including a contention by Minnesota's governor that 80 percent of the participants in the demonstrations were from out of state.

The arrests in Minneapolis during a frenzied weekend tell a different story. In a nearly 24-hour period from Saturday night to Sunday afternoon, 41 of the 52 people cited with protest-related arrests had Minnesota driver's licenses, according to the Hennepin County sheriff.

In the nation's capital, 86 percent of the more than 400 people arrested as of Wednesday afternoon were from Washington, D.C., Maryland and Virginia.

It is not known how many of the people arrested were locked up - an issue at a time when many of the nation's jails are dealing with coronavirus outbreaks. The protesters are often placed in zip-ties and hauled away from the scene in buses. 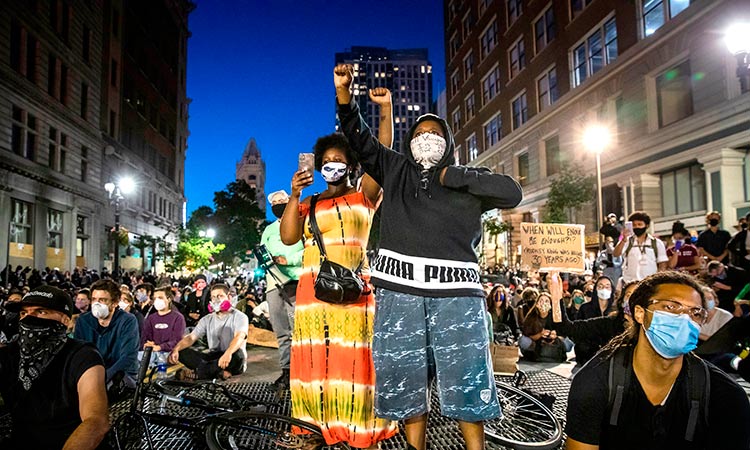 Demonstrators gesture during a “Sit Out the Curfew” protest against the death of George Floyd in Oakland, California. AFP

In Los Angeles, an online fundraising campaign has gathered $2 million so far to help more than 3,000 people arrested in demonstrations since Floyd died on May 25 in Minneapolis.

A Los Angeles group called the Peoples City Council Fund as of Wednesday night had gathered more than $2 million for arrested protesters there through the online fundraising platform gofundme. More than 46,000 people donated mostly small amounts, some just $10 or $20.

Fundraiser organizers said hundreds of thousands of the dollars raised will go to Black Lives Matter LA as well as the National Lawyers Guild, a progressive group that has been defending civil rights activists since the 1930s.