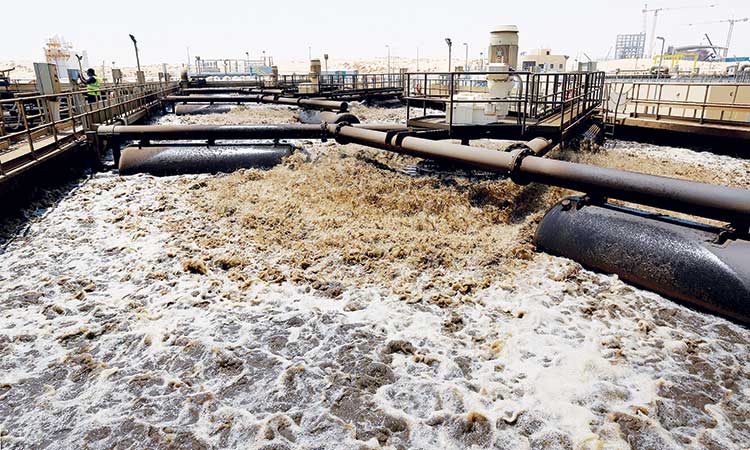 Rotating motors at one of the treatment areas of the Qatra Water Solutions in Sharjah aerate the murky gooey effluent to separate flotsam, bacteria and other organisms from the main water. Kamal Kassim / Gulf Today

The man-made lakes--a total of 15 so far--are located some 25 minutes away from downtown Sharjah pass the Sharjah International Airport and specifically within the Al Sajaa Industrial Area.

These are among the ongoing projects of the Qatra Water Solutions, the first-ever public-private partnership (PPP) joint venture of the Sharjah Investment and Development Authority, otherwise known as Shurooq, and the over-a-century-old BESIX, headquartered in Brussels, Belgium and a global major player in both the construction field and sustainability advocacy.

Gulf Today witnessed a flight of birds as one coated with maroon-blackish-white feathers opted do its one-leg perching at the greener portion of one of two lakes visited on late Thursday morning.

Dersel said plans are for these man-made lakes, not only grow in number but also expand or get extended as well, whereby its immediate vast desert surroundings be abloom in the near future by a nursery of varying flora.

These then would be among the focal areas of envisioned educational tours on how volumes upon volumes of effluent or sewage water could be brought back to life to add or bring more life.

Early on, Dersel explained that Qatra Water Solutions came into being by 2018 as a PPP of Shurooq and BESIX  “which aims to expand foreign direct investment in the wastewater infrastructure to contribute to the advancement of Sharjah’s economy, society and the environment.”

“We aim to fulfill the high standard of sustainability that lies at the heart of the values of the government of Sharjah,” said Dersel.

And speaking of sustainability, one of the best approaches to achieve this, is to concentrate on wastewater from various sectors and sections of the society with the use of the ever-improving expertise and technology, combined with enhanced interest and enthusiasm.

Especially so that among the reasons for the massive consumption of water in the UAE are “climate, the strongest factor, and high temperatures which directly impact on water consumption in agriculture and which accounts by itself for two-thirds of the total water consumption.”

Asked if indeed mankind saves on resources if wastewater were collected, treated and purified, Dersel commented: “Collecting and treating is an environmental and public health necessity. Wastewater can harm the environment if disposed untreated and holds pathogens that can be dangerous to humans. But once treated and purified, this water can be released to the sea, or re-used in landscaping or in non-drinking applications like district cooling.”

“It is when wastewater is directly re-used that it saves resources because it substitutes either to the limited and precious underground water, or to the desalinated water that is energy-intensive and relies on carbonated source. Directly reusing water contributes in reducing carbon emissions,” he further explained. Dersel added that treating wastewater means making it “a very rich water” that 95 per cent of the 35,000 cubic meters of wastewater, delivered to the treatment facility by 1,600 trucks a day, are re-usable for landscaping and irrigation. The 35,000 cubic meters of wastewater are ejected from all the residential, commercial and industrial zones in every 110,000 population in Sharjah.

While 1,600 trucks in three schedules deliver these to the plant every day, another set picks up the treated water. Otherwise, the un-picked treated water finds its way to the man-made lakes so nothing is wasted and biodiversity thrives.

Aeration is the first stage of the treatment wherein huge grumbling motors separate all microbes or bacteria and possible flotsam are separated from the water. The microbes, bacteria and flotsam become sludge which are then sundried, transported to the Sharjah Cement Factory some three kilometers away and which combines this with minimal amount of coal. In the near future, the sludge are also going to be converted into compost for the nursery surrounding the lakes.