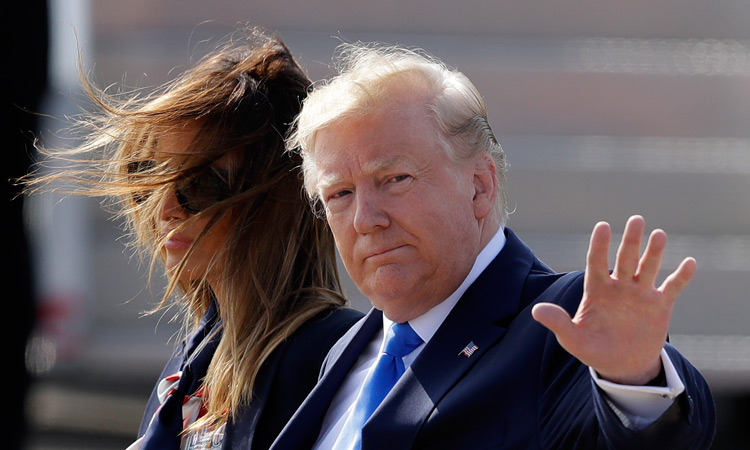 Twitter tagged just two of Trump's tweets in which he'd claimed that more mail-in voting would lead to what he called a "Rigged Election" this November.

There is no evidence that attempts are being made to rig the election and under the tweets Twitter posted a link which read "Get the facts about mail-in ballots."

For years, Twitter has been accused of ignoring the president's breaking of platform rules with his daily, often hourly barrages of personal insults and inaccurate information sent to more than 80 million followers.

But Twitter's slap on the wrist was enough to drive Trump into an early on Wednesday morning meltdown — on Twitter — in which he claimed that the right-wing in the United States is being censored.

"Republicans feel that Social Media Platforms totally silence conservatives voices. We will strongly regulate, or close them down, before we can ever allow this to happen," he said.

He dived right back into his narrative that an increase in mail-in ballots — seen in some states as vital for allowing people to avoid crowds during the COVID-19 pandemic — will undermine the election.

"We can't let large scale Mail-In Ballots take root in our Country. It would be a free for all on cheating, forgery and the theft of Ballots.

"Whoever cheated the most would win. Likewise, Social Media. Clean up your act, NOW!!!!" he wrote.

The president, whose reelection strategy has been knocked off track by the coronavirus pandemic, likewise accused social media platforms of interfering in the last election, saying "we saw what they attempted to do, and failed, in 2016."

An unrepentant Trump also recommenced spreading a conspiracy theory about a prominent television critic, Joe Scarborough, whom the president is trolling with accusations that he murdered a woman in 2001.

"Psycho Joe Scarborough is rattled, not only by his bad ratings but all of the things and facts that are coming out on the internet about opening a Cold Case. He knows what is happening!" Trump tweeted.

There has never been any evidence that Scarborough, a host on MSNBC, had anything to do with the death of Lori Klausutis, who was a staffer in his office when he was a Republican Congressman.

She was found by investigators to have died after hitting her head during a fall, triggered by an abnormal heart rhythm.

However, the rumor has been pushed for years and Trump is its latest, easily highest profile promoter, refusing to stop even after Klausutis' widower made an impassioned appeal to halt the "vicious lie."

"I'm asking you to intervene in this instance because the President of the United States has taken something that does not belong to him — the memory of my dead wife and perverted it for perceived political gain," he wrote in a letter to Twitter, published Tuesday by The New York Times.

Twitter said in a statement that it was "deeply sorry" about the family's "pain," but did not take any action against Trump's tweets.

For all his protests, Trump is a political giant on social media.

His campaign takes huge pride in its enormous presence on Facebook, Twitter and other platforms that are tied into an unprecedented level of funding and data collection.

Before being elected in 2016, Trump built his political brand by supporting the "birther" lie that Barack Obama, America's first black president, was not born in the United States and therefore was not eligible to be president.

Now that he faces Obama's vice president Joe Biden as the Democratic challenger in November, Trump is again using Twitter to attack the popular Obama. Trump's claim that the Democrat was part of a "coup" attempt during the early days of his administration has a Twitter hashtag #ObamaGate that the president publishes regularly.