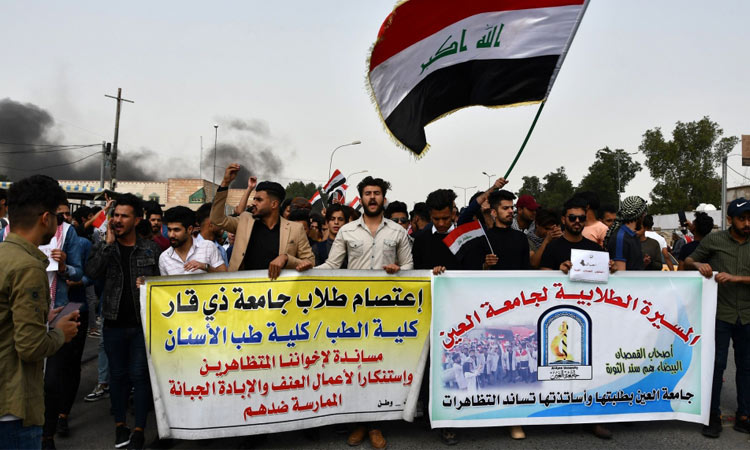 It was supposed to be Basma's big year: a degree, language certification and maybe a master's abroad. But local protests and a global pandemic threw the Iraqi student's plans off-course.

"I've been dreaming of graduation since my first day at university. I even bought a coral pink graduation dress — and I never wear dresses," said Basma, who studies at Baghdad's Mustansariyah University. "Now I don't know when I can wear it." 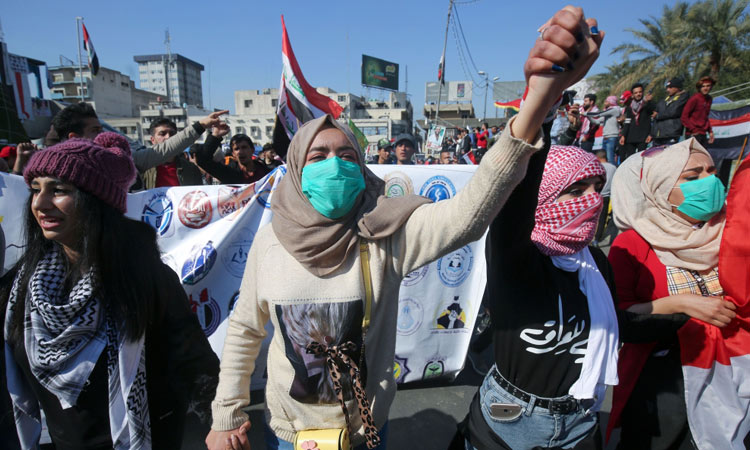 Students hold hands and chant as they march in an anti-government demonstration in Tahrir square, Baghdad. AFP

Nearly 150,000 Iraqis may not graduate as planned this spring, according to the higher education ministry's spokesman Haider Al Abboudi, as their universities were shut down first by mass anti-government protests, then the spreading coronavirus.

That will delay their hunt for jobs in a country where youth unemployment is already a staggering 36 percent and is likely to spike much higher as the country faces a financial crisis.

Basma Haitham, 23, had meticulously planned her studies so she could secure a rare private sector job in Iraq.

Once armed with a degree in English literature, she hoped to take two language certifications then pursue a master's in either business administration or interpretation.

But then the protests erupted. 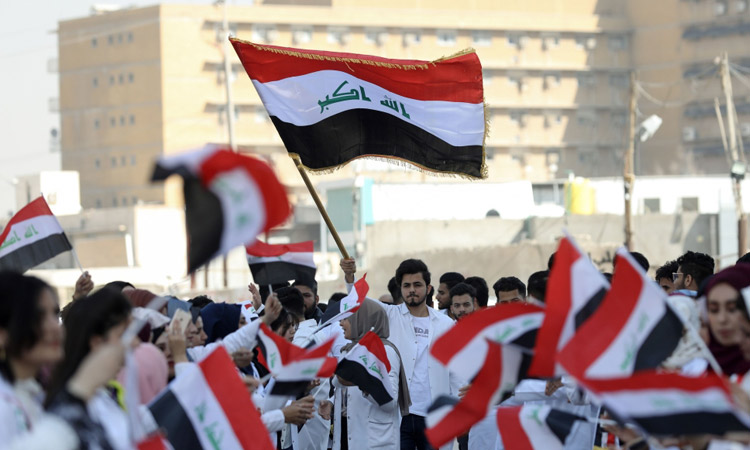 Medical students wave the national flag as they take part in an anti-government protest in Basra. File / AFP

The rallies demanding the overhaul of a political class seen as corrupt, inept and beholden to neighbouring Iran broke out in Baghdad and the country's Shiite-majority south on Oct.1 — the first week of class.

Leaving their classrooms behind, students took a leading role by organising strikes, erecting protest tents named after their academic departments and staging marches to buoy the movement when it dwindled.

"Sometimes I'd go without my parents knowing," Basma said.

But something else had been bubbling: the coronavirus.

Just as students prepared to take the rescheduled exams, the government shut down all major gathering places — including universities — to forestall the spread of the virus. 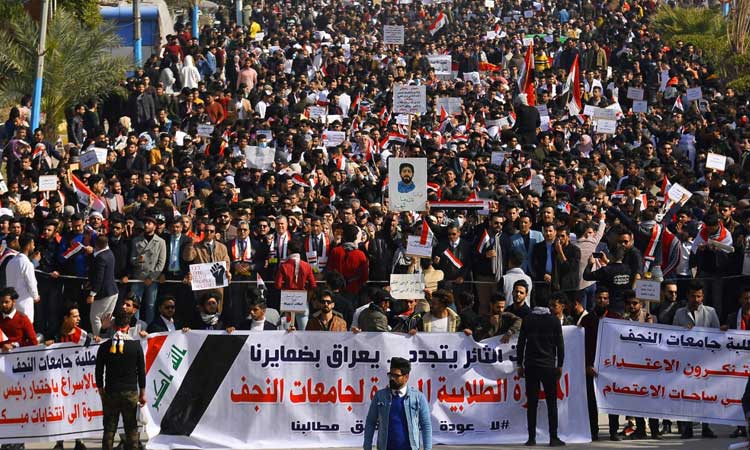 Some classes have continued online, but with no exams or final projects, long-awaited graduation ceremonies have been put off, as have international scholarships.

According to the US embassy in Baghdad, between 200 and 250 students who were meant to study in the US this year will not be able to travel, due to coronavirus movement restrictions.

"The whole atmosphere of graduation, of farewell — we won't live any of it," said Raneen Al Khalili, 25, who studies telecommunication engineering at Al Mamoun University College in Baghdad.

The higher education ministry will announce a schedule for final exams "soon," including logistical guidelines to keep students healthy, its spokesman Abboudi said.

But for Mayyada Mohammad, 23, it is already too late.

To graduate, the Baghdad University fine arts student must complete a final sculpting project in the university studio, closed for more than two months now.

"The latest thing we heard was that we'd start projects next year, so we'd graduate a year late. But some of us can't afford that. We need to start working," she said.

She joined the anti-government protests last year but admitted the weak turnout lately had discouraged her from returning to the streets.

"This whole year slipped through our fingers. It's like it never happened," she told AFP from her home in Baghdad.

"Now it's all Netflix, all the time."

More than 60 per cent of Iraq's population of 40 million is under 25 and it is estimated there will be another 10 million by 2030.

Most senior students rely on the government's socialist-era programme of mass hiring, where recent graduates are allocated jobs in the country's bloated public sector.

But the government has struggled to absorb the new waves of graduates in recent years, which has worried 22-year-old medical student Sajad Matar.

"I was supposed to graduate this year but my heart is telling me it's not going to happen," he lamented.

The class of 2019 from the private university he attends had yet to be appointed to government jobs, making it unlikely he would get selected before the end of 2021.

That means he will stay at home with his parents in Nasiriyah, another protest hotspot, without the 700,000 Iraqi dinars (about $600) monthly salary he had expected.

"But there's no work in Nasiriyah for me. Of course I'm afraid for my future — I've lost all hope."