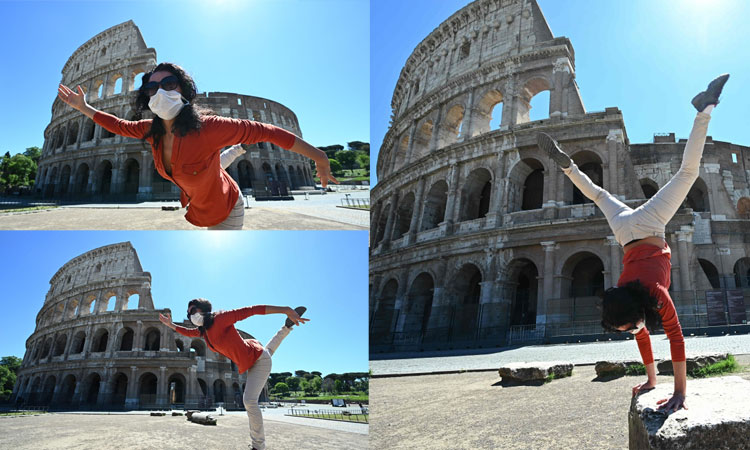 A woman exercises during the lockdown in Milan, Italy.

Italian shops, restaurants and churches reopened their doors to spring sunshine on Monday, Greece welcomed visitors back to the Acropolis — and Spain hoped for tourists to return in summer in cautious steps to ease coronavirus lockdowns. 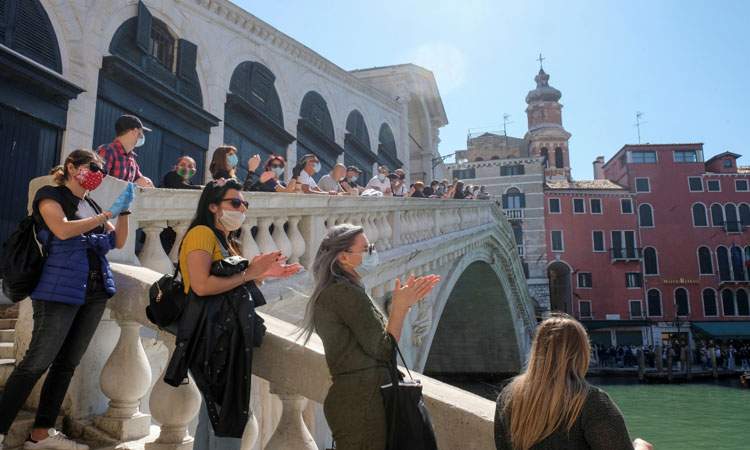 Italians celebrate after the government eases lockdown in Milan.

Italians could once again sip their morning cappuccino at the bar, albeit at a distance from one another, in what Prime Minister Giuseppe Conte admitted at the weekend was a "calculated risk" in rolling back the curbs.

"I haven't worked for two and a half months. It's a beautiful, exciting day," said Valentino Casanova, a barman in Caffe Canova in Rome's central Piazza del Popolo. 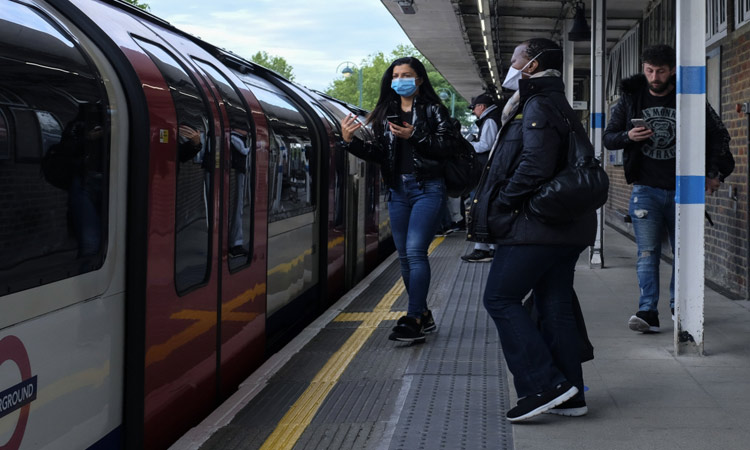 Commuters wearing masks to protect against coronavirus stand on the platform at Leytonstone underground station in London. AP

Countries around the world, at different stages in the pandemic, are wrangling with decisions on when to ease restrictions, weighing the threat to life against the threat to economic survival. Summer tourism is a major earner for Italy, Greece and Spain.

World Health Organisation (WHO) chief Tedros Adhanom Ghebreyesus warned countries against reopening too early and said "we have a long road to travel". 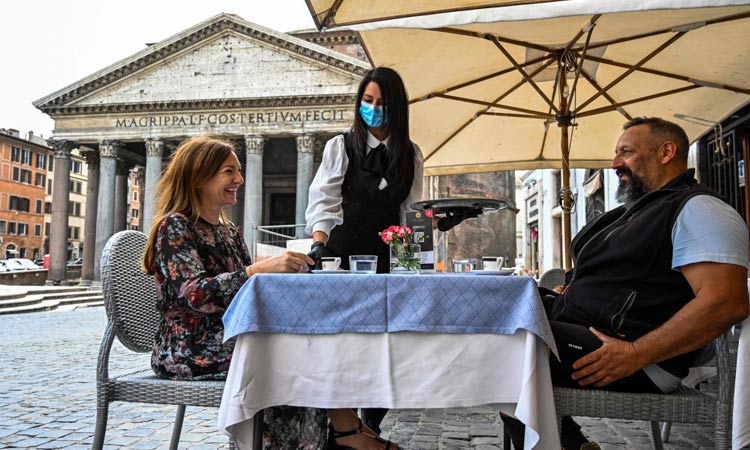 A waiter serves coffee to customers at a cafe terrace by the Pantheon monument in central Rome. AFP

More than 4.71 million people are reported to have been infected by the coronavirus and 312,826 have died, according to a Reuters tally. Italy has the third highest death toll after the United States and Britain.

In Greece, which has recorded only 156 COVID-19 deaths, people flocked to the seaside on Saturday and were allowed back in church the next day. 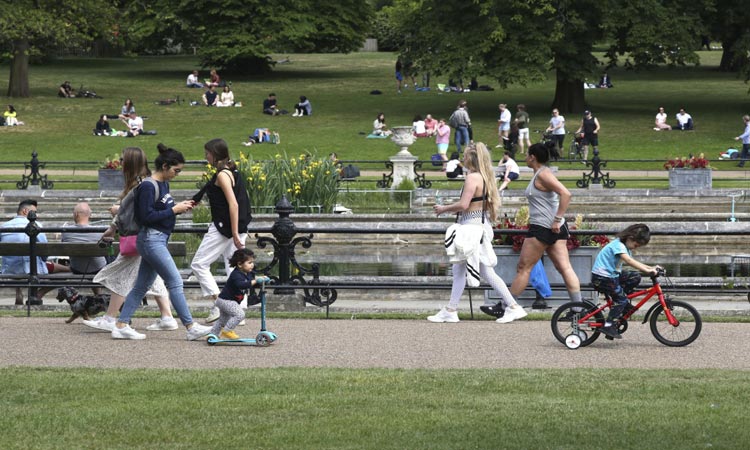 On Monday, tourists were allowed back at ancient monuments, including the Acropolis in Athens, where workers wearing masks and plastic face shields reminded the few visitors of social distancing rules as they entered the turnstiles.

"I visited the Acropolis today, a world monument that continues to inspire with its marbles shining under the sun," said President Katerina Sakellaropoulou. 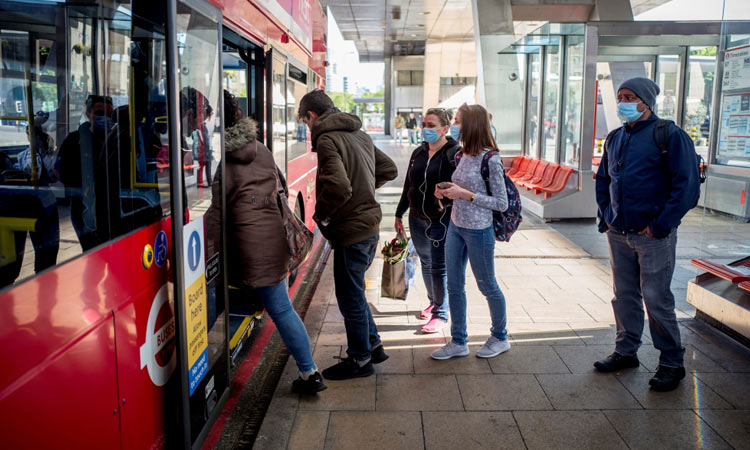 Commuters wearing face masks as a precautionary measure against COVID-19, wait to board a bus in. AFP

Spain aims to reopen its borders to tourists around the end of June, Transport Minister Jose Luis Abalos said, after it surprised its EU partners last week by imposing a two-week quarantine on overseas travellers, effectively shutting its borders.

Abalos said it would be phased out in parallel with travel being allowed within Spain, whose regions are all leaving lockdown at different phases.

"From late June, we'll start tourism activity, I hope," he said. "We must make Spain an attractive country from the health point of view."

Neighbouring Portugal reopened cafes, and children wearing masks went back to school for the first time in months.

Four weeks into an early but gradual easing of their lockdown, Danes were again able to enjoy a latte at their local café.

"The quick shutdown and the fact that Danes actually listened to messages from authorities about good hygiene and social distancing are the main reasons we've come this far," said Hans Jorn Kolmos, a professor in clinical microbiology at the University of Southern Denmark. 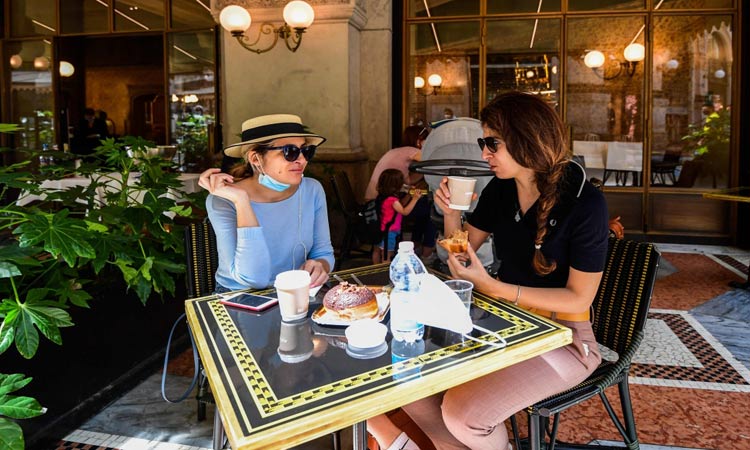 Women have coffee and pastry at Cafe Cracco in Milan. AFP

Danes being less prone to hugging and kissing as a form of greeting had also been a factor, he said.

Many people across England travelled to parks and beaches to enjoy the sun at the weekend after British Prime Minister Boris Johnson relaxed lockdown curbs. Scotland, Wales and Northern Ireland told people they should still stay at home.

Johnson's government has been accused by the opposition Labour Party of responding too slowly and late to an outbreak that has now produced the world's second highest death toll - something the government denies.

Michael O’Leary, chief executive of the Irish budget airline Ryanair, said Britain had mismanaged its response and he denounced a forthcoming 14-day quarantine for international travellers.

"It is idiotic and it is unimplementable," he told BBC radio. "This the same government that has ... mismanaged the crisis for many weeks."